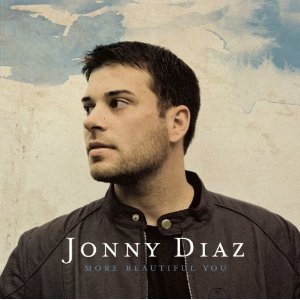 Main Point: God has created us just as He wants us. Our beauty isn’t found in shallow appearances but in our deeper purpose.

Discussion Starter:
On his official website, Jonny Diaz says his “mission in life is to serve the Body of Christ.” The Christian singer/songwriter describes his music in the following way: “I attempted to break free from some of the traditional confines of Christian music, but I couldn’t get away from the fact that most of my songs revolve around my relationship with Christ. He is the focus of my life and I find it impossible to honestly record my emotions and my journey without including Him.”

Little girl fourteen flipping through a magazine
Says she wants to look that way
But her hair isn’t straight, her body isn’t fake
And she’s always felt overweight

Well, little girl fourteen I wish that you could see
That beauty is within your heart
And you were made with such care, your skin, your body and your hair
Are perfect just the way they are

Well, little girl twenty one you never thought that this would come
You starve yourself to play the part
But I can promise you there’s a man whose love is true
And He’ll treat you like the jewel you are

So turn around you’re not too far
To back away be who you are
To change your path go another way
It’s not too late, you can be saved
If you feel depressed with past regrets
The shameful nights hope to forget
Can disappear, they can all be washed away

By the one who’s strong, can right your wrongs
Can rid your fears dry, all your tears
And change the way you look at this big world
He will take your dark distorted view
And with His light, He will show you truth
And again you’ll see through the eyes of a little girl

Transitional Statement:
In this song, Jonny Diaz tells his listeners “there could never be a more beautiful you.” What a great message for us to ponder. Those words are comforting because they are true. So many of us today are pursuing a beauty that is temporary. Diaz points out that so many of us are willing to do whatever it takes – jump through hoops, buy lies, and wear disguises – to be considered beautiful. Ironically, the truth is, we can never be more beautiful than when we are fulfilling the purpose God has for us. Let’s talk about that now.

CONTEXT: King Xerxes was a powerful ruler who had conquered the lands of God’s people. The Jews were living under his rule when this story takes place. The king clearly liked to party, but he also had difficulty with his wife, Queen Vashti. In chapter one, she basically shuns him publically, so he has her removed from power, and a search started for another queen to replace her.

Later when the anger of King Xerxes had subsided, he remembered Vashti and what she had done and what he had decreed about her. 2 Then the king’s personal attendants proposed, “Let a search be made for beautiful young virgins for the king. 3 Let the king appoint commissioners in every province of his realm to bring all these beautiful girls into the harem at the citadel of Susa. Let them be placed under the care of Hegai, the king’s eunuch, who is in charge of the women; and let beauty treatments be given to them. 4 Then let the girl who pleases the king be queen instead of Vashti.” This advice appealed to the king, and he followed it. 5 Now there was in the citadel of Susa a Jew of the tribe of Benjamin, named Mordecai son of Jair, the son of Shimei, the son of Kish, 6 who had been carried into exile from Jerusalem by Nebuchadnezzar king of Babylon, among those taken captive with Jehoiachin king of Judah. 7 Mordecai had a cousin named Hadassah, whom he had brought up because she had neither father nor mother. This girl, who was also known as Esther, was lovely in form and features, and Mordecai had taken her as his own daughter when her father and mother died. 8 When the king’s order and edict had been proclaimed, many girls were brought to the citadel of Susa and put under the care of Hegai. Esther also was taken to the king’s palace and entrusted to Hegai, who had charge of the harem. 9 The girl pleased him and won his favor. Immediately he provided her with her beauty treatments and special food. He assigned to her seven maids selected from the king’s palace and moved her and her maids into the best place in the harem. 10 Esther had not revealed her nationality and family background, because Mordecai had forbidden her to do so. 11 Every day he walked back and forth near the courtyard of the harem to find out how Esther was and what was happening to her. 12 Before a girl’s turn came to go in to King Xerxes, she had to complete twelve months of beauty treatments prescribed for the women, six months with oil of myrrh and six with perfumes and cosmetics. 13 And this is how she would go to the king: Anything she wanted was given her to take with her from the harem to the king’s palace. 14 In the evening she would go there and in the morning return to another part of the harem to the care of Shaashgaz, the king’s eunuch who was in charge of the concubines. She would not return to the king unless he was pleased with her and summoned her by name. 15 When the turn came for Esther (the girl Mordecai had adopted, the daughter of his uncle Abihail) to go to the king, she asked for nothing other than what Hegai, the king’s eunuch who was in charge of the harem, suggested. And Esther won the favor of everyone who saw her. 16 She was taken to King Xerxes in the royal residence in the tenth month, the month of Tebeth, in the seventh year of his reign. 17 Now the king was attracted to Esther more than to any of the other women, and she won his favor and approval more than any of the other virgins. So he set a royal crown on her head and made her queen instead of Vashti.

CONTEXT: As the story continues, Hamaan, the king’s evil right hand man, drafts a plot to kill every Jew in Xerxes’ kingdom on a certain day. He sends out the plans to every province in the kingdom. God’s people will be utterly wiped out. This greatly distresses Mordecai, so he goes to Queen Esther and asks her to help, knowing full well it is a huge risk for her. Let’s see what happens.

When Mordecai learned of all that had been done, he tore his clothes, put on sackcloth and ashes, and went out into the city, wailing loudly and bitterly. 2 But he went only as far as the king’s gate, because no one clothed in sackcloth was allowed to enter it. 3 In every province to which the edict and order of the king came, there was great mourning among the Jews, with fasting, weeping and wailing. Many lay in sackcloth and ashes. 4 When Esther’s maids and eunuchs came and told her about Mordecai, she was in great distress. She sent clothes for him to put on instead of his sackcloth, but he would not accept them. 5 Then Esther summoned Hathach, one of the king’s eunuchs assigned to attend her, and ordered him to find out what was troubling Mordecai and why. 6 So Hathach went out to Mordecai in the open square of the city in front of the king’s gate. 7 Mordecai told him everything that had happened to him, including the exact amount of money Haman had promised to pay into the royal treasury for the destruction of the Jews. 8 He also gave him a copy of the text of the edict for their annihilation, which had been published in Susa, to show to Esther and explain it to her, and he told him to urge her to go into the king’s presence to beg for mercy and plead with him for her people. 9 Hathach went back and reported to Esther what Mordecai had said. 10 Then she instructed him to say to Mordecai, 11 “All the king’s officials and the people of the royal provinces know that for any man or woman who approaches the king in the inner court without being summoned the king has but one law: that he be put to death. The only exception to this is for the king to extend the gold scepter to him and spare his life. But thirty days have passed since I was called to go to the king.” 12 When Esther’s words were reported to Mordecai, 13 he sent back this answer: “Do not think that because you are in the king’s house you alone of all the Jews will escape. 14 For if you remain silent at this time, relief and deliverance for the Jews will arise from another place, but you and your father’s family will perish. And who knows but that you have come to royal position for such a time as this?”

Wrap Up:
The search for temporary beauty is never-ending. Each year, Americans spend billions of dollars on beauty care products to help them gain or sustain attractiveness. But sadly, they don’t really stand out or achieve their greatest beauty.

That’s because beauty is also deeply tied to our purpose in life. Think about it like this. If we see an old woman holding the hand of her elderly husband, we consider that beautiful. If we see a mother caring for a sick child, we think she’s beautiful. It’s even understandable when we look at material things such as race cars. When we see powerful engines and sleek lines hurtling toward the finish line, we say, “That’s a thing of beauty!” So, see, our beauty is tied to our purpose.

We saw that truth played out in the life of Esther. She was pretty enough to capture the attention of a wild and partying King, but her true beauty was revealed when she stepped up to her life’s purpose which was saving her people from destruction.

You may spend a lot of time on your mani/pedi, but how much time are you spending on your purpose? Are you combing through your hair without combing through God’s Word searching for His will? Are you working out in the gym, but never “working out your salvation” as Paul says in Philippians?

God has made us just the way we are, and we are truly beautiful because we are His. Make sure you stay that way by accomplishing His purposes in your life.