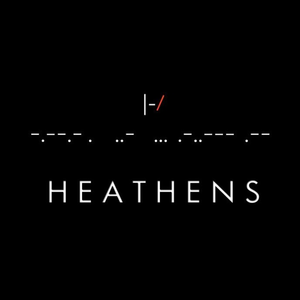 Main Point of Discussion:
Jesus wants us to be wise in how we tell others about Him.

Introducing The Song:
Twenty One Pilots just made another headline this week as their third song this year rose to number one on the Billboard hot rock songs chart. Most of the buzz around this achievement comes from the fact that they replaced themselves on the chart and pushed their song “Ride” into second place. If you include their other number one song this year, “Stressed Out,” they have occupied spot one (as of this week) for 33 weeks this year marking a new record in the category. They are clearly one of the most popular rock acts in the US right now.

“Heathens,” their latest hit comes from the soundtrack to the movie Suicide Squad and marks the first time that Twenty One Pilots has been hired to write a song for someone else. Lead singer Tyler Joseph makes the quick disclaimer that, “even though the themes in the movie inspired the beginning of it, as the lyrics came together, and as the song came together, I realized, like, this was our song.”

While the song has numerous references to themes in the film, it also can be interpreted on several different levels. Like many other Twenty One Pilots songs, the internet has been abuzz with theories as to the multiple meanings of the song. The lyrics have obvious spiritual implications and Tyler has stated in many interviews that he is in fact a Christian. But in typical fashion, the band remains very cryptic about the meaning of their lyrics, allowing their fans to do their own interpretive work.

The Music Video:
The video can be found for free at https://www.youtube.com/watch?v=UprcpdwuwCg

We don’t deal with outsiders very well
They say newcomers have a certain smell
You have trust issues, not to mention
They say they can smell your intentions

Why’d you come, you knew you should have stayed
(it’s blasphemy)
I tried to warn you just to stay away
And now they’re outside ready to bust
It looks like you might be one of us
Transitional Statement:
According to the Oxford Dictionary, the word “heathen” means “a person who does not belong to a widely held religion (especially one who is not a Christian, Jew, or Muslim) as regarded by those who do.” It is generally a derogatory term that can also mean unenlightened, or someone who lacks culture or moral principles. So when the chorus begins with “all my friends are heathens,” they are clearly talking about how outsiders are often perceived or treated poorly. But when the words come from someone who claims to be a Christian, it is hard not to see the spiritual implications. Consequently, one pretty obvious interpretation of the song is about how Christians should relate to those who don’t know Jesus.

Read the following passage in the Bible:

Matthew 5:16 (NIV)
14 “You are the light of the world. A town built on a hill cannot be hidden. 15 Neither do people light a lamp and put it under a bowl. Instead they put it on its stand, and it gives light to everyone in the house. 16 In the same way, let your light shine before others, that they may see your good deeds and glorify your Father in heaven.

Wrap Up:
It is very common for communities to grow around people with similar beliefs and values. Let’s face it – it’s way more comfortable than hanging out with people who see life from a different view. As Christians, even we often find it easier to surround ourselves with people who see the world in the same way we do. Many times that means that we never have relationships with people who aren’t Christians. And then, when we do talk to them, we just preach at them instead of actually loving them and spending time getting to know them and building a real friendship. But in reality, Christians are called to something much more difficult and rewarding. When Jesus came into the world, He changed things up. He asked us to be lights shining for Him.

To many people outside of the Christian faith, we are seen as people who always have an agenda. They are very aware that we will only treat them better when they start to think the way that we do.

Jesus didn’t do things that way. He loved all sorts of broken people and was constantly criticized by the religious snobs of the day for hanging out with them. But Jesus would usually turn the criticism around on the religious people and point out that they were often even worse than the ones that they despised so much (because they should have known better).

When we isolate ourselves from people who don’t know Jesus, we are in turn, hiding our light under a basket. Jesus wants us to shine our light as if we are a city on a hill. This means that we actually need to connect with our neighbors, even if they may view the world much differently than we do.

Does this mean you should make your inner most circle of friends people who don’t know Jesus and actually draw you away from your faith? Not at all. Again, look to Jesus’ example. He surrounded himself with other believers who shared the same faith, conviction and mission to reach others. It was with this core group of believers that he went out and reached the lost.

Jesus didn’t just hang out in the tabernacle all day and hang out with religious people. Jesus and his disciples built relationships with all kinds of sinners.

Evangelism is about relationships. As people see us living out lives of hope, love and honesty, they may desire to be in relationship with Jesus because of our example (and our words). We should aspire to shine as brightly as we can by deepening our own relationships with Jesus. Perhaps Twenty One Pilots are on to something wise with their advice to “take it slow” and “wait for them to ask you who you know.”