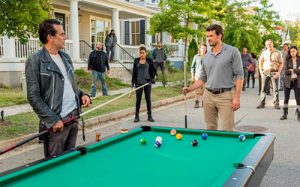 I remember one time in Jr. High I even decided to not take a side, and it still haunts me to this day. My buddy was getting beat up by a group of large individuals and I was too afraid to step in. My friend went to the hospital, and if I had stepped in, I would have probably been there too. But I still wish that I had made a different decision. I felt like I chose the wrong side, even though I didn’t do anything. But one thing I learned that day is that you always choose a side, even if you do nothing. It is no surprise that my relationship with my buddy fell apart shortly thereafter.

The first half of season 7 of The Walking Dead has been all about choosing sides. Painfully, each week we have had to watch our favorite characters make decisions as to what side they are on. Negan clearly wants everyone to think that there are no sides – just a choice to live or not to live. He is counting on people choosing to do nothing, an obvious win for Negan.

But others have been struggling all season to figure out what to do with Negan. Morgan and Carol have been sitting out of this fight, but does that mean a vote for Negan? Rosita picks a side by making Eugene make a bullet for her, but her decision backfires horribly in this episode. She may have inadvertently helped Negan solve his ammunition problem. Maggie and Sasha have been quietly taking over Hilltop by simply being good leaders. But they definitely are ready for a fight. Michonne proved tonight that she is still in the same fight she was in before Glenn and Abraham’s death (and she now has a silencer). And by the end of the episode, Rick and everyone else seem to be ready to rumble.

But for most of the season, it has been pretty hard to know what was going on in Daryl’s mind. I knew that he wasn’t joining Negan, but was his fear giving in to him? Was he on the way to becoming a little crazy like we have seen so many times on the show? I honestly didn’t know if, when he escaped, he was just going to wander around the woods humming “Easy Street” and eating squirrels. But, tonight we sure found out more about his state of mind.

It all became clear when he ran into Fat Joey during his escape. (The greatest name ever!)

Fat Joey: It’s cool, I swear. Buddy, you can walk right out that back gate there, and I won’t say anything to anybody. I’m supposed to be there now, but, listen, I’m – I’m just trying to get by, just like you. Please…

It was great to hear Daryl actually speak his mind.

His choice to kill Fat Joey might have seemed cruel to some. Was it?

Ask yourself. Is eating Negan’s food and enjoying Negan’s spoils any different to hitting Glenn and Abraham on the head with Lucille? Is watching and doing nothing just?

Doing nothing in this situation is part of what keeps Negan in power. Actually working for Negan in his compound? That makes you guilty if you’re on the side of justice like Daryl, Rick, Michonne, Maggie and the others. Daryl is on a road where there is no turning back, and I can’t wait to see what happens with him on the second half of the season. (Also, that hug between Daryl and Rick? …crocodile tears.)

But there was probably no better illustration of taking sides than when it came to Spencer. We have seen many characters like this on TWD, but we have never seen it come to such a decisive ending. Like Gregory at Hilltop, Spencer hopes that he can just slide into a position of leadership and enjoy the spoils of war. But Negan has probably dealt with a lot of Spencers in his day and knows that these kind of people are much more trouble than they are worth.

Sadly, Spencer definitely chose the wrong side. Maybe he thought that Negan would reward his betrayal of Rick. Or maybe he just felt like it was time to hitch his wagon to the winning horse. Either way, his calculation was deadly, and hopefully a warning to others to be careful when picking sides. (And a little ironic that it was Negan who hammered the gavel of justice.)

As I was watching tonight’s episode, I couldn’t help but think of probably the Bible’s greatest example of choosing the wrong side – Judas Iscariot. Now I know that there has been a little bit of backlash on the traditional view of Judas being a greedy turncoat responsible for the death of Jesus. And while I know that Jesus was going to get on that cross with or without Judas, I still think that Judas stands as someone who made a terrible decision. I also believe that the story is in there to remind us that even the closest followers of Jesus can make terrible decisions with terrible consequences.

We know from the book of John that Judas had some serious character flaws. John says in chapter 12 that Judas was a thief and that he stole from the money that he was supposed to be entrusted with for Jesus and the disciples. This was pointed out after a woman poured priceless perfume on Jesus and Judas got very upset. The text says that Judas was upset because they could feed the poor with that money. (Have you ever heard anyone in church make that argument?) Judas was greedy and he was prone to fake piety. Of course, this was all just a pretext to one of the worst decisions made in the Bible. Just look at Matthew’s account of the seeds of his betrayal.

14 Then Judas Iscariot, one of the twelve disciples, went to the leading priests 15 and asked, “How much will you pay me to betray Jesus to you?” And they gave him thirty pieces of silver. 16 From that time on, Judas began looking for an opportunity to betray Jesus. (Matthew 26:14-16, NLT)

Later on, he does take the money and he does lead the priests to Jesus where He is arrested. This is where Judas would identify Jesus to the soldiers of the High Priest by kissing Him. The image is just terrifying. Jesus’ last encounter with a man who spent three years travelling with Him, would be a betrayal sealed with a kiss. I can’t imagine what that must have been like to witness.

But for Judas the story doesn’t end well. If you look at the account at the beginning of Acts, you see that he comes to an end not unlike Spencer (there is no question that TWD was referencing the original betrayal with the way that he dies). Judas made the worst mistake of his life, and unlike the other disciples who also made terrible mistakes, Judas just runs and hides in order to feel sorry for himself. He dies shortly thereafter, and his name would become synonymous with the word betrayal. Did you ever notice how there were many people named Judas before this story, but not too many after it?

While we do see many stories of God forgiving people of their mistakes in the Bible, this doesn’t seem to be one of them. The reason? Judas doesn’t seem to care about spiritual things or about being a true follower of Jesus. He seems more interested in being on the winning side. I am sure that he had high hopes for Jesus during the beginning of His ministry. Perhaps Judas thought that Jesus would be successful in overthrowing the local authorities and eventually, maybe even the Romans. But at the time of the betrayal, it was pretty clear to everyone that this would not be Jesus’ destiny. The Romans were probably there to stay for quite a bit longer (history shows us it would be at least three more centuries before Rome’s time was over).

But what Judas did not realize, was that Jesus had come to save the world in a much better way. Jesus’ destiny was on a cross, and three days later, He would rise from the dead (something no one really expected at the time). Jesus became the fulfillment of the promise to Abraham… the Messiah. He was the descendant of Abraham from whom the whole world would be blessed. He literally saved the world and Judas’ decision to betray Him was one of the worst decisions ever made.

1) Morgan and Carol don’t want to fight Negan. When they choose not to fight, are they actually choosing a side? Explain.

2) Michonne is shown that Negan’s people greatly outnumber her people. She is now the only one in Alexandria who knows to what degree they are outnumbered, but she still wants to fight Negan. What does this say about Michonne?

3) Why do you think Daryl kills Fat Joey without mercy? Is this a wise decision? Is this just?

4) Michonne presumably kills the woman in the car. Both women seem to know that this is what needs to happen. Why does Michonne do it? Why does the woman tell Michonne that she should kill her?

5) Why do you think that Negan doesn’t kill Rosita after she tries to kill him? Was this a wise decision on his part? Why or why not?

6) Why do you think that Spencer goes to Negan to tell him that he should lead Alexandria? Even if Negan didn’t kill him, was it a wise thing to do? Why or why not?

7) Have you ever chosen the wrong side? What happened? Would you make that same choice again?

8) Judas pretended to be more spiritual than he was. How do you think that makes God feel?

9) How easy is it to undo a bad choice? Are there bad choices you can make that can’t be undone? Why or why not?

10) What are some of the things you can do to help make better decisions? Does your perspective matter while you make choices?