Who is it CONTEST 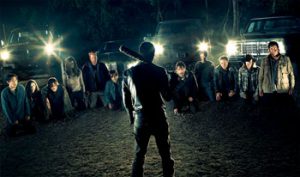 The Walking Dead Season Premiere is less than a week away, and that means we finally get to discover who the evil Negan killed. Many of you love this show because of its amazing discussions about morality, leadership, and good vs. evil. Season 6 left us all hanging, wondering if our group of survivors did the right thing, and which one of them was brutally murdered by the notorious Negan.

So we’re going to have a little contest for our The Gospel According to The Walking Dead blog subscribers in the comments below to see how many of you can guess who died. And you are going to love the prizes… because literally EVERYONE who guesses correctly wins!

But first… our favorite The Gospel According to the Walking Dead author Thom McKee Jr. shares his two cents about cliffhangers and bold predictions…

Cliffhangers and Bold Predictions on the Walking Dead!
by Thomas McKee Jr.

Let me just say this first… I love cliffhangers. I know that not everyone agrees with me here, but I just love being forced to wait to find out what happens to my favorite characters on a show or a movie. The first cliffhanger that I vividly remember happened just before the summer of 1980. Yes, that was the summer of “Who shot J.R.” on the T.V. show Dallas, but that is not the cliffhanger I have implanted into my “Memory Hall of Fame.” My life was forever changed at the Century Theatres on Arden Way in Sacramento when I found out that Darth Vader was Luke’s father. And if that wasn’t enough of a shock, Vader proceeded to cut off Luke’s hand and leave him for dead hanging from a weather vane beneath Cloud City. To make matters worse, Han Solo was frozen in carbonite and loaded onto Slave One to be flown back to Tatooine. When I walked out of that theater, I knew that I was going to have to wait three years to find out what happened to these beloved characters… and I loved it! This meant that for three years I was going to get to guess, opine and argue about the fate of our heroes with all of my friends and family.

Those were the days! But no matter how much I debated with my friends about it, I would never be able to predict that the resolution of the next film would be a battle between Stormtroopers and a bunch of teddy bears.

This was where I learned a valuable lesson about being a geek – the real fun really comes in the talking about films, comics and television – almost more (at times) than actually watching the resolution.

In the age of binge watching and Internet leaks, cliffhangers have become almost extinct. Yes, they still do exist, but they are so much work for filmmakers because of the Internet. George Lucas himself would be one of the first pioneers in spoiler reduction by hiring actual CIA personnel to help him effectively hide the secrets of the prequels in the late 1990s. But with “on set” spies and script leaks, the Internet has made it almost impossible to keep a cliffhanger from being spoiled.

That is why this cliffhanger at the end of season 6 of The Walking Dead is so amazing. It actually has almost brought me back to some of the same feelings I had during that summer of 1980. And the showrunners at TWD have done an amazing job of keeping this one under wraps.

At the end of the last episode of season six, we all cringed as we watched the evil Negan kill one of our heroes… without letting us know which one of them was dead. All we know is that one of our main characters is gone, but we just don’t know which one. And this has become one of the greatest cliffhangers of our day.

Scott Gimple, executive producer of TWD, has taken extreme measures to try and hide the answer to this question. I understand that he has even hired doubles of the missing actors from season seven just to throw off internet spies. I also understand that there is a threat of being fired looming over anyone who leaks the information. If an actor does it, they will certainly be the next character to be killed off of the show. Even crew members have been threatened with the age old Hollywood trope, “If you leak this you will never work in this town again.”

But, I have still tried my best to not read anything on the internet this summer that has anything “spoilerish” about it. I have also spent a lot of time discussing this with my friends, which made for a really fun summer. The great part is that we are nearing the end of our bittersweet wait, and we will finally will find out who was killed by the evil Negan next Sunday night (October 23rd). Any way you look at it, it is going to be a must-watch-television night, and I am very excited about finding out what happens next.

Here at The Gospel According to The Walking Dead, we only have one more week to discuss our theories as to what is going to happen. And we want to hear from you!

Who do you think is going to meet their untimely end? What are your theories as to what is going to happen?

So who is it? We want to hear from you in the comments below.

On Sunday October 23rd, Thom and I will post our predictions when the contest is closed (we wouldn’t want to sway anyone with our remarkable insights and almost prophetic analyses of The Walking Dead!) Then, all of America will be watching the show on Sunday night, and Thom’s episode discussion will post late Monday as usual.

I am looking forward to reading all of your theories this week. Good luck predicting one of the greatest cliffhangers of our day!

CONTEST RESULTS: Congratulations to Tracie Smith, who not only was the first person to guess over all, but the first Abraham guess! You win the grand prize.

And to the rest of you who guessed Abraham as your one guess- each and every one of you won a copy of The Zombie Apocalypse Survival Guide for Teenagers. I’ll contact each one of you this week to get your mailing addresses and mail you those prizes! Thanks for participating!