Blame It (On The Alcohol) 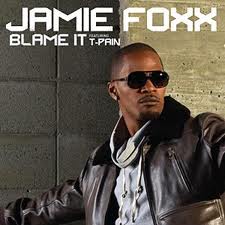 Main Point: If we lose control to alcohol, there could be some very serious consequences to face. In the aftermath, we may want to “blame it on the alcohol” but really, we are to blame.

The Music Video: Blame It (On The Alcohol)
Jamie Foxx is a very talented musician and actor, which makes this completely un-subliminal song of his all the more disappointing. “Blame It” was released in early 2009 and rocketed to #2 on Billboard’s Hot 100. There were many reasons for the song’s popularity: it was catchy, the music video featured cameos by Jake Gyllenhaal, Ron Howard, Forest Whitaker, and Samuel L. Jackson, and many more, plus Foxx was joined by rapper T Pain.

But sadly, many young people learn an important lesson way too late: when alcohol gets us in trouble, we can’t put the consequences back in the bottle. We have to bear the responsibilities of our actions…sober or not.

WARNING: We encourage you as youth leaders and/or parents to use discretion with your decision to show these music videos to kids. Yes, let’s be honest, most of them have seen these videos. But for those who haven’t, do you want to be the one who showed them this? Or more importantly, do these kids’ parents want you showing them this? Consider just using the lyrics of the song and not using the video.

The song can be found on YouTube here: http://www.youtube.com/watch?v=rfjtpp90lu8

She said, she usually don’t
But I know that she front
‘Cause shawty know what she wan’t
She don’t wanna to seem like she’s easy
I ain’t saying what you won’t do
But you know what we’re probably gon’ do
What you been feenin’ deep inside
Let it out now, girl what you drinkin’, gon’ let it sink in
Here for a weekend, thinkin’, we can
See where we could be if we press fast forward
Just one more round and you’re down I’d know it
Fill another cup up, feelin’ on your butt what
You don’t even care now, I was unaware
How fine you was before
My buzz set in, my buzz set in

Ooh see, she spilled some drink on me
And now I’m knowin’ she tipsy
She put her body on me
And she keeps staring me right in my eyes
No tellin’ what I’m gon’ do
Baby, I would rather show you
What you been missin’ in your life when I get inside
Girl, what you drinkin’? Don’t let it sink in
Here for the weekend, thinkin’, we can
See where we could be if we press fast forward
Just one more round if your down, I’m fallin’
Fill another cup up, feelin’ on your butt what
You don’t even care now, I was unaware
How fine you was before
My buzz set in, my buzz set in

Girl, I know you feel good
Just like you look, couple more shots
You open up like a book, I ain’t trippin ’cause I’ma read yaShawty,
I ain’t trippin’, I jus’ wanna please ya
I’ma take a shot of Nuvo, shawty, then you know
It’s going down, we can go kick it like Judo
You know what I mean Shawty got drunk, thought it all was a dream
So I made her say I,
Now she got her hand on my leg
Got my seats all wet in my ride
All over my ride
She look me dead in the eye
Then my pants got bigga
She already knew what to figga
Had her lookin’ at her boyfriend like, “F**k dat nigga”

Now to the ballas poppin’ bottles
With they henny in they cups screamin’
Money ain’t a thing, if it ain’t throwin’ it up in the sky
Hold your drinks up high
And to my independent ballas
Who can buy they own bottles
If you lookin’ like a model
When them broke fellas holla, tell ’em, bye
Hold your drinks up high
You can blame it on the goose, gotcha feeling loose


Say the following:
Let me read you a few lines from a recent study performed by The Center for Disease Control and Prevention.

Binge drinking is a dangerous behavior that can lead to tragic circumstances. It’s not often recognized as a women’s health problem but nearly 14 million U.S. women binge drink about three times a month, and consume an average of six drinks per binge.

In addition, the report finds that about 1 in 5 high school girls report binge drinking. Binge drinking is defined as consuming four or more drinks on an occasion for women and girls. Drinking too much, including binge drinking, causes about 23,000 deaths among women and girls in the United States each year.
Also, The National Institute on Alcohol Abuse and Alcoholism claims that “25% of American women have experienced sexual assault, including rape. Approximately one-half of those cases involve alcohol consumption by the perpetrator, victim, or both. Alcohol contributes to sexual assault through multiple pathways, often exacerbating existing risk factors.

Be very careful, then, how you live– not as unwise but as wise, 16 making the most of every opportunity, because the days are evil. 17 Therefore do not be foolish, but understand what the Lord’s will is. 18 Do not get drunk on wine, which leads to debauchery. Instead, be filled with the Spirit.


Wrap Up:
Alcohol. It seems like it’s everywhere. It’s on billboards, TV commercials, and the pages of magazines. It’s celebrated in movies and some people’s lives. It’s even tucked away inside many of our family’s fridges. Alcohol will be a temptation that everyone has to deal with.

Jamie Foxx basically says that if we make mistakes with booze, we can just blame it on the alcohol. In other words, if we wreck our lives, or our relationships, or our health, we can just point a guilty finger at alcohol. But even though it made for a really popular and catchy song, his advice is horrible. We can’t get off the hook when we make foolish mistakes by blaming the alcohol. It’s utterly ridiculous! Murderers can’t blame alcohol, neither can rapists (as we’ve seen in the Steubenville, OH rape case of 2013).

That’s why God’s Word tells us to avoid being drunk on alcohol. In His infinite wisdom, God knew that there would be consequences for losing control to alcohol. He wanted us to avoid that pain, so He tells us to be filled with His Spirit, not on alcohol. But the passage that we read from Ephesians isn’t the only place where God talks about the dangers of alcohol. Let me share two other quick passages with you from the Book of Proverbs.

Proverbs 20:1 Wine is a mocker and beer a brawler; whoever is led astray by them is not wise.

Proverbs 21:17 He who loves pleasure will become poor; whoever loves wine and oil will never be rich.Again, God seems to be painting us a picture about the consequences associated with losing control on alcohol. He says we will be led astray and that we will be mocked and that we will be poor if we abandon our self-control to alcohol. I don’t know about you, but I don’t want any of those things to happen to me.

I know that we live in a world where it’s highly popular to blame others for our mistakes and shortcomings, but that’s a weak and flawed way of dealing with our failures. We can’t blame our parents or our bosses or our little sister if we get drunk; neither can we blame the alcohol if we get drunk.

The best plan is to avoid it altogether…and then you won’t need anyone or anything to blame in the first place.