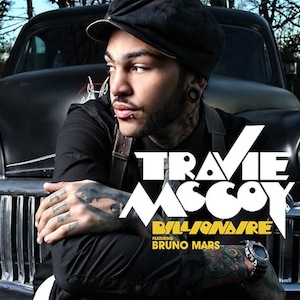 Main Point of Discussion: The love of money is bound to get us into trouble.

In June 2010, McCoy released his first solo album, Lazarus, and “Billionaire” is its first single. Bruno Mars is a singer-songwriter and producer who cowrote “Billionaire” with McCoy and performs its main vocals, leaving the rapping to McCoy.

Keep in mind that the official version of this song includes a few profanities so we recommend you use one of the clean versions (they are usually just homemade videos with lyrics across the screen). There are a few that can be found on YouTube like this one.

(Here’s one of the uncensored versions of the official video posted on YouTube.)

It may also help to acknowledge with your students that there are edited-out profanities in the lyrics, but that the overall message of the song is what’s important.

Introducing the Song:
We’re going to take a deeper look at the worldview behind the big pop song, “Billionaire,” a tune most of you are probably familiar with. Let’s check it out.

[Bruno Mars verse]
I wanna be a billionaire so frickin’ bad
Buy all of the things I never had
Uh, I wanna be on the cover of Forbes magazine
Smiling next to Oprah and the queen

[Chorus]
Oh every time I close my eyes
I see my name in shining lights
A different city every night
Oh I, I swear
The world better prepare
For when I’m a billionaire

[Travis “Travie” McCoy]
Yeah I would have a show like Oprah
I would be the host of everyday Christmas
Give Travie a wish list
I’d probably pull an Angelina and Brad Pitt
And adopt a bunch of babies that ain’t never had s–t
Give away a few Mercedes like, “Here lady, have this!”
And last but not least grant somebody their last wish
It’s been a couple months since I been single so
You can call me Travie Claus minus the ho-ho
Get it I’d probably visit where Katrina hit
And d–n sure do a lot more than FEMA did
Yeah can’t forget about me stupid
Everywhere I go I’ma have my own theme music

[Travis “Travie” McCoy]
I’ll be playing basketball with the president
Dunkin’ on his delegates
Then I’ll compliment him on his political etiquette
Toss a couple milli in the air just for the heck of it
But keep the fives, twenties, tens, and bens completely separate
And yeah I’ll be in a whole new tax bracket
We in recession but let me take a crack at it
I’ll probably take whatever’s left and just split it up
So everybody that I love can have a couple bucks
And not a single tummy around me would know what hungry was
Eating good sleeping soundly
I know we all got a similar dream
Go in your pocket pull out your wallet
And put it in the air and sing

I wanna be a billionaire so frickin’ bad

Transitional Statement:
“Billionaire” is a catchy single that a whole lot of people love—but is that because of the smooth singing, pretty melodies, and clever rapping? Or could the song’s message, especially in these hard economic times, be striking a chord with listeners? The Bible definitely has a few things to say about some of the lyrics by Travie McCoy and Bruno Mars.


1 Timothy 6:9-12 (NIV)
9People who want to get rich fall into temptation and a trap and into many foolish and harmful desires that plunge men into ruin and destruction. 10For the love of money is a root of all kinds of evil. Some people, eager for money, have wandered from the faith and pierced themselves with many griefs. 11But you, man of God, flee from all this, and pursue righteousness, godliness, faith, love, endurance and gentleness. 12Fight the good fight of the faith. Take hold of the eternal life to which you were called when you made your good confession in the presence of many witnesses.


Wrap Up:
It’s common for people to say that “money makes the world go ’round”; but if you’re a Christian, you know that God alone is the one who does that trick! All God has to say is, “Game over,” and our lives and concerns and pursuits and worries and battles and all the petty things we fill our days with would end instantly. The world keeps spinning on its axis, the sun keeps shining, the rain keeps falling, we keep breathing…because God lets it happen.

No doubt money has its place in our lives. It’s important. Having more of it often makes life easier and more enjoyable. But the Bible says (and I think we’ve seen enough examples pulled right from our own headlines) that the love of money often leads to bad things. It’s about time that we put the pursuit and use of money in its proper place and viewed it with a proper perspective. That’s not easy to do with such a bad economy—a lot of people hear a song like “Billionaire” and start dreaming of what they’d do with that much money. How all their problems would immediately end. But God knows better…and can see down the road what happens to a lot of people who not only pursue riches but actually attain them. New worries come. People get jealous. Then before you know it, you don’t know who loves you for you alone and who just wants a piece of your bank account. And that’s only the beginning: What about who you trust? What about who you depend on? Then all of a sudden you’re depending on money to meet your needs instead of God.

There’s nothing wrong with planning ahead and dreaming of good, practical things you can do with money. But when it becomes an obsession, that’s when problems begin. This week I want to challenge each of you to think about this passage that Paul wrote to Timothy every time you hear someone talk about money or the economy. Think especially about the last verses:

“But you, man of God, flee from all this, and pursue righteousness, godliness, faith, love, endurance and gentleness. Fight the good fight of the faith. Take hold of the eternal life to which you were called when you made your good confession in the presence of many witnesses.”