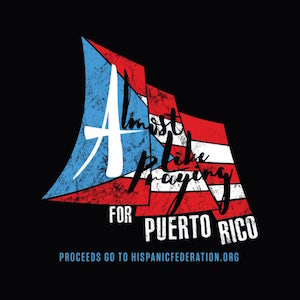 Main Point: It’s far too easy for us to talk about prayer, but God has invited us to come to Him and ask for the things we need. He invites us to talk to Him personally, and as we know Him we can trust that He hears us when we pray.

Lin-Manuel Miranda is best known for creating and starring in the Broadway blockbuster Hamilton. Miranda is a native New Yorker, but is mostly of Puerto Rican descent, having spent a month every year of his youth at his grandparent’s home in Vega Alta. Wanting to do something about the devastation Puerto Rico faces from Hurricane Maria, Miranda collaborated with artists such as Jennifer Lopez, Gloria Estefan, Mark Anthony, and Despacito artist Luis Fonsi. Lin-Manuel started working on this song just two days after Maria’s landfall, and his draw to theater provided inspiration. In the titular hook, Miranda borrows the line it’s almost like praying from West Side Story’s song “Maria” in an effort to reclaim the name Maria from the devastating hurricane.

Transitional Statement:
It seems that in times of hardship, prayer is often brought up as a response. The idea that something is “almost like praying” creates an interesting conversation. Do we take advantage of the opportunity God has given us to interact with him personally in prayer? What would our lives look like if we seized this opportunity with boldness, and believed that prayer changes things?

Let’s talk about this a bit and then look and see what God’s Word says on the subject.

Ask, and it will be given to you; seek, and you will find; knock, and it will be opened to you. For everyone who asks receives, and the one who seeks finds, and to the one who knocks it will be opened. 9 Or which one of you, if his son asks him for bread, will give him a stone? Or if he asks for a fish, will give him a serpent? If you then, who are evil, know how to give good gifts to your children, how much more will your Father who is in heaven give good things to those who ask him!

Wrap Up:
During this time, we listened to an upbeat new song by Hamilton creator Lin-Manuel Miranda. We listened to several artists sing and rap the various cities in Puerto Rico with the idea that saying these names is “almost like praying.”

Manuel has a sincere passion to help the people of Puerto Rico, and the proceeds of this song went toward that end. However, it seems often in the face of tragedy, you and I often do not know how to respond. In these situations, we talk about prayer, or even say to others that we are praying for them, but do we take the time to pray? Would you say you are guilty of this?

If we believe prayer makes a difference, if we believe Jesus’ invitation for us to ask is because He wants to do good things when we ask, what truly could be more important than taking the time to pray?

Let’s have several of us close out in prayer, asking God to help us be people to have the faith to go to Him in prayer no matter what our circumstances are. Let’s ask God to speak to us when we pray, telling us what we can do, but also asking Him to help us trust Him no matter how He chooses to respond when we pray.