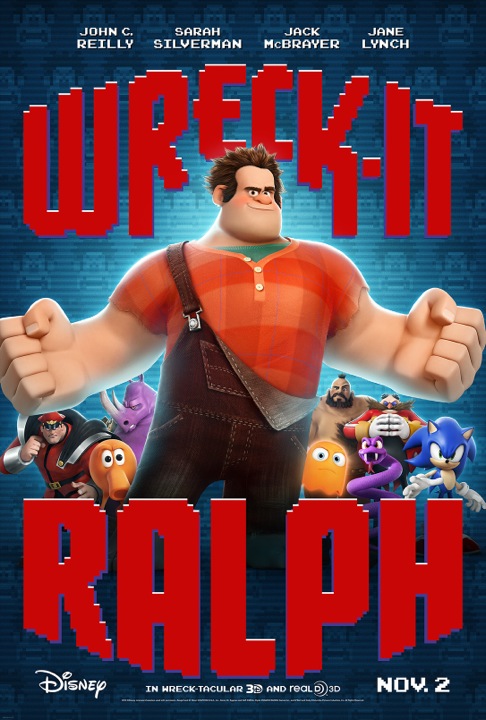 Main Point: Even if we’ve always been sinners, we don’t have to remain in our sin any longer. Jesus can totally change us!

The Movie Clip: I Don’t Want to Be the Bad Guy Anymore

Wreck It Ralph was the biggest animated film of 2012. It followed the “bad guy” character (Ralph) of a fictitious video game on his pursuit to becoming a good guy. Ralph knew that he was designed to be the bad guy, but that particular hard-wiring was destroying him on the inside. He didn’t want to be a bad guy anymore, and he was willing to go to great lengths to become a good guy.

In addition to having a terrific soundtrack, the movie employed several big names as on-screen voices. Ralph was voiced over by John C. Reilly; Vanellope was voiced by Sarah Silverman; Felix’s voice was provided by Jack McBrayer (of 30 Rock); and Calhoun was voiced by Jane Lynch (Glee).

The movie was rated PG by the MPAA.

Introducing the Clip:
Many of us saw Wreck It Ralph in theaters late last year, but I want to show you a clip from the movie to launch our discussion. This clip doesn’t need much of an introduction because it’s the opening scene of the movie, and Ralph gives all the introduction, himself. Take a listen to what he has to say about being a “bad guy” and his tremendous desire to be a “good guy.” It’s a big struggle for him, and he’s willing to do just about anything to change his situation.

Note: This film is available for rent and purchase; pick up a copy of this film and show the first 6 minutes.

(This clip is rather long – over 5 minutes – so only the key dialogue will focused on.)

The movie opens with the graphic of a video game, Fix It Felix, being played out. Wreck It Ralph is narrating the clip and introduces himself as the bad guy of the video game and tells us that his video game has been going strong for 30 years. Ralph has all these wonderful things to say about Felix and the other Nicelanders, but regrets that he has to be the bad guy and live in a dump while everyone else gets to be together inside. The problem is more than he can bear so Wreck It Ralph tells his Bad Guys Anonymous club members that he is a bad guy who no longer wants to be a bad guy.

Zangief: I am Zangief. I am bad guy.

Zangief: I relate to you Ralph. When I hit bottom, I was crushing men’s skulls like sparrow egg between my thighs. And I think, Why do you have to be so bad, Zangief? Why can’t you be more like good guy? Then I have moment of clarity. Zangief is good guy who crush man’s skull like sparrow’s egg between thigh, and I say, Zangief, you are bad guy, but this does not mean you are bad guy. (The crowd applauds his thoughts.)

Ralph: Right. I’m sorry. You lost me there.

Zombie: Zangief say labels not make you happy. Good. Bad. Uuuggghhhh. You must love you.

(Later in the same conversation:)

Ralph: Here’s the thing. I don’t wanna be the bad guy anymore. (All the bad guys freak out!)

Bad Guy: You can’t mess with the program Ralph.

Bad Guy: You’re not going Turbo, are you?

Ghost: Ralph, Ralph, we get it. But we can’t change who we are. The sooner you accept that, the better off you, and your game, will be.

Zangief: Hey, one game at a time, Ralph.

Ghost: Now let’s close out with the bad guy affirmation.

Transitional Statement:
Have you ever felt like Ralph? Have you ever thought there was no hope for you to change? Have you ever tried to be better, but then failed? If so, did that make you feel trapped like Wreck It Ralph? That’s a scary place to be, whether you’re a game character or a human being. But the good news is, it’s possible for people to change. In fact, even if we’ve always been sinners, we don’t have to remain in our sin any longer. Jesus can totally change us! Let’s spend the next few minutes taking a look at a real-life Wreck It Ralph found in the Bible to see how he had his life changed.

NOTE: Say this.
Before we read this passage, you MUST understand what a tax collector was in Jesus’ day. A tax collector was the ultimate “bad guy” if you asked somebody who lived during Jesus’ era. These guys were Jews who took money from their fellow Jews to give to the rotten Romans (who had beaten the Jews in a recent war). But not only did they conduct this “treasonous” business, tax collectors ALSO took so much money from their neighbors that they could line their pockets with the excess. Talk about scum bags. To make matters worse, there were positions called “chief tax collectors” and those guys were at the top of the tax collecting food chain! They had robbed their neighbors for so long and so effectively, that they had other tax collectors go and do their dirty work for them; they just sat in their office and collected money from their tax collector henchmen. That was what Zacchaeus was.

Jesus entered Jericho and was passing through. 2 A man was there by the name of Zacchaeus; he was a chief tax collector and was wealthy. 3 He wanted to see who Jesus was, but being a short man he could not, because of the crowd. 4 So he ran ahead and climbed a sycamore-fig tree to see him, since Jesus was coming that way. 5 When Jesus reached the spot, he looked up and said to him, “Zacchaeus, come down immediately. I must stay at your house today.” 6 So he came down at once and welcomed him gladly. 7 All the people saw this and began to mutter, “He has gone to be the guest of a ‘sinner.'” 8 But Zacchaeus stood up and said to the Lord, “Look, Lord! Here and now I give half of my possessions to the poor, and if I have cheated anybody out of anything, I will pay back four times the amount.” 9 Jesus said to him, “Today salvation has come to this house, because this man, too, is a son of Abraham. 10 For the Son of Man came to seek and to save what was lost.”

Wrap Up:
Wreck It Ralph had a problem. He was a bad guy who wanted to be a good guy. He had a bad reputation with those around him, and he wanted that fixed. Zacchaeus was in a similar boat. He had a bad reputation because he was a sinner and a thief. Both of these guys were what we would call “bad guys.” But in the end of both of their stories, they were “good guys.”

Ralph goes on a quest to prove to others that he’s a good guy. Zacchaeus goes to Jesus.

I’d suggest you doing the exact same thing as Zacchaeus did. If you’ve ever been a “bad guy” or you’ve ever needed forgiveness for something you’ve done or said or you’ve ever tried to be better and failed, then you know what it felt like to be Zacchaeus. But based on the story we read during our time together, we learned that Zacchaeus was changed by Jesus, not by some self-help or 12 step program.

The same will be true for you. You can’t change the fact that you’re a sinner and that you intentionally choose to break God’s heart. You can’t change the consequences for your actions or words. All you can do is choose Jesus, and if you do, He will change your life completely. Even if you’re a sinner separated from God, lost apart from Him in your sin, Jesus can make you totally new and different. He can change you like nothing else and no one else!

You won’t just be a “good guy” like Ralph was trying to be; you will be totally righteous through Jesus. All you need to do is put your trust and hope in Jesus. (Leaders – You should take a moment to explain Jesus’ life and death on the cross, as well as His resurrection from the dead.) Nothing else is required. Jesus will show you how to live, and it’s up to you to obey Him from that moment on.

I recommend this to everyone in this room. But if you’re here and you’re facing something much bigger than video game bad guys like Ralph or upset neighbors like Zacchaeus, then consider hanging back after everyone else leaves. We have lots of leaders who would love to talk more with you about Jesus, pray with you, and even offer you some practical help.

Just remember this: no matter how you walked in here, you can leave totally new and different. Let’s pray.