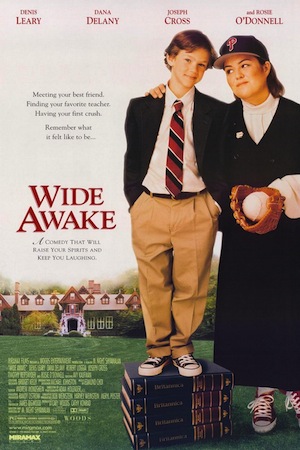 Main Point of Discussion: We must learn to show love to people… even the ones we don't like.

The Movie Clip: Compassion for… Freddie?

Before Lady in the Water, Signs, or even The Sixth Sense, M. Night Shyamalan's first major film, Wide Awake, was about a kid in search of God. The film, full of numerous discussion provokers, introduces young actor Joseph Cross as Joshua A. Beal. Josh recently lost his grandfather and seeks out God to make sure that “Grandpa made it up there okay.” In Josh's quest for God, he finds more questions and more answers than he was looking for.

Introducing the Clip:
Today we're going to be talking about certain people in your lives. We've all got these particular people. They are at your school or maybe in your home, or perhaps even in this room. We're talking about the people we just plain don't like. Everybody's got them. But before we go into our discussion, we're going to watch a video clip from the movie Wide Awake. Wide Awake is about a kid named Josh that attends a private Catholic school. Throughout the film we have seen young Josh get picked on by a bully named Freddie.

In scene I’m going to show you, kids are waiting in the cafeteria to be picked up from school. One of the nuns (played by Rosie O'Donnell) calls various kids, finally getting to Freddie, the bully of the school. In a prior scene, Freddie just had a meeting with the principal and found out that his parents can't afford the school anymore. This will be Freddie's last day of school. Josh overheard this conversation in the principal's office and actually feels sorry for Freddie. But he can't figure out why he cares for a kid that has devoted his life to picking on others. This is the moment that Freddie is going to be leaving the school for good. Watch how Josh responds to this new situation.

Freddie doesn't get up. He just sits at the cafeteria table with his head hung low. All the kids watch as Sister Terry walks over to him.

Josh's Voice Over: Freddy Waltman has picked on me since I was in 3rd grade. He pushed me in a locker, put cherry Jell-O in my sneakers and told everyone when I split my pants in social studies. What is wrong with me? Today should be the happiest day of my life.

Freddie is led out to his parents' car by Sister Terry. Josh, responding to his own conviction, leaps from his seat and runs out to Freddie's car, now slowly pulling away.

The minivans puts on its brakes and Josh runs up to it and knocks on the window next to where Freddie is sitting in the minivan. Freddie looks puzzled for a moment, but then opens the minivan door. Josh pauses for a moment, then extends his hand to shake Freddie's hand.

They shake hands
END CLIP WHEN THEY SHAKE HANDS.

Transitional Statement:
It was a little surprising to see how Josh responded to Freddie, isn't it? Right now we're going to discuss how we're supposed to deal with our “enemies.” It's a difficult thing when you're trying to deal with someone you don't like.

Matthew 5:43-47 (NLT)
“You have heard that the law of Moses says, 'Love your neighbor' and hate your enemy. [44] But I say, love your enemies! Pray for those who persecute you! [45] In that way, you will be acting as true children of your Father in heaven. For he gives his sunlight to both the evil and the good, and he sends rain on the just and on the unjust, too. [46] If you love only those who love you, what good is that? Even corrupt tax collectors do that much. [47] If you are kind only to your friends, how are you different from anyone else? Even pagans do that.”


Wrap Up:
Isn't it interesting how Josh's attitude toward Freddie changed when he realized he was going to leave the school? This new insight gave Josh a peek into Freddie’s tough situation. Josh felt sorry for Freddie when he took the time to step into his shoes for a moment. Sometimes compassion starts with the question: “What is it like to be ________ ?” (Place the name of your enemy in the blank.) Compassion starts with putting ourselves in their shoes and seeking to understand them. We just talked about this in our small groups. Take a moment to think about the action that you talked about doing this week. Pray and ask God to give you compassion for that person today.