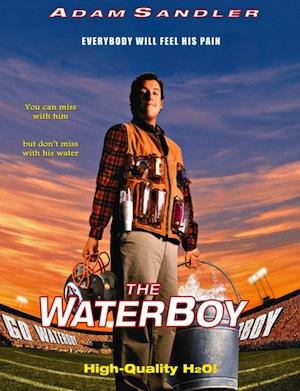 Main Point of Discussion: Can we redirect anger into something good?

In this movie the weakling water boy becomes the star of the football team, finds popularity, and gets the girl in the end, all as a result of tapping into the anger within him and living it out on and off the field. It is a comedy but has a bunch of questionable things such as language that you should be aware of, but the clip we're using is great for talking about anger.

Introducing the Clip:
Today we are going to talk about anger. There are a lot of examples out there that have to do with anger, but one in particular really captures the heart behind anger and allows us to see the good and bad side of anger. Let's watch this clip from The Waterboy.

BEGIN CLIP AT about 20 minutes into the film. Bobby (the water boy) comes on the field dressed to play for the first time. Start the clip right after the coach sends the special teams to run laps.

STOP at about 23 minutes and 52 seconds, after Bobby agrees to tackle for Coach like that every game.

Transitional Statement:
Some of us might wonder about anger. Is anger in and of itself “bad”? As you can see, Bobby can react pretty bad when he’s angered. I’m sure some of us can relate to that. But once Bobby redirected his anger toward something good, his anger wasn’t a bad thing.

Divide into Small Groups:
Let’s go ahead and split up into our discussion groups and examine anger a little closer, and then afterward we’ll come back together for a final word.

John 2:13-16 (NLT)
[13]It was nearly time for the annual Jewish Passover celebration, so Jesus went to Jerusalem. [14] In the Temple area he saw merchants selling cattle, sheep, and doves for sacrifices; he also saw dealers at tables exchanging foreign money. [15] Jesus made a whip from some ropes and chased them all out of the Temple. He drove out the sheep and cattle, scattered the money changers' coins over the floor, and turned over their tables. [16] Then, going over to the people who sold doves, he told them, “Get these things out of here. Stop turning my Father's house into a marketplace!”

Nehemiah 5:6-7 (NLT)
[6]When I heard their complaints, I was very angry. [7]After thinking it over, I spoke out against these nobles and officials. I told them, “You are hurting your own relatives by charging interest when they borrow money!” Then I called a public meeting to deal with the problem.


Wrap Up:
(This is a good place to share a personal story where you turned/redirected your anger into something good–or even a situation where you just blew up and now see a simple way you could have redirected it.)

We can learn from Nehemiah. When we face frustrating situations, we can: 1.) Admit that we’re angry; 2.) Stop and think before we react; 3.) Communicate a well thought-out solution.

CLICK HERE FOR A LINK TO JONATHAN’S SERMON/TALK ON THIS PASSAGE, “Hulk Vs. Nehemiah!”