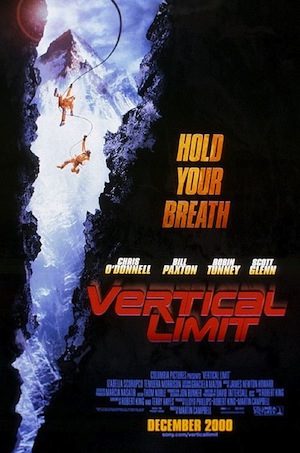 (Colombia Pictures, 2000)
Main Point: The sacrifice of our Heavenly Father ensures that His children have life.

The Movie Clip: “Cut the Rope!”
Vertical Limit tells the story of Peter (Chris O’Donnell) who ventures to the top of K2 to save the life of his estranged sister, Annie (Robin Tunney), after her team is trapped by a deadly avalanche. This wasn’t the first time Peter and Annie had been in life-threatening situations on the sides of mountains; they grew up climbing mountains with their father.

At the very beginning of the film, a tragedy befalls the adventurous family, and each of them are required to make life-and-death decisions in a matter of seconds. This intense scene is the one used for our discussion.

Introducing the Clip:
OK, hang onto your seats, because I want to show you the gripping and stirring scene that opens the action-packed movie entitled Vertical Limit. Peter, Annie, and their dad always enjoyed rock climbing together; it was their family “quality time.” In this clip, we’re gonna see what happened on the side of a mountain one fateful day when a tragic accident forced each of them to make life-and-death decisions about one another.

Note: This scene has two swear words in it, so make sure you preview it BEFORE showing it to your group to ensure it conforms with the standards of acceptability for your group. Also, it is an intense and graphic scene, so check it for age appropriateness, as well.

Scene script:
BEGIN CLIP AT 0 hours 0 minutes and 0 seconds (yep, it’s the opening of the movie).

The scene opens with an eagle flying majestically over the desert. Soon, a group of rock climbers come into view on the side of a mountain. We discover that they are a family, and are quizzing each other about music as they venture up the rock face. In the midst of their conversation, a climber above them has an accident that affects everyone below, including this family. Below is the dialogue critical for our discussion:


Dad: Peter, I want you to get your knife.

Dad: Just do as I say….(Their weight causes them to fall a little more, with the cam jerking down and loosening a little more in the cliff.)

Dad: Get it! You don’t have much time here. (Peter pulls out his knife.) You have to do something for me, Peter…cut me lose. There’s too much weight here; one cam’s never gonna hold us.

Dad: You understand what I’m saying? You have to cut me lose. If you don’t do this, I’m gonna pull everybody down and everybody’s gonna die.

Dad: Shut up, Annie! It’s one dead or three. Peter; you understand what I’m saying…just think about it!

Annie: Don’t make him do this!

Dad: You’re gonna kill your sister. Annie’s gonna die if you don’t do this, now cut the rope!

Dad: Cut the—any second now that cam is gonna come out of the wall and you are gonna die, Annie, is that what you want? (to Peter) You’re gonna kill your sister; now cut the damn rope! It doesn’t matter about me; just cut it! We’re running out of time here!

Annie: Don’t do it Peter!

Transitional Statement:
In this clip, we saw a father give his life to save the lives of his children. Because he was willing to sacrifice himself, they were able to live. The sacrifice depicted in this scene is a fantastic reminder of the sacrifice our Heavenly Father endured for us so we could have abundant and eternal life.

1 John 3:1-3 (NLT)
1 How great is the love the Father has lavished on us, that we should be called children of God! And that is what we are! The reason the world does not know us is that it did not know him. 2 Dear friends, now we are children of God, and what we will be has not yet been made known. But we know that when he appears, we shall be like him, for we shall see him as he is. 3 Everyone who has this hope in him purifies himself, just as he is pure.

Leader Say This:
Like the dad in the movie clip we just watched, our Heavenly Father also made a huge sacrifice for those he calls His children…us. Let’s take a look at how this is possible as we read another passage from the Bible.

Ephesians 2:1-5 (NIV)
1 As for you, you were dead in your transgressions and sins, 2 in which you used to live when you followed the ways of this world and of the ruler of the kingdom of the air, the spirit who is now at work in those who are disobedient. 3 All of us also lived among them at one time, gratifying the cravings of our sinful nature and following its desires and thoughts. Like the rest, we were by nature objects of wrath. 4 But because of his great love for us, God, who is rich in mercy, 5 made us alive with Christ even when we were dead in transgressions—it is by grace you have been saved. 6 And God raised us up with Christ and seated us with him in the heavenly realms in Christ Jesus, 7 in order that in the coming ages he might show the incomparable riches of his grace, expressed in his kindness to us in Christ Jesus. 8 For it is by grace you have been saved, through faith—and this not from yourselves, it is the gift of God— 9not by works, so that no one can boast.


Wrap Up
Tonight, we watched a gruesome clip about a father who lost his life in a climbing accident trying to save the lives of his children. It’s clear from his course of action that he loved his kids. He would rather lose his own life than for them to lose their lives.

As tough as that was to watch, it gives us a pretty accurate glimpse of our Heavenly Father’s attitude toward you and me. Tonight, we read about the love our Heavenly Father has for us and how He wants to purify us and save us from sin and death.

But, like the father in the film, our Heavenly Father had to make a sacrifice for us to be saved. If you read the Bible at all, you will see that the sacrifice our Heavenly Father had to make was the crucifixion of His Son Jesus on a cross two thousand years ago. The Bible makes is crystal clear: Jesus died on the cross to pay the penalty for our sins.

But just because the sacrifice of Jesus has been made, and your price has been paid, does not mean that you are saved. You have to accept the Father’s sacrifice for you and act on it. Just a few moments ago, you were asked an important question: “If you knew that your Heavenly Father could save you from the things you mentioned in your small groups, would you take Him up on His offer?”

Think about that again. It’s a simple answer, yes or no, but it will change your life.

Your Heavenly Father has sacrificed His most precious and valuable for you to be saved and have life. Now is the time to accept that and act on it. If you want to do so now, just follow along in your heart as I pray this prayer asking for God to forgive us, save us, and lead us, for the rest of our lives.

Lead them through the Sinner’s Prayer and invite them to talk to an adult if they made that decision.