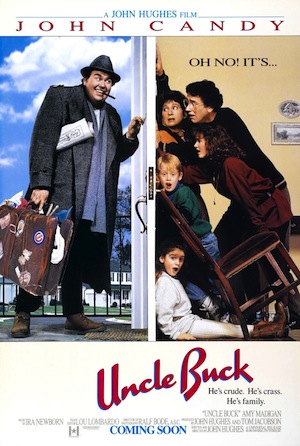 (Universal, 1989)
Main Point: When picking someone to date, it’s easy to choose a person who’s a bad influence. The best way to avoid that trouble is to seek out a person that is godly.

Movie Clip: Buck Meets Bug
Uncle Buck was a 1989 comedy starring John Candy as the lovable buffoon in the lead role. When a medical emergency strikes the family in the middle of the night, Uncle Buck is asked to house sit…with the kids. For the most part, things go well with the two younger kids. But everything is up in the air with the teenage daughter named Tia. The clip below centers on two of their confrontations from the same day.

Introducing the Clip:
Uncle Buck was released in theaters before ANY of you were born, but that doesn’t mean it wasn’t funny. The late John Candy starred in the movie as Uncle Buck, the hopelessly lost bachelor who must take care of his brother’s kids when a medical emergency strikes the family. Chaos ensues as Buck tries to manage two kids and one teenager. For the most part, Buck handles the role fine with the younger kids, but Tia, the teenage daughter gives him a hard time, as this clip shows. Take a look at what happens when Uncle Buck meets “Bug.”

(This is a long clip, so only the key dialogue will be supplied below. But here is a synopsis of the entire clip.)

The clip opens at Tia’s high school. As Uncle Buck drives his jalopy up to the school in the morning, all the cool kids are standing around outside before class starts. It thoroughly embarrasses Tia…and she lets Buck know it. After exchanging some harsh words, the scene changes back to the house.

There, Buck talks on the phone with his girlfriend. He upsets her when he turns down her offer to work for her. He excuses himself by stating he doesn’t know how long he will have to help his in-laws. Then, we see Buck sitting at home flipping through old photo albums. He realizes that his in-laws hide photos of him, which upsets him as he reflects on it.

Finally, we’re taken back to school later that afternoon. We see Tia and her boyfriend, Bug, sitting on the school steps, making out. Uncle Buck pulls up and the car backfires again. The two of them walk over to the jalopy.

Tia: (as she gets into the car) Call me.

Bug: (leaning into the car towards Buck) You ever hear of a tune up?

Uncle Buck: You ever hear of a ritual killing?

Buck: You gnaw on her face in public like that again and you’ll be one.

(Bug leans over to give Tia a kiss, but Buck squeals off in the car.)

Tia: Are you crazy?!

Tia: You could have taken his head off!

Buck: Yeah, but would he notice?

Tia: Can we get something straight?

Buck: The guy’s a predator and you’re his prey.

Tia: And how do you know?

Buck: When I was his age, I was the guy zooming the girls like you: pretty face, big chip on their shoulder.

Tia: I recommend that you stay out of my personal life.

Buck: Do your parents stay out of your personal life?

Buck: Have they met TwittleDink?

Tia: His name is Bug.

Transitional Statement:
While there were some funny scenes in that clip, there were also a few sad ones. It’s a little worrisome that Tia didn’t care what her uncle thought about her choice of boyfriends. All Uncle Buck was trying to do was share wisdom and experience with her by telling her the truth. She couldn’t care less. That’s sad. When we go looking for love, the best quality to look for in a person is godliness. Tia wasn’t doing that. She was looking for a thrill, and Uncle Buck knew that it would cost her. Let’s spend the next few minutes talking about how we can do that today.

But we also talked about ways to avoid picking the wrong person. All we need to do is look for someone who is godly. It’s impossible to overlook it when someone places God as their biggest priority. When a person is bent on being holy, it stands out. When a person wants to love another like God loves them, it’s unmistakable.

That’s the kind of person we need to be looking for.

Because if we don’t, we might end up facing some of the consequences that Samson faced. None of those things would have happened to Samson had he obeyed God and looked for a godly wife. But instead, he based all of his choices off lesser things, and wound up with a person whose last priority was serving God.

I hope that you’re now convinced that the most important quality to look for in a person is godliness. Everything else is less important than this. So as we close tonight, let me address the two kinds of people we have here: those in a relationship and those not in a relationship.

If you’re in a relationship and you’re thinking that the other person isn’t focused on being godly, then come and talk with us after we close in prayer. We want to help you with the next steps as you seek God’s will. But if you’re not in a relationship with someone right now, but would like to talk about exactly how to go about looking for godliness, I also invite you to come and talk with one of our leaders some more.

Don’t make the same mistake that Tia and Samson made. It’s not worth it.