Unbroken (Is There A Plan) 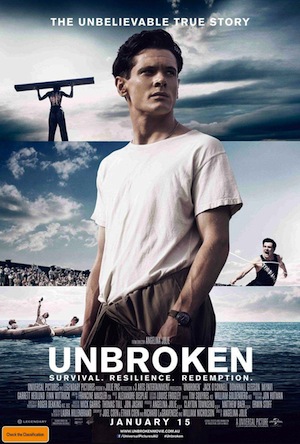 (Universal Pictures, 2014)
Main Point: God has a unique and perfect plan for every single one of our lives. However, unless we’re willing to serve Him, we’ll never know what it is.

The Movie Clip:
Unbroken tells the amazing story of Louis Zamperini, a troubled teen turned Olympic runner turned World War 2 POW survivor. “Zamp” as he was called throughout school, his military service, and his adult life, is a testament to human fortitude and endurance, both physically and mentally.

During childhood, Louis got into trouble at every turn. Fortunately, his older brother Pete, an athlete, discovered that Louis was a terrific runner, and coached him through high school all the way to the 1936 Olympics. Zamp’s dream of running in the 1940 Olympics in Tokyo was shattered when the Japanese bombed Pearl Harbor, bringing the United States, and Zamperini, into the Second World War.

On a rescue mission over the Pacific Ocean, Zamp’s own rickety plane malfunctioned and crashed into the blue abyss. He, along with two others, survived the impact; they spent several weeks drifting at sea before being taken prisoner by the Japanese.

During his stay in various prisoner of war camps, Zamp was tested physically, emotionally, and spiritually. He was treated horribly, beaten often, and subjected to cruelty beyond imagination. But he survived the entire ordeal to go on to live a life that brought God tremendous glory!

His story of continual sacrifice and victory over the fiercest odds is a compelling one for all of us today.

Introducing the Clip:
I want to show you a clip from the inspiring movie Unbroken, the story of Louis Zamaprini’s life. Several of you may know that “Zamp” was a troubled kid who found out he could run like a gazelle, and focused his energies on running for trophies instead of running from the police. He competed in the 1936 Olympics and would have run in the 1940 Olympics, too, but he along with thousands of others were called upon to fight in the brutal conflict known as World War 2. The scene I’m going to show you takes place midways through the war after Louis’ plane crashed into the Pacific Ocean on a search and rescue mission. When we meet him, he and his fellow survivors have been stranded at sea for 18 days. The only food they have is whatever they can fish out of the ocean. The only water they have comes from intermittent rains. You’re going to hear a conversation Louis and Phil have about the meaning of life and then see how Louis responds to a life-threatening storm. Let’s take a look at what was going on in Louis’ head during this tumultuous time in his life.

The Video Clip:
The clip for this resource can be found online at the following link:
http://www.wingclips.com/movie-clips/unbroken/is-there-a-plan

Transitional Statement:
I’m not sure how I would have reacted had I been in that life raft with Louis…. But you heard the questions he asked his friend, Phil. He wanted to know if God had a plan for his life. He wanted to know if there was some sort of purpose to his existence. Then, when the storm struck, and he thought he was going to die, Louis made a promise to God. In essence, he told God that if He got him out of that raft alive, he’d spend the rest of his days serving God. What Louis probably didn’t know at that time was this: God has a unique and perfect plan for every single one of our lives. However, like Louis, unless we’re willing to serve Him, we’ll never know what that plan and purpose is. Let’s spend a few moments talking more about this reality.

Context: Jonah is in the belly of a great fish. He got there by completely disobeying God. He was trying to run from God because God wanted him to preach to the terrifyingly evil city of Nineveh. Jonah would ultimately spend three days in the belly of the fish before being spit up onto dry land and given another chance to be faithful to God.

Then Jonah prayed to the LORD his God from inside the fish. 2 He said, “I cried out to the LORD in my great trouble, and he answered me. I called to you from the world of the dead, and LORD, you heard me! 3 You threw me into the ocean depths, and I sank down to the heart of the sea. I was buried beneath your wild and stormy waves. 4 Then I said, ‘O LORD, you have driven me from your presence. How will I ever again see your holy Temple?’ 5 “I sank beneath the waves, and death was very near. The waters closed in around me, and seaweed wrapped itself around my head. 6 I sank down to the very roots of the mountains. I was locked out of life and imprisoned in the land of the dead. But you, O LORD my God, have snatched me from the yawning jaws of death! 7 “When I had lost all hope, I turned my thoughts once more to the LORD. And my earnest prayer went out to you in your holy Temple. 8 Those who worship false gods turn their backs on all God’s mercies. 9 But I will offer sacrifices to you with songs of praise, and I will fulfill all my vows. For my salvation comes from the LORD alone.” 10 Then the LORD ordered the fish to spit up Jonah on the beach, and it did.


Wrap Up:
As we saw in the clip, Louis faced a perilous moment in the raft on the Pacific Ocean. His hope was stretched to the limits and he was on the brink of giving up. More than his physical dilemma, he was troubled in his heart about what his greater purpose was in life.

We watched the clip about “young Louis,” the Louis who didn’t know what his purpose was. But that Louis went on to survive the war, return home from the traumatic experience, and get married, only to face nightmares that he tried to fend off with alcohol. With his life in ruins again, without anyone to blame but himself, he remembered the promise he made to God out on that raft.

I want to show you one more clip about Louis’ life, the life he lived after he met Jesus.

Louis went on to live a very fascinating life. In addition to offering forgiveness to his Japanese captors, Louis also traveled around the United States talking about his faith in Jesus. He wrote two books about his ordeals and trials and ultimate victory in Jesus. He even started a camp for troubled boys called Victory Boys Camp.

In some regards, Louis was a lot like Jonah: when he finally decided to obey God, to keep his promise to God, and to serve God, then and only then did he know what his purpose was in life.

You and I are the same way. We cannot know what our purpose is in life until we submit our lives to God. Here’s why: we didn’t invent us…God did. He gave us life. Our lives belong to Him. If we’re trying to do our own thing, we’re never going to figure out what our purpose is in life. We have to give our lives to Jesus to be able to leave a significant mark on this world.

We’re going to close up in a moment in prayer. I’m going to ask God to help you understand His will for your life and what you can do to honor Him like Louis and Jonah did. But if you’d like to talk about this topic in more detail, hang around and speak with one of our adult leaders. They want you to know what your purpose is in life as much as you do!