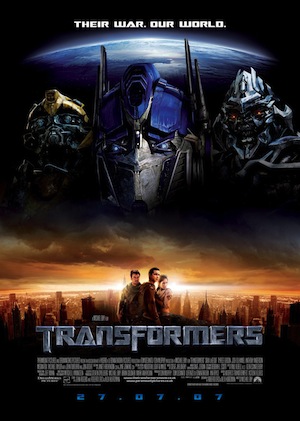 (DreamWorks Pictures / Paramount Pictures, 2007)
Main Point of Discussion: Following Christ is a life-altering decision, which sometimes requires us to leave something behind.

The Movie Clip: “You’ll want to say you had the guts to get in the car.”

Transformers is a fun, action-packed movie based on the old cartoon we used to watch as kids. The movie is made by Michael Bay (Armageddon, The Island), and the special effects are incredible. Transformers is about a group of alien robots, whose civil war is brought to earth. A high school student who has certain artifacts in his possession becomes a very important part in the struggle between the two sides. Although the movie is relatively clean, there is a little bit of crude humor and one particular conversation toward the beginning of the movie that would unfortunately keep me from showing it to the youth group.

The clip that we’re using ends with a great line. In the movie, Sam is a high school student who becomes involved with the Autobots (the good Transformers). Sam is being protected by an Autobot named Bumblebee, who in the clip has just been in a battle with one of the Decepticons. At this point, Sam has his first conversation with Bumblebee. At the end of the scene, after explaining to Sam that the Transformers are alien robots from another planet, Bumblebee transforms into a yellow Camaro, opening the door for Sam and his friend Mikaela. Now Sam and Mikaela see a fork in the road: they can either enter the car and join the Autobots in a life-changing adventure, or walk away and go back to their “normal” lives. After Sam’s great last line, the two get in the car and drive away.

Sidenote: One of the cool things about this scene is that it follows a huge action scene between two Transformers. If you’ve got the time and just want to add some fun in your clip, you can actually start the clip earlier, to catch some of the action and add some length to your clip.

Introducing the Clip:
Today we’re going to watch a scene from the movie “Transformers.” Don’t worry, you don’t have to see the whole movie to understand our clip. In this scene, there has just been a huge battle between two Transformers. Now, the main character Sam is going to actually talk to the Transformer, Bumblebee, for the first time. At the end of the scene, Sam and his friend Mikaela are faced with a huge decision. Pay attention to the question that Sam asks Mikaela at the end of the scene, and then we’ll talk about it afterward.

Sam: Not so tough without a head, are you? (Sam kicks the robot’s head.) Here, come on.

(Sam and Mikaela see Bumblebee walking toward them.)

Mikaela: What is it?

Mikaela: What are you doing?

Sam: I don’t think it wants to hurt us. It would have done that already.

Mikaela: Really? Well, do you speak robot? Because they just had, like, a giant droid death match.

Sam: I think it wants something from me.

Sam: Well, ‘cause the other one was talking about my eBay page.

Mikaela: You are the strangest boy I have ever met.

Sam: (to Bumblebee) Can you talk?

Sam: So you… you talk through the radio?

Bumblebee: “Message from Starfleet, Captain”… “Throughout the inanimate vastness of space”… “Angels will rain down like visitors from heaven! Hallelujah!”

Mikaela: Visitors from heaven? What… What are you, like, an alien or something?

(Bumblebee transforms back into the car, and opens his door for them to get in.)

Bumblebee: “Any more questions you want to ask?”

Sam: He wants us to get in the car.

Mikaela: And go where?

Sam: Fifty years from now, when you’re looking back at your life, don’t you want to be able to say you had the guts to get in the car?

(Sam and Mikaela get in the car.)END CLIP AT 56 minutes and 41 seconds.

Transitional Statement:
I love the way this scene ends. If you didn’t catch the whole thing, that question asked at the end of the clip goes like this: “Fifty years from now, when you’re looking back at your life, don’t you want to be able to say you had the guts to get in the car?” Sam knows that it takes guts to get in the car. He knows that if they get in the car, then they will go on a very crazy and dangerous adventure. They don’t even know where they’ll end up. But he also knows that if he doesn’t get in the car now, he’ll always wonder what would have happened if he’d had the guts to get in. We’re going to talk about life choices today, and what it may take for some of us to “get in the car.” Perhaps we’re not going to be joining any giant alien robots in a fight for survival, but some of the choices we face in our lives can be completely life-altering.

Matthew 4:18-20 (NIV)
[18] As Jesus was walking beside the Sea of Galilee, he saw two brothers, Simon called Peter and his brother Andrew. They were casting a net into the lake, for they were fishermen. [19] “Come, follow me,” Jesus said, “and I will make you fishers of men.” [20] At once they left their nets and followed him.

Wrap Up:
What was the question Sam asked at the end of the “Transformers” clip? He asked, “Fifty years from now, when you’re looking back at your life, don’t you want to be able to say you had the guts to get in the car?” Sam knew that the decision in front of him was huge. It was going to change his life. Every day, we are all faced with a decision like this: Am I going to follow Christ and live out His plan for my life, or am I going to just walk away and go about my business? Do I actually have the guts to get in the car and follow Him? For many of us, that means doing what Peter and Andrew did, and leaving something behind. All of us have some sort of a “net” in our life, whether it’s popularity, money, bad language, or even something as small as video games. But if it keeps us from being able to get in the car and follow Christ, it’s a net and we need to drop it. Today we’ve all identified a net in our lives that we need to leave behind in order to follow Christ. Sit quietly for just a moment and think about what it is that you said you’re going to do this week to leave your nets behind. What is that one thing you’re going to start doing tomorrow? And while you think about that thing you’re going to leave behind, there’s really only one question left for you: Do you have the guts to actually leave it behind and get in the car?