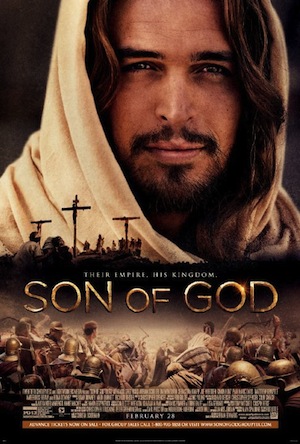 Main Point: Jesus wants to change our lives…and then change the world through us.

The Movie Clip:
Son of God is the latest epic biblical drama recounting the life and ministry of Jesus Christ. It is an adaptation of History Channel’s “The Bible” miniseries and stars Diogo Morgado as Christ. The film covers the birth of Jesus, His public ministry, and concludes with His death and resurrection.

The movie has experienced mixed reviews, but succeeded in generating over $26 million during its opening weekend at the box office.

The film was rated PG-13 for its scenes of violence (scourging, crucifixion, etc).

Introducing the Clip:
I want to show you a clip from the movie, Son of God. It’s the scene where Jesus meets Peter, and invites the fisherman to join Him in changing the world. If you’ve been in Sunday School more than 4 times, you’re probably familiar with this story: Jesus performs a miracle to capture Peter’s attention, and then calls him to something far wilder that what the humble fisherman just witnessed. This dramatic interpretation of that historic event from 2,000 years ago helps us to understand what Peter might have been thinking in that moment. Take a look at the clip and try to put yourself in Peter’s sandals.

The Clip:
The movie clip can be found at the following link provided by WingClips:

Transitional Statement:
You gotta admit: that’s a pretty compelling way to get people to join you! Just perform a completely unexplainable miracle…and then say, “Let’s go!” But it worked in Peter’s case. He did end up following Jesus for the rest of his life. That’s because, in this moment we just watched, Jesus changed Peter’s life. Then, Jesus invited Peter to go with Him to change the world. That’s the order it always happens. Jesus changes us…then invites us to change the world with Him. Let’s read the Bible’s account of this same story and then talk about that some more.

On one occasion, while the crowd was pressing in on him to hear the word of God, he was standing by the lake of Gennesaret, 2 and he saw two boats by the lake, but the fishermen had gone out of them and were washing their nets. 3 Getting into one of the boats, which was Simon’s, he asked him to put out a little from the land. And he sat down and taught the people from the boat. 4 And when he had finished speaking, he said to Simon, “Put out into the deep and let down your nets for a catch.” 5 And Simon answered, “Master, we toiled all night and took nothing! But at your word I will let down the nets.” 6 And when they had done this, they enclosed a large number of fish, and their nets were breaking. 7 They signaled to their partners in the other boat to come and help them. And they came and filled both the boats, so that they began to sink. 8 But when Simon Peter saw it, he fell down at Jesus’ knees, saying, “Depart from me, for I am a sinful man, O Lord.” 9 For he and all who were with him were astonished at the catch of fish that they had taken, 10 and so also were James and John, sons of Zebedee, who were partners with Simon. And Jesus said to Simon, “Do not be afraid; from now on you will be catching men.” 11 And when they had brought their boats to land, they left everything and followed him.

Wrap Up:
I love the story of Jesus calling Peter to be a fisher of men. I love it because it shows me that Jesus is interested in regular people just like me because Peter was certainly a “regular Joe.” But it also shows me that Jesus wants to use people like me – and you – to change the world.

But first, we have to have our lives changed by Jesus.

Don’t miss that! If we want to change the world – and who doesn’t – we must first have our lives changed by Jesus. For that to happen, we have to come to terms with our sin. In the story we read, Peter acknowledged to Jesus that he was a sinful man. Jesus didn’t discount Peter because of his sin; He forgave him of it, and then invited Peter to join Him. That’s powerful. And each of us desperately need that kind of moment with Jesus. If you haven’t had that moment in your life thus far, please don’t leave here without speaking to me or one of our adult leaders.

But Jesus didn’t stop His relationship with Peter after forgiving him. No, He actually called Peter to follow Him and help change the world. And that’s exactly what Peter did.

Peter followed Jesus for three years and witnessed miracle after miracle. He saw Jesus die, and was then spoken to by Jesus after He was resurrected on Easter. Peter then began to lead the church in Jerusalem. He traveled around preaching the Gospel. Ultimately, he lost his life because of his love for Jesus, but not until he had left a deep impression on history.

So, what about you? Do you want to change the world?