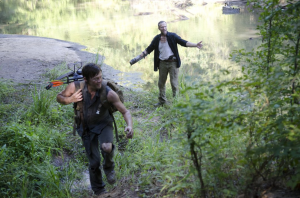 What does the word “family” mean to you? Is it your mother and father and your siblings?  Does it include people that you aren’t related to? Perhaps, the people you call family aren’t even related to you by blood.

My guess is that we all have different answers to those questions. For many of us, our biological family is a source love and security. For others, it only brings up painful memories. Some of us never even knew our biological families. Others grew up with them, but don’t know them anymore.

No matter what your circumstances, most of us agree that the definition of the word family is very fluid.

For Daryl, we are at a place where he is conflicted about who his real family is. Rick and the gang have finally become a real family to him – the kind that he can trust and rely on. He is valued by this new family, and they have grown together in profound ways over the last two and a half seasons. His relationship with Carol is just getting deeper. It is the kind of bonding that only takes place between people who have faced similar trauma in their past.

But now Daryl’s abusive, racist brother Merle is back in the picture. Merle, has crossed a line with the rest of Daryl’s new family that seemingly cannot be uncrossed. So last week, he faced a horrible decision: stay with his new supportive family or go with his blood family. Unfortunately, he chose blood.

As Merle and Daryl are walking in the woods together we finally get some more insight into what Daryl’s life might have been like in the Dixon household. We also find out a few more things about their father.

Merle: You know– you know what’s funny to me? You and Sheriff Rick are like this now. Right? I bet you a penny and a fiddle of gold that you never told him that we were planning on robbing that camp blind.

Merle: Yeah, it didn’t ’cause I wasn’t there to help you.

Daryl: What, like when we were kids, huh? Who left who then?

Merle: What? Huh? Is that why I lost my hand?

Daryl: You lost your hand ’cause you’re a simpleminded piece of s#^!.

Merle: Yeah? You don’t know! (Merle grabs Daryl and rips his shirt- he sees the scars on Daryl’s back) I– I didn’t know he was–

Daryl: Yeah, he did. He did the same to you. That’s why you left first.

Merle: I had to, man. I would have killed him otherwise.  (Daryl starts to leave) Where you going?

Daryl: Back where I belong.

Merle: I can’t go with you. I tried to kill that black b*%#. Damn near killed the Chinese kid.

Merle: Whatever. Doesn’t matter, man. I just can’t go with you.

Daryl: You know, I may be the one walking away… but you’re the one that’s leaving– again. (Daryl leaves)

For the first time, we get a real glimpse into some of the family dynamics that made Daryl into the man that he is today. We already knew that growing up with Merle must have been terrible. But now we know that both Merle and Daryl were physically abused by their dad. We also learn that Daryl felt abandoned, and more importantly, unprotected when his brother left the family. These are clearly some deep scars on Daryl’s psyche that are just being brought to the surface as he explores serious trust issues with his new family, and his old one.

Fortunately, I have no idea what it is like to experience these kinds of serious issues that Daryl is dealing with. I have never been physically abused. I also have a wonderful family that I can trust and rely on. I also have an amazing church family that surrounds me with love and support.

I do, however, know many people who have grown up in situations much more like Daryl’s. As a pastor, I talk to people with similar issues of abandonment and fear every single week. Many of them come to me for counseling and advice. Because I can never fully relate to what many of these people are going through, I often don’t really know what to say to them. I just listen and usually refer them to Christian counselors who can help. I also refer them to mature people in our congregation who have dealt with similar things.  In addition, I offer support and friendship and I do my best to show them what it is like to be in a relationship that is reliable and safe.

Here the author of Hebrews is quoting a well known verse from the book of Deuteronomy.  The verse is about one of the most amazing characteristics of God.  Hebrews is saying that God is someone who you can always trust and that He is someone who will never abandon you.

What does this mean for God’s people?

The author of Hebrews explains further:

Isn’t that amazing? The point of this incredible verse is that God is on our side, He will never leave us and He will always support us.  Consequently, we have absolutely nothing to fear from those who try to hurt us or abandon us.  It doesn’t mean that people can’t continue to leave and abuse us, it just means that we will never be alone, and we have the perfect example from our Heavenly Father as how to love others.

SEASON 3, EPISODE 10 DISCUSSION QUESTIONS:
1) At the end of the last episode, Carol finds out that Daryl has left with Merle. Do you think that she is feeling abandoned now?

2) Rick keeps seeing visions of Lori around the prison. Do you think that he is experiencing a new kind of loneliness at this point?

3) Merle has been missing now for about two seasons. Do you think that Daryl thought he would ever see Merle again?

4) Now that he is with Merle, do you think Daryl is starting to notice that he has changed? How?

5) Daryl abandons Merle, but tells him that it is actually Merle who is leaving.  Why does he say that?  Do you think it is true?

7)How do you define family?  Is it blood or does it extend beyond your relatives?

8) Have you ever felt like there was no one you could trust? What did you do about it?

9) Have you ever had to rely only on God for love and support in a situation? What happened?

10) Have you ever learned how to love and support others because of the way that God loves and supports you? How did God show you His love?