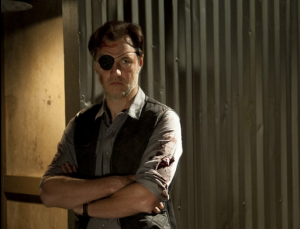 This is a major stumbling block for many people when it comes to their belief as to whether there is even a God. How often do we hear people say, ” I just can’t believe that a good and loving God could let so much evil happen in the world.”

Recently my ten-year-old son was asking me why God allows so much evil to happen in the world. I simply asked him what the alternative was. He pointed out that God could make people be good. I laughed and said that he had arrived at the crux of biggest issue surrounding the problem of evil. God did have a choice, either He could have forced us to be good or He could have allowed us to learn to be good, the way that He designed us to be. Fortunately, God chose to let us make our own choices. But there is a catch – we ultimately are responsible for the choices we make before God.

For most people this is something that we forget – or just don’t believe.

On tonight’s episode of The Walking Dead we get to really peer into the dark heart of The Governor. We knew that this man was insane and evil, but I don’t think that we ever really got to see how deep it went, until now. We also get a glimpse into the philosophy that allows him to get to this dark place.

The episode begins with The Governor torturing Milton, a man that we knew was his friend before the apocalypse. While he is punching Milton in the face repeatedly, he reveals his life philosophy.

The Governor: I’m gonna tell you the secret. There’s a threat, You end it. And you don’t feel ashamed about enjoying it. You smell the gunpowder and you see the blood… you know what that means? It means you’re alive. You’ve won. You take the heads so that you don’t ever forget. You kill or you die.

The Governor believes that he lives in a Godless universe where the strong survive and the weak are exploited or die. This is how he believes that he “wins”. The only consequence that really happens in life is death, and that only happens to the weak. You kill or you are killed. And he makes it clear that, not only is he a killer, but he enjoys being one.

Of course we get to see this philosophy lived out in some extreme ways. His plan for getting rid of both Milton and Andrea is so diabolical that you wonder if he even has a conscience. But, if this isn’t enough, later in the episode we get to see probably one of the most frightening acts of sadism that we have seen on the show to date. When the governor is forced to retreat from the attack on the prison and his fellow “soldiers” from Woodbury refuse to go back, he just shoots them all. I love the expression on Martinez and Shumpert’s faces as The Governor just expects them to get in the truck with him after the massacre. You can see them both working out their escape plans in their minds.

At first you just think that The Governor has lost it. But then as you think about it, you realize that he lost it a long time ago, he is just now revealing this to others. We will see how long Martinez and Shumpert stay by his side.

In the book of John, Jesus teaches that evil people don’t actually get away with being evil. In a verse that seems especially apropos to The Walking Dead He says,

Interestingly, this is the verse that is left open and highlighted in Hershel’s bible back at the prison. The Governor actually goes out of his way to look at the bible, and when he reads the verse, he drops it in disgust.

This is a verse that should be especially disturbing to The Governor. He doesn’t believe it because, if it is true, his philosophy is seriously flawed. Essentially the verse is saying that nobody gets away with anything.

For me, this verse helps me to understand a little bit more as to why evil people are allowed to be evil. But, if I am honest with myself, I think that the verse cuts a little deeper than that. For me, I realize that in many ways I fit in the category “those that have done what is evil” much more than “those who have done what is good.”

Unlike The Governor, I have never killed anyone. Come to think of it, I have never tied up someone and left them in a room with a half dead friend who will turn into a Walker and eat them either. I also don’t collect heads and put them in fish tanks. But, that is actually the problem here. I can always find someone who has done more evil than I have. (I guess The Governor just might too… if he stuck around long enough. Cough, Cough. Negan… Cough!)

But the reality is that, many times in my life, I have lived like there are no consequences to my actions. I have either refused to believe (or conveniently forgotten) that there is a sovereign God watching over everything that I do. But while this would normally sound kind of Orwellian, I actually take comfort in this fact. I take comfort in this because the same God who holds me accountable for my actions, also sent His own son Jesus to save all of us.

In the next chapter of the book of John Jesus points out  “For my Father’s will is that everyone who looks to the Son and believes in him shall have eternal life, and I will raise them up at the last day.” (John 6:40, NIV)

This is the central truth of the Gospel. We are all allowed to do evil, and sometimes there are no earthly consequences. But eventually we are held accountable by God for all of these things. But the good news (the definition of the word “gospel”) is that those who believe in Jesus are saved and forgiven for the terrible things that we do. Ultimately we don’t “win” because we survive, we “win” because of the grace of God.

2) Do you think that saving people’s lives justifies the diabolical things that The Governor does?

3) Do you believe that The Governor believes that he is actually helping others by being so ruthless?

4) Carl kills a surrendering teen from Woodbury and later explains that he “did what he had to do.” Do you think that Carl is starting to believe the “kill or die” philosophy that The Governor lives by?

5) Do you think that there is an element of the “kill or die” philosophy in Rick? Does he seem to be fighting it?

6) Do you believe that it is possible to do terrible evil in this life and never suffer earthly consequences for it?

7) Jesus said that all will be held accountable for their sins. How does this make you feel? Does it help you understand why there is evil in the world?

8) Does knowing that God is with you always, change your perspective on the choices that you make?

9) The bible teaches that God sent His son Jesus into the world and that Jesus did no evil. If that is true, what does that mean when it comes to understanding evil and our own predicament? Does Jesus have the right to judge?

10) What does it mean in your life, that nobody gets away with anything?

11) Do you think that surviving is how “win” at life? If so, how long do you think you can survive? What happens then?

12) How do you think that you would live your life differently knowing that you can live eternally with Jesus?