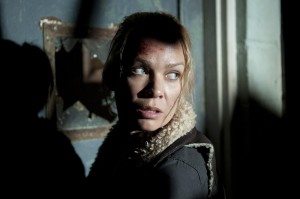 Have you ever been publicly accused of something that you know you did, but you didn’t want anyone to find out?

Or worse, have you ever been accused of something that you know you didn’t do?

The problem is, for most people, the reaction to both of these scenarios is usually the same. People usually swear incessantly that they did not do what they were accused of doing. The guilty and the innocent both swear that they are innocent.

We have all seen it. The accuser says the exact opposite thing that the accused says. Often there is a little room for interpretation, but in most of these cases, one person or both people are just flat out lying. And it is absolutely the worst when there is no evidence to back up either story. In the United States we call it a “he said, she said” situation. No matter how you look at it, one or both of the people in the situation are lying.

This week on The Walking Dead we are watching a “he said, she said” situation coming to fruition about The Governor. For us, the situation is clear because we know that the Governor is a psychotic megalomaniac who collects heads in fish tanks. A few of the characters from the prison know that this is true, but Andrea and most of the residents of Woodbury have no idea. The accusations are starting to spread around the community, but The Governor (not unlike many politicians we know in the real world) is swearing and promising that these rumors are just lies from people who want to take his power.

Andrea, until now has been caught in the middle, but she is starting to see the light. Not only can The Governor not be trusted, but she needs to get out of Woodbury before he discovers that she knows.

Things come to a head when Andrea discovers The Governor’s torture chamber and Milton stops her from putting him down with her Beretta. Milton tells her that The Governor (he calls him “Phillip”) used to be good and that Milton believes that he can change. (When I was in youth ministry, I recall having a similar conversation with a 15 year old girl talking about her 22 year old “boyfriend” who was going to jail for his 3rd DUI.)

So Andrea decides to bolt and she runs into Tyreese and Sasha on her way over the wall.

Tyreese: What are you doing?

Andrea: Got to get out of here.

Sasha: What is this about?

Andrea: Just get out of my way. Don’t.

Tyreese: Relax. Nobody’s got to get hurt here.

Andrea: The Governor, he is not what he seems to be.

Sasha: He seems pretty straight up to me.

Andrea: That’s what I thought, too. But I’m telling you, he has done terrible things. He’s planning worse. I’ve got to get out of here and you should, too.

In this scene Tyreese is smart enough to not get in the middle and try to stop her. But later he also is honest enough to tell The Governor what happened. Tyreese is a man of integrity. He clearly doesn’t want to take sides here. But I think he also doesn’t entirely trust “Phillip” now. One side note, we don’t even really know that Phillip is The Governor’s real name. He is called Brian in other places.

The rest of the episode follows every beat of a horror movie while Andrea is stalked by The Governor. Just when she is in sight of the prison she is snatched by “Phillip” and by the end of the episode she is tied up in the torture chair thinking “if I had only shot him when I had the chance.” The rest of Woodbury still doesn’t know what happened and they remain clueless about the governor’s lies.

In our culture, public figures are caught lying so many times that people generally assume leaders are always lying. You have probably heard the joke “how do you know when a politician is lying? His lips are moving.” This creates all kinds of problems for honest leaders. Whenever a leader is accused of something, generally they are thought of as guilty until proven innocent. And to make it worse, it is usually liars who are better at convincing the public of their case.

Fortunately, there is one thing that really saves leaders in these situations – demonstrated integrity. When a leader has shown that they can be trusted over a long period of time, this almost always trumps groundless accusations.

In Proverbs 10:9 Solomon describes this principle unmistakably. He says “Whoever walks in integrity walks securely, but whoever takes crooked paths will be found out.” (NIV)

I really believe in this principle. When you have a habit of lying about things, even if you are very good at it, you aren’t going to get away with it every time. If you have integrity, people will learn that they can trust you. Then when the situation comes around where you are falsely accused of something, it is much easier to convince people that you are innocent.

I can tell you from experience that I have never been falsely accused of something more than once. When I was in my early twenties I had a very pliable relationship with the truth, and it became a huge problem in my life. But as I grew as a Christian and grew into a husband, father and pastor with integrity I noticed that I didn’t spend as much time convincing people of things. People just believed what I said. Now, as a pastor, I am occasionally accused of things that I didn’t do (this happens to pastors more than you might think). But because I have no established pattern of doing those things, and I am surrounded by people who trust me deeply, people just don’t believe the accuser. In addition, people who falsely accuse people of things, usually have done it before many times.

I think that the profound point that Solomon is making here is that the key to being trusted is to be trustworthy.

1) The Governor seems obsessed with capturing Michonne and torturing her. Do you think other people are starting to notice his madness?

2) Milton points out that killing The Governor would only put Caesar Martinez in charge. Do you think Martinez knows this?

4) Andrea had her gun pointed at The Governor for a few seconds before Milton stopped her. Why do you think that Andrea hesitated to shoot The Governor when she had the chance?

5) Why do you think it was The Governor himself who was able to capture Andrea (think about his tactics)?

6) Why do you think people like Tyreese start out believing The Governor? Do you think it will last long for Tyreese and Sasha?

7) Who do you think it was who sabotaged the walker pit? Do you think The Governor knows who it was?

8) Have you ever had someone you trusted turn out to be someone who was consistently lying to you? What did that do to your relationship?

9) If someone doesn’t catch you lying to them, does it still hurt the relationship? Do you think it is possible to have a relationship where you lie to the person indefinitely or do you think that someday you will be caught?

10) Do you believe you can have a functional relationship without trust?

11) One of the greatest attributes about Jesus is the fact that we all can trust him. Do you believe that? Has Jesus ever done anything to demonstrate that He can’t be trusted?

12) What would (or does) it mean that you can have a personal relationship with a God who will never lie to you?