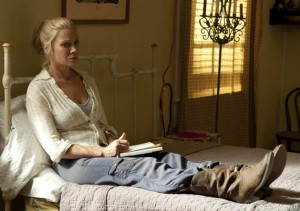 It happened to me when I returned home to California after one semester in college in Minnesota. I was a freshman and I was attending college about two thousand miles away from where I grew up. The experience was shocking, but not nearly as shocking as the experience when I visited home for Christmas break. Every one of my friends seemed different… or were they? In actuality, it was me who had changed and most of my friends who hadn’t left California had stayed the same. It happened again to me a few years later when I studied a year abroad. I came home a very different person, making home seem more like a foreign culture. The surprise to me was that I had experienced as much culture shock coming home as I had abroad.

In this week’s episode of TWD we see this happening on many levels. Andrea has been separated from the rest of the group for a very long time, and she is finally reunited with Rick and the people at the prison. The reunion is actually shocking to almost everyone, because let’s face it, a lot has changed since she was last with this group. Andrea is experiencing culture shock, with a group that she used to see as family.

She seems genuinely surprised when they greet her at gunpoint, frisk her and disarm her immediately. It is very clear to us that Andrea doesn’t understand what is really going on at Woodbury or at the Prison. She also doesn’t understand that people in Ricks group have really gone through a lot of change since she saw them last.

First she notices that T-Dog, Lori and Shane are gone. They explain to her that they are all dead and the look on her face gives us a little bit of a reminder of her past brief dalliance with Shane. It reminds us that she does have a bit of a “bad boy” complex.

They also explain that Rick has a baby and that there are some other new people that she doesn’t know. Hershel is missing a leg, Carl has grown up quite a bit, Glenn and Maggie seem quite a bit more grizzled, Beth fancies herself as Adele and even Daryl seemed to be less like Merle and more like a part of the family. Also, Carol is well on her way to transitioning from June Cleaver to Michael Corleone.

But of course the biggest shock of all is Rick. He is still wandering around the prison seeing “Lori ghosts”. Rick just appears to have lost most of his marbles. This is more like an elephant in the room at this point, because not a lot of people know how to deal with this. Even Carl approaches his dad carefully and asks him to take a break from leadership for a while.

But Michonne is the one who hurts the most because of what happened at Woodbury. Michonne saved Andreas life, but then felt like she was betrayed when Andrea chose the governor over her. They discuss this when they first get a chance to be alone.

Andrea: You poisoned them.

Michonne: I just told them the truth.

Andrea: I didn’t choose him over you. I wanted a life. Once we entered Woodbury, you became hostile.

Michonne: That’s ’cause I could see it.

Michonne: That you were under his spell the second you laid eyes on him.

Andrea: That is not true.

Michonne: And you still are.

Andrea: No, I am there because those people need me.

Michonne: And what about these people?

Andrea: I am trying to save them, too.

Michonne: I did not realize the messiah complex was contagious.

Michonne knows that Andrea is being manipulated by the governor. She knows that she really isn’t the same person that she wandered around the woods with for all those months. Then Andrea was someone that Michonne trusted and cared deeply for. Now, Andrea has allied herself with a true enemy, someone that Michonne is now at war with. Andrea seems genuinely confused by this whole scenario simply because she doesn’t know what is really going on in Woodbury. She also realizes that the group that she once saw as family, is now foreign to her.

Andrea is lost, alone and she has some big choices to make in the future.

I am writing this several years after the episode was aired on television. Recently, season six of the show just finished and I am re-watching these episodes from season three to help complete all of the earlier season write ups for The Gospel According to the Walking Dead column. So unlike the columns I have been writing for season six, here I know what happens in the future. I happen to know what characters are still alive (don’t worry, I won’t spoil it) and which ones are dead. I also happen to know how these characters have all changed.

When I watched this episode, I couldn’t help feel a little bit like Andrea when she entered the prison. I wondered to myself, “who are these people?” Many of them are unrecognizable and some of them (both in Woodbury and the Prison) I had completely forgotten about.

In TWD, characters are not the two dimensional stereotypical caricatures that are so prevalent your average television script. Here are characters who make mistakes, suffer consequences, sometimes die and most importantly, they change. These are people who grow and metamorphosize into completely different people. Think about it. How many other shows can you think about that do this? I can only think of a few.

As a pastor and a follower of Jesus, I can say that most of these things that I have witnessed have happened because of the gospel. Nothing can change a person like Jesus Christ.

“At one time we thought of Christ merely from a human point of view. How differently we know him now. This means that anyone who belongs to Christ has become a new person. The old life is gone; a new life has begun!” (NLT)

Here Paul is saying that part of the process of becoming a follower of Jesus is changing who we are. This doesn’t just happen to some Christians, it happens to all of us. Jesus is in the business of making us into new people entirely. It is true that some people in the world do change on their own. But with Jesus, every person who decides to follow Him will be completely transformed into a person who loves God and their neighbor in unprecedented ways. That is just the perfect and irresistible result of the gospel.

1) Rick seems to be losing his mind. Should he listen to Carl and step down as their leader?

2) Merle fought alongside Rick outside the prison and (you could argue) he saved Rick’s life. Does this mean that they should trust him now?

3) Merle points out that that governor could starve them out if he wanted to. Should they just leave the prison before it is too late?

4) Andrea seems to be trying to keep Woodbury and the people at the Prison from trying to kill each other. Is that realistic at this point?

5) Even if it isn’t realistic, should they be trying to anyway?

6) What do you think Jesus would want them to do?

7) Hershel found a new bible and showed it to Merle. What do you think that Hershel needs to learn from the bible?

8) Do you think it is true that people change?

9) How do people usually react when you do actually change? Do they instantly trust you or does it take a while?

10) When Christ comes in and changes your heart, what do you think happens to your actions?

11) What does he say happens to your old life? What might be some of that “old” in your life?