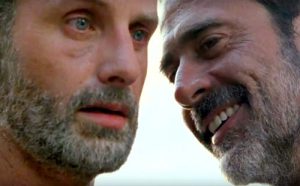 “Character cannot be developed in ease and quiet. Only through experience of trial and suffering can the soul be strengthened, ambition inspired, and success achieved.”

This inspirational statement by Helen Keller could not be more apropos to this week’s episode of The Walking Dead.

Come to think about it, this quote could sum up one of my favorite things about this entire show. TWD is not really about zombies; it is about the choices that people make in the midst of a world with no rules, safety or guarantees (also true about Jonathan’s book, The Zombie Apocalypse Survival Guide for Teenagers). Really this show is all about character.

Tonight’s episode takes place only three days after the events of the season opener. People are clearly in shock and Negan wants to make sure that they stay that way. Negan also realizes (after Carl almost smokes a guy for taking medicine) that it is time to completely disarm Rick and the people of Alexandria. So this episode is one of those where we see what people are made of. Many people are already convinced that they should never resist Negan (just look at all of his followers). So who is going to resist Negan overtly? Daryl tried and Glenn paid the ultimate price for it.

But now, the question is, who is going to resist Negan more subtlely?

Rosita is risking everyone’s safety by hiding a gun and asking Eugene to make her a bullet. Michonne is risking everyone’s safety by going out to practice her sniper skills. Fortunately she can’t hit a walker, but she can accidently hit a deer (which gives her an excellent cover story for Negan). Spencer risks everyone’s lives because, well… he is just a winey little punk hiding food, booze and guns. If Carol were in Alexandria, we know that she would be putting poison in the cookies right about now.

But this week the most interesting part of a very long and bleak episode was the big character revelation for Rick. I couldn’t believe what he said to Michonne after Negan left Alexandria:

Rick: We play by their rules, and we get some kind of life.

Michonne: [Emotionally] What kind of a life?

Rick: [Sighs] You know, I had a friend. I don’t talk about him. He was my partner. He got Lori and Carl to safety right after it all started. I couldn’t… I was in the hospital. I-I didn’t know what was happenin’. My friend His name was Shane. Well, him and Lori they were together. They thought I was dead. I know Judith isn’t mine. I know it. [Breathes deeply] I love her. She’s my daughter. But she isn’t mine. I had to accept that. I did. So I could keep her alive. I’ll die before she does, and I hope that’s a long time from now so I can raise her and protect her and teach her how to survive. This is how we live now. I had to accept that, too, so I could keep everyone else alive.
Michonne: It’s not your fault when people die.
Rick: Not always, but sometimes — sometimes it is. You have to accept this — all of us do — or it won’t work.
Michonne: I’m gonna try.

Here Rick is trying to explain to Michonne something important about himself. He is trying to communicate part of nurturing and taking care of people is learning to accept difficult truths. He figured this was probably the perfect time to address the elephant in the room that has been there since season one (spoiler alert) – most likely Judith is not his child. But he is saying this, not because he just realized it. He is saying it because he has known this all along, and it doesn’t change how he loves or takes care of his “daughter.” You see Rick actually is a man of character. He may seem a little weak right now, but he knows that resisting Negan now is only going to get more people that he loves killed.

Now I don’t believe for a second that he won’t be looking for an opportunity to give Negan his comeuppance. Just notice the way he looked at the sign at the gate advertising Alexandria’s motto – “Mercy for the lost, Vengeance for the Plunderers”. But Rick is telling Michonne sometimes you have to make difficult decisions in order to save people. This is what Rick knows to be true—you have to adapt to each situation that life gives you in order to save people. Right now, he believes that acceptance of the difficult reality that they are is the only way to survive.

This is just who Rick is – a man of character (feel free to disagree in the comments below).

Character is one of those things that seems to be lost in our culture today. Most people are more concerned with how they are perceived than how they actually are. People are also more dedicated to making their lives easier and more fun than taking actual responsibility for their choices. You only have to look at how many people in our country abandon their families because it might just be too inconvenient. And this is happening without a zombie apocalypse.

Jesus, on the other hand cared a lot about character. In one particular passage in Matthew, he is arguing with the religious snobs of the day – the Pharisees. They are the ultimate picture of people who look great on the outside, but are conniving and evil on the inside.

In Matthew chapter 12, Jesus has just healed a man and the Pharisees say that it was by the power of Satan. But Jesus is incensed by the irony of their statement. Jesus did something miraculous because of God’s mercy and power. Satan only acts in his own selfish interest and malicious intent. So Jesus gives them a little lesson in character. He says in verse 33-36,

33 “Make a tree good and its fruit will be good, or make a tree bad and its fruit will be bad, for a tree is recognized by its fruit. 34 You brood of vipers, how can you who are evil say anything good? For the mouth speaks what the heart is full of. 35 A good man brings good things out of the good stored up in him, and an evil man brings evil things out of the evil stored up in him. 36 But I tell you that everyone will have to give account on the day of judgment for every empty word they have spoken. (Matthew 12:33-37, NIV)

Generally people can get away with pretending to have character, especially when times are good. But it is usually when times get tough that the true nature of one’s character really comes out.

However, let’s face it, many people can pretend for a very long time. Some can even pretend for their whole lives. But Jesus says something important here. He points out that nobody really ever gets away with anything. He says so clearly that “everyone will have to give account on the day of judgment for every empty word they have spoken.” In other words, you may be able to fool people, but you can’t fool God.

You see, to God, it is where your heart is that matters. Do you look to God and the scriptures for guidance or do you look to whatever will make you look good in other people’s eyes. According to Jesus, it is not how you look on the outside, but what is going on within that matters.

1) Do you think that people should resist Negan? If so, how?

2) Negan takes all kinds of useful things from Alexandria, but he doesn’t need all of them. He clearly burns the beds to send them a message (Or maybe he was just a fan of the 80’s band Midnight Oil). What do you think that message is?

3) Do you think Rick is acting this way because he is afraid? If so, why? If not, why do you think he is giving in to Negan so much?

4) What do you think Daryl is thinking as he watches all of this go down?

5) Why do you think Rick tells Michonne about Judith in this situation?

6) What does it say about Rick that he is acting as the father to a child that he is pretty sure is not his own?

7) What do you think Jesus means when he is talking about trees showing good or bad fruit?

8) Is Jesus more concerned about what you do, or why you do it? Why?

9) Do you think it is possible to fool Jesus about what is going on in your heart? Why or why not?

10) Character can be defined as “who you are in the dark.” What do you think about that definition?

12) What is one way you can allow God to work on your character this week?