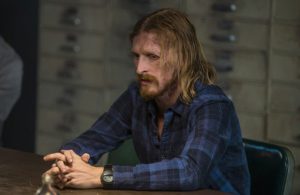 Has anyone ever stabbed you in the back… metaphorically, of course?

It doesn’t feel good when someone you trust betrays you. And most of us try very hard to surround ourselves with people who won’t turn on us like Simon and Dwight turned on Negan. But it doesn’t always work out that way. Sometimes in life, people are able to betray us because we simply never actually know what is going on in the their minds.

However, Negan has put himself in a position where he needs to have a healthy amount of distrust of the people around him to just survive. That is what happens to bullies. They need people around them to stay afraid, and when they sense that fear is gone, they get rid of their enemies before they can betray them.  But that also means that Negan needs to be very good at smelling out all of the plots against him because, with his tactics, let’s face it, there will always be plots against him.

But tonight I really hoped that all of these twists and betrayals would not end up exposing Dwight as a turncoat. But it did happen tonight and fortunately the scene was amazing. Negan had just crushed Simon’s throat with his bare hands, and during the fight, Dwight had sent a note with Negan’s supposed plan to Rick (via slimy Gregory). Afterwards, Negan decides to escort Dwight to his quarters.

Negan: What’re we gonna do? Such a d**n shame. A waste slinking behind my back like some kind of d***less worm. Planning on killing me. Like, what else am I gonna do besides crush the guy’s throat?

Negan: Eh, you know, what’s bad for Simon, it’s good for you. And I know we’ve had our ups and downs, D, but I’ve always been able to count on you. So congratulations. You are my new right-hand man. That is, if you accept the promotion.

Dwight: I do. And I’ll help you finish this thing with Rick.

Negan: Don’t sell yourself short, D. You already have. [They walk into Dwight’s room and Laura is waiting. Armed saviors enter and train their guns on Dwight] Well, you look surprised, Dwight. Yeah, see, I found her on the side of the road. Laura, why don’t you tell D what you told me?

Laura: That night in Alexandria, he turned on us. He killed our team. I ran, and I kept on running. I was hurt. But what kept me alive was the thought of getting back here and exposing you for the scum weasel you are.

Negan: [CHUCKLES] It all makes sense now. You told Rick when to attack. How to get to the outposts. You keep us locked in here, slipping them workers guns. Maybe you even lied to me about killing Sherry. [pauses] Oh, h*ll. You, for sure, lied to me about that. So, what? Hmm? You think you’re some sort of a [INHALES SHARPLY] hero? No.You are nothing. A nobody in way over your head. But when I said that you would come through for me when I needed it, oh, I meant that 110%. See, I knew that I could count on you to deliver my plan to Rick, my brilliant, if I do say so myself, fake-*ss plan. [SIGHS] You used Gregory for that, right? I mean, I was thinking maybe you’d take some kind of field trip or something, but no, you got yourself a little delivery boy. Good for you. To deliver all that intel to Rick and the p*ss patrol that’s gonna lead them directly into the line of fire. They are not gonna know what hit ’em, all thanks to my new right-hand man. [LIPS SQUEAK] Now, see, I I thought about killing you, and then [INHALES SHARPLY] I thought maybe that’d be too dignified for a backstabbing, double-crossing dirtbag such as yourself. No, Dwighty boy, I got plans for you.

Dwight is now in serious trouble and Rick, Maggie and the crew at Hilltop may be in for some more serious trouble unless they are involved in some manipulation as well. In this half of the season, there have been lots of secrets and now we are finally seeing all of these betrayals being exposed. I have no idea what is going to happen in the finale, but I am guessing that most of this deception is going to be out and there won’t be many turncoats left when the episode is over.

But I have to admit that all of this backstabbing and double-crossing has been kind of fun (I love a good spy novel) on the show, but in real life, it is a very different experience. Like most of us, I have been betrayed before. People whom I have trusted have lied and double-crossed me and they have been some of the worst experiences of my life.

But worse than that, I have also been the betrayer. Not everyone can say that, but it is very true for me… especially when I was a younger man. I have lied to people. I have said one thing while knowing that I meant something else. And, probably the most regretful, is that I have sacrificed friendships over lies and deception.

Either way, deception and betrayal are terrible things in the real world, and they happen to most of us (and if we are honest, most of us have done it too). At first, betrayers usually have all kinds of excuses, but as time goes by, the truth often comes out. Back-stabbing is usually just selfishness and greed winning out over honesty and generosity.

If we think about it, there are plenty of stories like this in the bible too. Judas may be the most famous human betrayer in the scriptures, but you don’t have to look far to see lots of double-crossing going down. Sometimes it is between family (Cain and Able, Jacob and Esau). Other times it is members betraying the community (Achan, Annanias and Saphira). Even spiritual beings get in on the betrayals right at the beginning of Genesis all the way through the book of Revelation. Any way you look at it, the scriptures are replete with examples of brutal backstabbing.

But when I look at these stories in the bible, they somehow seem different from the ones that I have experienced in my own life. It took me a while to really understand this, but I think that it has to do with how God sees betrayal. Just take a look at Jesus’ teaching from Matthew chapter 10.

26 “But don’t be afraid of those who threaten you. For the time is coming when everything that is covered will be revealed, and all that is secret will be made known to all. 27 What I tell you now in the darkness, shout abroad when daybreak comes. What I whisper in your ear, shout from the housetops for all to hear!

28 “Don’t be afraid of those who want to kill your body; they cannot touch your soul. Fear only God, who can destroy both soul and body in hell. 29 What is the price of two sparrows—one copper coin? But not a single sparrow can fall to the ground without your Father knowing it. 30 And the very hairs on your head are all numbered. 31 So don’t be afraid; you are more valuable to God than a whole flock of sparrows.  (Matthew 10:26-31, NLT)

I find this passage especially telling about how we deal with betrayal because of the way that Jesus tells us to deal with it. Of course Jesus had plots to double cross Him happening around Him constantly. But notice how Jesus tells us how to react. He tells us not to be afraid! (vs 26) If you look carefully, this is actually one of the most common commands that Jesus gives in the scriptures.

In this verse, He is talking to His disciples and He is warning them about all of the plots that will be against them that will plague them for the rest of their lives. It also should be noted that most of the people that He is talking to will eventually be double-crossed and killed in plots against them. But He is still telling them not to worry.

Why? He gives two reasons. First, backstabbers can only kill your body, not your soul. And second, God knows our hearts and minds and He also knows the minds and hearts of the backstabbers.

Think about Judas. I think that He must have not really believed in God when it really came down to it. Now, he may have just suffered from some serious temporary amnesia, but the scriptures tell us that Jesus knew Judas would betray him and He even knew that Judas stole money from the group (John 12:6).  So my question is, how can you think that you are going to get away with stealing and lying to a God who can read your mind? I don’t think you can. I think that when we lie, we temporarily forget about God, we intentionally ignore Him or we just simply don’t believe in Him at all. I know that for me, it was when I really started to understand and believe in God, when I began to become a truth-teller.

Jesus is telling His disciples here that they can relax, because God knows everything. God is aware of every plot against us just like He knows every hair on our head. When we remember this, it is much easier to see betrayal in its real context. Ultimately, Jesus is telling us that attacks are going to come, but that we have the God of the universe in our corner. Jesus is saying that we don’t have to worry because God is ultimately in control.

I don’t know about you, but for me, that is the greatest news of all.

1) Tonight we learned that Negan knows about both Simon and Dwight’s betrayal. Do you think that there are other betrayals going on against Negan that we don’t know about yet? If so, who do you think is doing it and what do you think they are up to?

3) Do you think that Negan would have figured out Dwight’s plan without Laura showing up? Why or why not?

4) Have you ever been betrayed by someone? If so, what did it feel like?

5) Have you ever betrayed someone? If so, what did it feel like?

6) If you answered yes to either question 4 or 5, what did it do to your relationship with the person involved?

7) Do you think that Jesus knew and understood the plots around Him? Why or why not?

9) How can we prepare for the inevitability of betrayal by others, but still love our neighbor?

10) Do you believe that God is stronger than any opponent that you will meet? If so, what does that mean when we are betrayed?