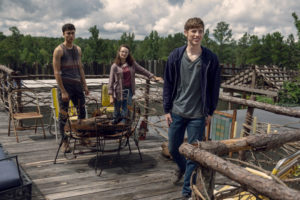 Have you ever noticed that there are some things about teenagers that seem to be universal? We spend a lot of time talking about all of the things that are changing for teenagers, but sometimes we forget to notice the things that stay the same.

About a month ago, my wife and I were in Israel and Jordan, and one of the things that we noticed was how similar the teens were to our teens back home. It didn’t matter whether they were Palestinian or Israeli, they still rolled their eyes when their parents told them to do something. Or they still sighed in disbelief when someone would say something that they thought was stupid or uncool.

Or last summer, when we were in Africa, we noticed that the teens now had smartphones (something that hadn’t been true when I had been there just two years before).  So they looked a lot more like our teens here in the states.  But when we really thought about it, they still were just teens. When we engaged with teens without adults around, they clearly were under the impression that adults were kind of dumb – just like our teens at home.  And this was the case before and after smartphones.

Just next week, my son is going to turn 13, and while he is a very bright and compassionate kid, it is still hard to watch him navigate this stage in his life.  My wife and I joke about the fact that he is slowly starting to realize that he knows everything!

I am not bashing teens here.  This is something that has probably been true since the beginning of time. Teen years are hard for all kinds of reasons.  If it is not for the raging hormones, their changing bodies and their uncanny ability to overdramatize almost everything, teenagers also tend to act out.  They also tend to test the boundaries (assuming they have them) that are given to them by adults. And of course, teens must go through some degree of this process.  They are bridging childhood where they have been greatly dependent on others for structure, rules and guidelines, to increasing independence which will ultimately lead them into adulthood where they are fully responsible for their choices and actions.

But as my parents could testify (about me and my brother Jonathan), we went through that exact phase too. And we acted out just like every other generation.

Tonight on The Walking Dead, we finally got to see this idea explored in a way that the show hasn’t really explored before.  Last week, we saw that Henry, now a teenager after the six-year time jump, is moving to Hilltop to become an apprentice to the blacksmith.  Carol and Ezekiel are done raising him and they are sending him away for the first time in his life.  This is just like the moment my parents had to go through when I went away to college.  It is also something that I will be going through as a parent in about six years.

But now that Henry is on his own in a new place with new people, he meets some new teenagers named Gabe, Addy and Rodney. And they have clearly noticed his arrival.

Gage: Hey, Huckleberry! We gotta cheer you up, man, you’re depressing the h*ll out of us. Hey, I’m Gage.

Gage: Yeah. Yeah, I remember. You were here during the war. The kid with the stick.

Gage: And this is Rodney.

Gage: So, we’ve been watching you mope around down there. Addy here’s seriously worried about you.

Addy: I never said …Are you all right?

Gage: I don’t, actually. I’ve lived here more than half my life.

Addy: Same here. How’s that for sad? At least you get to go someplace new.

Rodney: Have you ever been to Oceanside? Is it really all women?

Rodney: D*mn. I should become a fisherman.

Gage: [LAUGHTER] Hey, you should hang out with us tonight. Yeah, we’ve got a place in the woods. We could show you what passes for fun around here.

Henry: Out in the woods? Don’t they shut the gates down at sundown?

Gage: [SCOFFS] You’re telling me you’ve never snuck out of Kingdom? Dude, come on. Look, whatever’s got you down, it’s not worth it, all right? You just got to keep moving forward. Life’s too short.

Henry decides to go with them and finds himself in the clichéd teen peer pressure situation – zombie apocalypse style. Yes, they snuck out of their houses at night. Yes, there is drinking involved. But capturing a walker and playing darts and ring toss with his head is clearly their invention. But there is no surprise here, they are making all kinds of bad choices that could get them in all kinds of trouble, even the lethal kind. They are acting like many teenagers tend to act no matter when or where they are.

Fortunately, in this case no one gets killed.  But Henry does end up in jail for “drunk and disorderly” charges. Hopefully he will think twice about doing these types of things in the future and learn from his mistakes.  That is what we hope for all teenagers who make bad decisions.

And let’s face it.  Many of us did very similar things when we were teens.  I can’t say that I never snuck out of my parent’s house at night (neither can Jonathan).  I can’t say that when I went to college that I didn’t find myself in situations where there was a lot of alcohol.  I made plenty of bad decisions when I was a teen, and fortunately I survived them.

As a parent and a pastor, I hope that I can use some of my bad choices as teaching tools for my kids and their friends.  But I am not naïve enough to think that my persuasive speeches (I say very sarcastically) are going to be enough to help my kids make perfect decisions all of the time.

One of my favorite parenting verses is in the book of Psalms. This Psalm gives excellent advice for every parent.  It starts by asking a question, and then it gives a fantastic answer.

9 How can a young person stay on the path of purity? By living according to your word. Psalm 119:9 (NIV)

The question is about purity.  The Psalmist here is asking about how young people can achieve purity.  It is not a stupid question.  It is also not the type of question that is contained in one time-period or in one context. The question is a universal one that Bible believing parents have been asking for millennium.  How do we guide our kids toward purity?

The psalmist’s answer is as relevant as ever. The psalmist says that we need to live according to the word.  This is why my wife and I have endeavored to bring up our kids with the scriptures.

We do this in several ways.  First, we open the scriptures regularly. Just this morning, before the kids went to school, we read a section of the book of John together and discussed it.  We are trying to do this every day before they go to school. We believe that this is an important way for them to start the day. Second, we discuss every situation that our kids encounter through the lens of the scriptures.  If my daughter has a conflict with kids at school, we might find ourselves opening Romans 12 and discussing what that means in her life. Or when my son is struggling with some negative feelings like hate or desire for revenge, we open relevant scriptures.   But most importantly, my wife and I try really hard to explain why we make the decisions that we make in light of the scriptures.  When we make big decisions, we say why we made that decision, and then we explain what the Bible has to say about this.