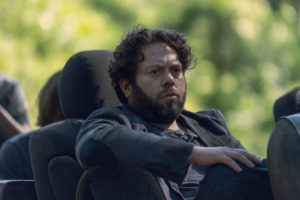 Why do humans spend time creating art and then sharing it with each other? There is no real practical reason for this. It doesn’t help us find shelter, food, water or any of the things that we need to survive. It also doesn’t provide any of the things that we need to continue our species. But every civilization, whether in war or in peace does this. You can find art and music in virtually every culture in every civilization in all of recorded history.

If you look at our culture, the creation of art and music are usually things we do in our spare time. But a select few individuals are paid to make or teach art. And in some cases, people are paid extremely well to make art or music. Just look at those who work in theatre, film or the music industry. These talented few are usually highly overpaid, because audiences don’t seem to mind paying large amounts of money to attend their concerts, plays or films.

But even though most of us don’t create art full time, we certainly partake in communities that appreciate, discuss and even recreate it.

When I was a kid, I could hardly wait to show up to school on Monday morning to discuss the matinee film I saw on Saturday.  In my school, people even grouped themselves partly by the types of media we consumed (punks, headbangers, M.C.s, breakdancers, film geeks, theater geeks, band geeks, Dungeons & Dragons players, gamers etc.)  Incidentally, this column is an example of that.  Here we are writing about how a television show inspires thought or discussion about the gospel.

But on The Walking Dead, we really haven’t had much of an opportunity to talk about this until now. Perhaps The Walking Dead world has been a little too chaotic to partake in the creation and sharing of art.  But eventually, every culture does – even in a zombie apocalypse.

At Hilltop, we see that people are starting to listen to records now.  Who knew that band The Jesus and Mary Chain would survive an apocalypse. But that is the funny thing about art. You never know what will be appreciated in the future. Emily Dickenson clearly never knew that the poems she wrote and hid all over her house would be taught in virtually every high school classroom in the U.S.  And I’m sure that Shakespeare would be surprised that his plays about local politics and celebrities would be studied and performed over 400 years later.

But this is certainly how we were made as humans. And this isn’t lost on a new character on the show named Luke. He is part of this new group that Michonne is taking to Hilltop, when she accidently destroys his violin.

Yumiko: Circa 1725. He found it in a mansion outside of Philadelphia before it was overrun by sickos. [SIGHS] In the kid’s room, of all places.

Siddiq: [CHUCKLES] – What? Oh, so you’ve been traveling with a collection of instruments all this time? Why?

Luke: Look, for a very long time, historians and archeologists have wondered how did ancient humans survive the Neanderthals? Okay? How did we defeat them when they were bigger and they were smarter and they were stronger, faster? They had better tools than us. So why are we still here and they’re not? [INHALES SHARPLY] And then they found a cave.Okay? And in that cave, they found a 40,000-year-old flute.

Luke: Yes. A flute. [CHUCKLING] Yeah. And then they realized that maybe ancient humans didn’t defeat Neanderthal. Not in the way that we think of the word “defeat,” okay? They came together as an answer to defeat. They sat around a campfire. They shared their stories with each other in the form of music.

And paintings. And, and they created a a common identity. And then they, you know, they they built communities, and they grew. And, and then, as they grew, Neanderthal retreated, and then, after a while, they just died out. So this, yeah. This. This. This is the one thing that separates us from the animals. For better or for worse, it brings us together. And if we’re trying to rebuild something, you can’t ignore that.

Michonne: After everything you’ve seen and done, you still believe that’s all it’ll take?

Luke: Yeah. It’s survival of the fittest. Sharing with each other that’s part of what makes us stronger.

While it is debatable whether this is something that has helped humans as a species survive, I really liked the statement, “sharing with each other (is) part of what makes us stronger.” I believe that this is true for all humans and especially those who are followers of Jesus.

An unchurched uncle of my wife’s visited our church and joked with my afterwards, saying, “You Christians sure do like your music.” It isn’t something I had thought about much, but as Christians, we weekly tend to get together and read Psalms, tell stories (from our lives and the Bible) and sing together. We seem to care about sharing art and artistic expression as an act of worship. But this isn’t just a twenty-first century phenomenon. This is something that believers have done since the beginning of the history of our faith. The earliest believers would share stories around the campfire that would eventually become the writings that we call the Bible.  The Bible itself even records this and recommends this. Most of Paul’s letters contain these types of descriptions of the earliest Christian communities.

15 Let the peace of Christ rule in your hearts, since as members of one body you were called to peace. And be thankful. 16 Let the message of Christ dwell among you richly as you teach and admonish one another with all wisdom through psalms, hymns, and songs from the Spirit, singing to God with gratitude in your hearts. 17 And whatever you do, whether in word or deed, do it all in the name of the Lord Jesus, giving thanks to God the Father through him. Colossions 3:15-17 (NIV)

This verse in a letter to a church in the ancient world describing Christians using poetry and music as a way of worshipping God and creating community. I actually believe that this is part of how we connect with the creator of the universe – by being creative. This is probably part of what it means that we were created in God’s image.  We have a desire to create, perhaps because we were created by a God who is in His very nature, a creator.

Luke (the character on the show) may actually be on to something here. Perhaps, the sharing of stories, poems and music are some of the very things that make us human.  Maybe these are the things that we have inherited from our creator, in whose image we were made.