Season 9, Episode 5, What Comes After 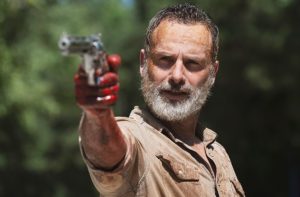 We’ve all heard the phrase, ‘Blood is thicker than water,’ as a reference to family and its importance. But what is family?

Is it only those in our lives related to us by blood? Or step out further than that – by marriage? Can family exist beyond these bloodlines or marital ties?

I’ve known many people in my life who aren’t close to any “blood” relatives, and whose marriages have ended in breakup or serious dysfunction. I’ve also known people whose loyalties to their “family” have been disrupted and shattered by sexual and physical abuse. What did family mean to my friend’s dad who lost his entire blood family in the Holocaust and was adopted by a loving set of strangers? Or my friend in Africa who is raising a girl as his own daughter whose biological parents died of AIDS? Intuitively, we can all accept that family goes beyond the bounds of blood ties and marriage, and if it didn’t, there sure would be a lot of people without “family.”

In tonight’s episode of The Walking Dead, we had an opportunity to see Rick came around to a new definition of family that is hopeful and true.

Human beings are innately social creatures, and so the concept of “family” inevitably becomes more nuanced than just those who are related by blood. When it comes down to it, family are the ones in our lives who we can count on, to celebrate with us the joys of life, but also stand by us in times of sorrow and heartache. And let’s face it, not all of those people are related to us by blood or marriage.

The theme of ‘family’ has been a big one for Rick Grimes on The Walking Dead. He spent the first half of season one searching for his wife and son. When he finally found them, his wife was already with another man… his best friend and partner!  She then became pregnant, and we still wonder whether her baby was Shane’s or Rick’s own. Long after Shane was gone, Rick found new family in his new group. Many would die, and some would even join his immediate family to help raise his (or Shane’s) daughter Judith. Currently on the show, Michonne is the one who takes care of her and calls Judith her own daughter. She even referred to Rick’s recently deceased son Carl as her son during last week’s episode. Clearly family is not defined as just blood relatives on this show.

In addition, those who were part of Rick’s family, but died along the way reappeared in Rick’s dreams tonight. It was great to see Shane again (even though he pointed out that Judith is probably his). It was also great to hear Abraham, and see Sasha and Hershel once more (sadly that will be the last time for Hershel because actor Scott Wilson recently passed away).

Clearly, all of these people were family to Rick, but he seems to be a little confused about this point. In each of his dreams, he is asking the big question, “Where is my family?” And until he sees Michonne, he doesn’t really seem to know the answer. He is wounded and we don’t know whether Michonne is a vision or reality, but the question of family comes up.

Michonne: Rick! It’s okay. We’re gonna get you out of here, okay?

Rick: No, you take care of them.

Michonne: It’s not over. We don’t die. You wanna know why I fell in love with you? Because you’re a fighter, and you never give up. So fight, Rick. Fight for me. Fight for all of us.

Michonne: I found you.

Rick: You did. But this This isn’t real.

Michonne: Yes, it is. Now wake up.

When Michonne says, “wake up,” we realize that this is another dream, but Rick figures out the most important answer to his quest during this vision. He realizes that he does indeed have family, even if none of them are related to him in the more traditional sense.

Unfortunately for this show, this is the last we will see of Rick Grimes. According to Scott Gimple, Rick is off to whole new adventures away from his “family” in some AMC produced feature films. I have to admit that I am very excited about that and can’t wait to see where that helicopter will take him. But, while I am sad about his departure from the show, I am also happy that he finally figured out who his family really was during this episode.

Apostle Paul, the writer of most of the books in the New Testament writes volumes on the issue of family. In his historical context, many people were forcefully removed from their families due to war or slavery. In addition, many of the early Christians were shunned by their relatives (and in some cases, even killed) for becoming followers of Christ. Others became Christians while married to non-believers or while living in households that didn’t follow Christ. Paul, one of the earliest leaders in the Christian church, had to help people understand what family meant in this new Christian context. In his letters to the church in the Greek city of Corinth, Paul had to deal will all kinds of family issues. In the first letter to Corinth he wrote about a guy who was having an incestuous relationship with his mom and was joking about it (Paul’s advice to the church was to not associate with this man). He also wrote about the issue of those who became Christians while they were married to non-believers (his advice was to stay married to them, but to let the non-believing partner leave if they needed to). In his second letter to the church in Corinth, Paul had to deal with the issue of those who wanted to marry an unbeliever (his advice was to not do it). But then in the same chapter (chapter 6) of this letter, he explained why he was instructing them this way while quoting verses from the Old Testament.

For we are the temple of the living God. As God has said:

“I will live with them
and walk among them,
and I will be their God,
and they will be my people.”

“Come out from them
and be separate,
says the Lord.
Touch no unclean thing,
and I will receive you.”

Now these quotes from the Old Testament do not come from just one place.  Some scholars say that Paul may have quoted from 7 to 9 different Old Testament verses here. But, what Paul did was to mash them up in a similar way that a DJ mashes up Michael Jackson and Twenty One Pilots at a homecoming dance. He combined verses that weren’t written together into one quote in order to emphasize a huge point that is made constantly in the Old Testament.

Paul’s point was exactly what Jesus pointed out to his disciples at Caesarea Phillipi in Matthew 16. He was saying that, for Christians, the temple is now in our hearts. We no longer need to annually trek to Jerusalem in order to make temple sacrifices to worship God. Now the sacrifice has already been made for us on the cross.

Paul said that “we are the temple of the living God” (v 16). And then he quoted all of these important Old Testament verses to illustrate what that means. It means that God walks among us and lives with us (v 16). It also means that we are to live according to His righteousness and live a righteous life (v 17). And most importantly, He says “I will be a Father to you, and you will be my sons and daughters.” (v 18) This quote is most likely from 2 Samuel 7, when God promises that God will treat David’s son, God’s adopted son, as His son. He is promising that God will treat this boy as family.

But Paul did something interesting with this verse. He actually changed the text and said, “you will be my sons and daughters (v 18)”. This is not some modern translator adding inclusive language. This is actually in Paul’s written Greek text. Paul is using this (among other) Old Testament texts to say that part of being a Christian is that all of us (men and women, Jew and gentile, slave and free) are part of the family of God.

What Paul is saying here, is that when we become a Christian, we become a part of a whole new family. The search for family is now over. We now have a family in Christ. I don’t know about you, but to me, that is some of the greatest news that we can ever receive.