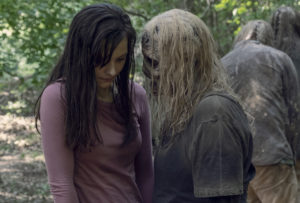 Have you ever had a friend say something to your face, that you found out later was a blatant lie. I am not talking about omissions (which are also lies). I am talking about when person intentionally tries to deceive you. What does that do to the relationship?

This question of what lies can do to relationships is explored almost every week on The Walking Dead. Sometimes characters on the show seem to believe that lies can make a situation better because some truths need to be hidden. Other characters are so honest that people don’t tell them anything for fear of certain information getting out.

But this week, we saw an entirely new take on lying and deception. Now that Lydia is back with the Whisperers, she is clearly conflicted. We don’t know exactly what she is thinking, but we do know that she has withheld some information from Alpha. Henry followed her and has been captured by the Whisperers, and Lydia hasn’t entirely been honest about her relationship with him. Alpha seems to suspect this, so she has a talk with Lydia while they are walking in through the neighboring fields.

Alpha: Know why your friend decided to follow you?

Lydia: He’s not my friend. He was in the cell next to mine. All I know is his name. Henry.

Lydia: He didn’t seem worth mentioning.

Alpha: He thought it was worth risking his life chasing after you.

Lydia: I acted helpless, and he fell for it. Guess he’s dumber than I thought.

Alpha: Don’t sell yourself short. Maybe you’re just a good liar. Know why I trust animals? Because they don’t lie. You had to lie. So did they. It’s what they do. They’re just words. Air. Nothing more. Remember that.

Alpha seems to be saying that all humans are intrinsically untrustworthy. It is as if it is our nature. But that isn’t what caught my attention. The thing that I found most interesting was the idea that lies were “just words.” Or even more interesting, when she called lies “air.”

What Alpha is implying, is that lies don’t actually matter. She is saying that because all humans do it, we should not be surprised when people lie. But the scary part is that she is saying that lies should come as natural as breathing.

Now the irony is that Lydia is clearly lying to Alpha about what she saw while she was in the jail cell next to Henry. And I am sure that Alpha wouldn’t consider those lies to be “air.” But her philosophy is truly terrifying.

The idea of lies being like “breathing” reminds me of one of my favorite proverbs in the bible. In chapter fourteen of proverbs, Solomon says something similar about lies.

5 An honest witness does not lie;a false witness breathes lies.

To the “false witness” lies are just “air.” They breathe them in and out like any other breath. I don’t know about you, but I have met people like this. I also have to admit that there were times in my life where this was true about me.

Lying is something that you can get so used to that it actually does become like breathing. This is partially due to the fact that when you lie once, you usually have to lie many more times just to support that first lie. And then you have to lie many more times to support the subsequent lies. And the cycle becomes so regular that lies just seem to come out as easily as one breathes.

But most of us know that lies are extremely destructive (it also explains why many people are closer to their pets than they are to many people). Lies destroy relationships and, despite what Alpha thinks, humans need relationships.

The other factor that many Christians forget is the fact that God knows our hearts. This means that lying to God is impossible, and so every time we think that we get away with a lie – we don’t. God knows our every thought.

In John 14:6, Jesus says “I am the way and the truth and the life (NIV).”  I find it interesting that Jesus actually identifies Himself as “the truth.”  This is one of the most foundational parts of who God is. We can trust Him. And this is also, the way that God intends for us to be. He wants us to be the kind of people who are trustworthy to both God and our neighbors.

Thom McKee Jr. is a husband, father, pastor… and film geek (and brother of Jonathan McKee). Thom lives in Northern California with his wife and two kids