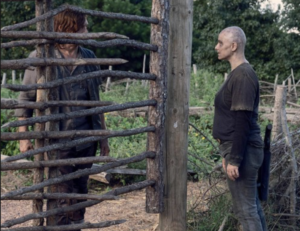 Are there things that you have done that you just couldn’t live with? Maybe you stood by and watched while someone was hurt in front of you.  Or maybe you actually hurt someone and you can’t get it out of your mind.

In my life, I know that there are plenty of these things.  But if I lived in the universe of The Walking Dead, the answer might be a little different. When danger lurks in every corner, and people aren’t always what they seem to be, you might have to make some more difficult choices than most of us have to do in our real lives. And let’s face it, probably none of us have to decide whether to trade the lives of a young abused girl in exchange for the lives of our friends.

But this is the decision that falls on Daryl this week when it comes to the whisperer, Lydia, whom they captured and are holding in their jail cell. Alpha, Lydia’s mom, wants her back and she is willing to trade the lives of two of our newcomers for her. But Daryl and Henry have taken a bit of a liking to her and know that sending her home means even more abuse and possibly death for the teen.

So they decide to trade her, but the decision doesn’t sit easy with them. Later Daryl and Henry talk about it.

Daryl: We live with it.

Henry: Yeah. That’s what Enid said. I saw the scars on your back. I think you know better than anyone what we just sent her back to. How can you live with that?

Daryl: Look the world is just sh*t sometimes. And you live with it. Sometimes that’s all you can do.

Henry: Yeah, but what about before? At Alexandria? I know what you did to help when things went bad there.

But at the end of the episode, Daryl changes his mind and starts to head out to look for Lydia. As he is heading out, he sees Connie sitting at a table with her notepad that she uses to communicate with those who don’t speak sign.

She writes, “Where are you going”?

Daryl takes her pad and scribbles, “I couldn’t live with it. Left to find Lydia”.

Connie takes back the notebook and writes, “I’m, going with you”.

Daryl says, “no”. But Connie then points to her note indicating that she is going with him.

She then scribbles,” I can’t live with it either”.

We know that Connie isn’t the type to just stand by and we see it first-hand this week when she runs out to rescue the baby that Alpha seems perfectly fine with sacrificing. After Connie’s example, others follow her lead and rescue them in that fantastic sequence in the cornfield.

I don’t know about you, but I grew pretty uncomfortable with the thought that we were actually going to see walkers eat a baby this week. And let’s face it, if it wasn’t for Connie we probably would have.

There is no question that people have been facing decisions like this since season one. Do you rescue someone, even if others may be killed in the process? And more importantly, if you don’t rescue someone in peril, can you live with it?

This is the reason that I love this show so much. It makes you ask questions about your own moral understanding and whether you would take risks for others.

As a Christian, I think that these questions are more relevant than ever. Are there things that I can do that I just can’t live with?

One of my favorite examples of this comes in the book of Exodus at the beginning of the story of Moses. Moses has been raised in the palace of Pharaoh, presumably in a life of luxury. But very few people in his life know that he is actually a Hebrew (the people who are forced to do back breaking slave labor for their king). But, we get a glimpse into how Moses thinks when he has to make a choice about how to deal with seeing the oppression of his people.

11 Many years later, when Moses had grown up, he went out to visit his own people, the Hebrews, and he saw how hard they were forced to work. During his visit, he saw an Egyptian beating one of his fellow Hebrews. 12 After looking in all directions to make sure no one was watching, Moses killed the Egyptian and hid the body in the sand.

13 The next day, when Moses went out to visit his people again, he saw two Hebrew men fighting. “Why are you beating up your friend?” Moses said to the one who had started the fight.

14 The man replied, “Who appointed you to be our prince and judge? Are you going to kill me as you killed that Egyptian yesterday?”

Then Moses was afraid, thinking, “Everyone knows what I did.” 15 And sure enough, Pharaoh heard what had happened, and he tried to kill Moses. But Moses fled from Pharaoh and went to live in the land of Midian.  Exodus 2:11-15 (NLT)

Moses clearly couldn’t live with seeing his people tortured and beaten. Even though he must have known that he could be risking everything he has and owns, he can’t resist jumping in, when one of his people are oppressed.

Now, killing the Egyptian may have not been the perfect response, but it results in a pretty bad scenario for Moses – banishment from Egypt. Basically all of the people that he grew up with, and all of the possessions that he acquired while growing up in luxury were gone because of his refusal to help out his fellow Hebrews.

I see this as a moment where Moses figures out who he really is for the first time in his life. I am sure that it would have been very easy to not do anything, but he makes a decision that would literally define his future.

Moses would go on to lead his people out of slavery and become what the Rabbi’s would call “the great legislator”.  He would literally be the one who gives the people of God the bible – the Torah.

But my guess is that this probably wouldn’t have happened if Moses had just chosen to live with the oppression of the Hebrews.

Often in my life I have to make decisions where I may suffer consequences if I step out and help someone.  Maybe it happens when someone is being bullied or mistreated. Sometimes it is when a friend or even a fellow Christian starts to gossip about someone else.  Sometimes the gossip may even be true, but I believe that part of being a believer is the understanding that we need to show mercy to the broken and bruised. In the book of Matthew (22:35-40), Jesus even says that loving your neighbor is one of the greatest commandments. But most importantly, Jesus tells them that they can’t just pick and choose those whom they like and call them their neighbor.  Everyone is their neighbor, even the outsiders and people that they despise.

I have learned that, when others are abused, I can’t just stand by and watch. We can’t be a bystander. It is just something that I can’t live with.