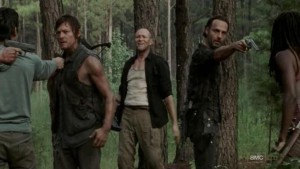 Blood is thicker than water… so they say.

That is the tension in this episode. Family, or values—which is it? Daryl is caught in the middle of a dilemma, feeling the need to make a choice between his brother Merle, with his questionable ethics, and his new group of friends.

As Season 3 continues to unfold, our perception of the Governor is probably beginning to cement. Even Merle is probably wondering at this point, “Why was I following this guy?” But luckily for Merle, Daryl’s new friends had his back, and after a small skirmish, the brothers were freed.

The key discussion begins about 11:50ish:

Daryl: Look, the Governor is probably on the way to the prison right now. Merle knows how he thinks and we could use the muscle.

Maggie: I’m not having him at the prison.

Glenn: He had a gun to our heads. Do you really want him sleeping in the same cell block as Carol or Beth?

Daryl: He ain’t a rapist.

Glenn: Well, his buddy is.

Daryl: They ain’t buddies no more. Not after last night.

Rick: There’s no way Merle’s gonna live there without putting everyone at each other’s throats.

Daryl: So you’re gonna cut Merle loose and bring the last samurai home with us? (They dialogue a bit about Michonne) We don’t know who she is. But Merle, Merle’s blood.

Glenn: No, Merle is your blood. My blood, my family is standing right here and waiting for us back at the prison.

Rick: And you’re part of that family. But he’s not. He’s not.

Glenn: That’s not what I was saying.

Maggie: Daryl, you don’t have to do that.

Daryl: It was always Merle and I before this.

Glenn: You serious? You’re just gonna leave like that?

Daryl: You’d do the same thing.