Season 3, Episode 4, The Killer Within 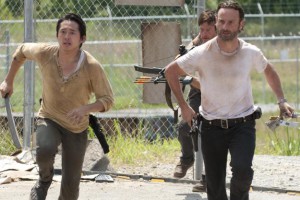 This episode, deemed as a favorite for many fans, had its share of joy and sorrow. Hershel emerged for the first time since his amputation, drawing a smile from the group. A new baby is born.

But death is lurking around every corner, and that always creates tough choices.

The group still doesn’t know what to do with the prisoners. T-dog floats towards extending grace and mercy.

Rick: We’ll give the prisoners a week’s worth of supplies for the road.

T-Dog: Did they really have one?

Rick: Hey, whose blood would you rather have on your hands? Glenn’s? Maggie’s? Or theirs?

But chaos breaks out before a final decision is made, and before the episode finishes, we’ve lost two lead characters, each of them choosing to sacrifice themselves to save others.

Lori sacrifices herself to save her child. Who wouldn’t? Admirable nonetheless.

T-Dog gives his life for Carol. The pivotal scene was about 21 minutes into the episode:

T-Dog: Why? Sit here and wait to die?

Carol: I’ll do what I have to. You’re not becoming one of those things.

T-Dog: This is God’s plan. He’ll take care of me. Always has. He’s gonna help me lead you out of these tunnels.

This is the last episode for both Lori and T-dog.

T-Dog’s sacrifice is the example of the unconditional love that is ultimately shown in Jesus’ sacrifice for us.