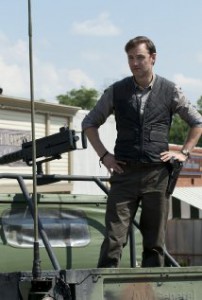 When I was a kid one of my favorite movies was Raiders of the Lost Ark. Hitler went on a quest for more power, even to the point of seeking “divine power.” Of course, he and his Nazi followers followed misguided notions thinking that the ark was some remote control to God’s power. They were gravely mistaken.

In the third film the Nazi’s sought more divine power, this time, eternal life. You’d think they would have learned from the ark incident, but no. The cup didn’t offer some magic form of eternal life, only death.

Power-hungry leaders always seem to fall in the same suit: narcissistic, sociopathic, and an obsession to wrestle with their own mortality. The Governor is three for three in these categories.

Once again, we’re learning that the most heinous rivals in the world of the walking dead is not the dead… but the living. The Governor is far scarier than any decaying corpse, but his evil is cloaked under the guise of a leader—a leader who lies to his people, kills for personal gain, and then revels over his collection of trophies from his kills.

Michonne seems to see right through him.

But it doesn’t matter how many the Governor kills, because when it comes bedtime and he’s staring at his trophies by himself, he knows his life could be cut short any day. Mortality is one battle he’s never conquered, although he seems to have set Milton to the task to discover if there is any smattering of personality or memory left in the walking dead. Or is life as we know it truly over?

We caught a glimpse of this reasoning during the dinner scene at 28 minutes and change into the episode:

Milton: Do you think they remember anything? The person they once were?

Andrea: I don’t think about it

Sure, we don’t live in a world where the dead walk the earth, but have you ever wondered if there is more to this life?

Have you ever let the temporary pleasures around you distract you from what’s important?

The living at least know they will die, but the dead know nothing. They have no further reward, nor are they remembered. Whatever they did in their lifetime—loving, hating, envying—is all long gone. They no longer play a part in anything here on earth. (Ecclesiastes 9:5-6, NLT)