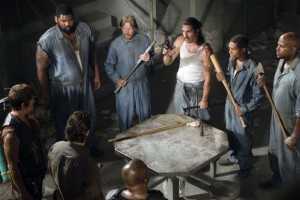 I heard it said that people are like tea bags. Put them in hot water and you’ll see what they’re made of.

What do you revert to when you face hardships?

This week we got a peek into the deep fractures in the armor of human nature as the conquest of the prison continues. The prison is clearly a fortress worth fighting for… but at what cost?

As Rick and the others move room to room to clear out the prison, creating a safe place, the situation has become more complicated. The presence of the existing group of prisoners is truly a wrench in the works—inconvenient to say the least. Hence the moral dilemma. Do you let these existing residents stay? What if they’re dangerous? (Didn’t early American settlers perceive native Americans as dangerous? Or were they just inconvenient? Yeah… I just went there.)

But what if these prisoners posed a threat to the group, Tomas, for example? How do you deal with perceived threats like him?

We saw how Rick handled him:

Tomas: It was coming at me, bro.

Rick: Yeah, yeah. I get it. S**t happens. (Rick embeds the machete in his skull)

Even if you agreed with Rick’s actions toward Tomas, did that make the other prisoners guilty by association? Is the mere fact that they were incarcerated enough to make them untrustworthy? Or does each person have an individual right to hear his or her case pleaded?

Axel: Sir, please, listen to me! It was them that was bad. It wasn’t us.

Axel: You saw what he did to Tiny. He was my friend. Please. We ain’t like that. I like my pharmaceuticals, but I’m no killer. Oscar here. He’s a B&E, and he ain’t very good at it either. We ain’t the violent kind. They were! Please. I swear to God! I wanna live!

Rick: (to Oscar) What about you?

Oscar: I ain’t ever pleaded for my life, and I ain’t about to start now. So do what you gotta do.

Rick leads them to another cell block. Dead bodies stretch across the floor.

Axel: (looking around at the bodies) Oh man. I know these guys—they were good men.

Oscar: So you’re just gonna leave us in here? Man! This is sick!

Rick: We’re locking down the cell block. From now on, this part of the prison is yours. Take it or leave it. That was the deal.

Daryl: You think this is sick? You don’t wanna know what’s outside.

Rick: Consider yourself the lucky ones.

Daryl: Sorry about your friends, man.

SEASON 3, EPISODE 2 DISCUSSION QUESTIONS:
1. Rick hasn’t killed a lot of the “living” so far in this series. Why do you think he killed Tomas?
2. Was he right? Explain.
3. What would you have done with the other prisoners?
4. Did you sense a different feeling from Daryl than Rick towards the prisoners?
5. What authority do we depend on when no authority exists?

In those days Israel had no king; all the people did whatever seemed right in their own eyes. (Judges 21:25, NLT)

6. What authority do most people revert to when chaos ensues?
7. What verdict did Rick eventually choose for the remaining prisoners?
8. Why do you think Rick chose mercy?
9. Was he right? Explain.

Without the foundation of a God-given authority, human nature often reverts to a savage state… survival of the fittest. Winner takes all!

God has offered us something so much better: Mercy. Grace.

God blesses those who are merciful, for they will be shown mercy. (Matthew 5:7, NLT)

Rick was able to find a merciful solution that didn’t endanger his group. Inconvenient? Yes. But mercy won.