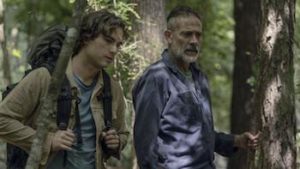 Every parent has that moment when they have to explain to their children where they came from. If you are not a parent, you might remember when it happened to you. This is the moment when you explain some parts of your past that are very different from your children’s present.

Just this last year, my wife’s grandfather passed away. He was a fascinating man who had been a pilot in World War II and he flew in Viet Nam. He was one of the few pilots who went from prop planes to Jets.  And consequently, he had so many amazing stories about his time as an Air Force pilot.  So when he passed away, I felt like so many stories passed with him. And those stories gave me a window into a world that was so foreign from my own experiences. But the ones he told me, I will tell my kids.

With my kids, I usually tell them stories about how I came to know Jesus. So I especially like to highlight for them how the things that I experienced growing up affected me and made me who I am today.

Tonight on The Walking Dead, Negan has a chance to reflect on where he came from. He has escaped from his cell and he is wandering around in the woods when he comes across a teen whose dad used to be a savior. His name is Brandon and he has heard stories from his dad about the brutality and the craziness of that period.  He also is very keen to rebuild what has been lost and he is excited to help Negan do that.

But Negan doesn’t seem very interested in reliving that past.  When they come across a mother and teenage son who seem to not be doing well, Negan takes a bigger interest in them and asks Brandon to get lost. Brandon doesn’t take this so well, but leaves anyway.

Negan does however seem very interested in connecting with this yound innocent teen boy.  He sees him sitting on the back of a truck playing with a toy airplane. So Negan engages with him.

Alright. Picture this, alright? Sitting on a plane, really nice, comfy seats, but it feels like you’ve been sitting on the runway for G*dd**n ever. Suddenly, there’s this kinda rumbling, a groan, alright? The plane finally starts to creep along, right, and now we’re moving faster and faster. And you look out that window, and everything’s turning into a blur.  And then, “Whew. ” Wheels come up off the ground. You are flying.

It is like voodoo magic, man, alright? Up and up and up, higher and higher, until it feels like you are floating on top of the frickin’ world. And you’re looking out that little window, and you can see houses. They look like little toy houses and little toy cars.

Oh. But the food? Unh-unh. No way. They served us something. They called it beef stroganoff. Let me tell you something. It looked like baby sh*t. And my Lucille she wouldn’t even touch it. Ah, kid, there is so much you’re gonna miss growing up in this screwed-up world.

It isn’t the most encouraging speech, but Negan clearly is more interested in reflecting on his pre-apocalypse past with his wife Lucille than he is about his time with the Saviors. Common past experiences like flying in a plane are already foreign to this next generation.

But this is all cut short when the murderous Brandon comes back and kills Negan’s new friends. It turns out that Brandon has Negan’s bat and Henry Rollins jacket with him. (Quick fun fact, Negan was actually drawn in the comics to look like punk superstar Henry Rollins) So Negan kills Brandon and puts back on his savior uniform.  But this clearly is not the past that Negan wanted to revisit. Negan may actually be more interested in being a more positive role model than he was as a savior.

But when I think about this I can’t help but think about these types of moments in the bible.  Remembering the past is not only encouraged in the bible it is commanded. Think about all of the memorials that Israel would put up to remember how God saved them.  Or how many of the rituals, like passover and communion, are commanded so that believers don’t forget where they came from.

This is probably most vividly seen in a passage from the book of Deuteronomy.  Moses wrote this just before they were about to enter the promised land after wandering in the desert for many years.

5 “Look, I now teach you these decrees and regulations just as the Lord my God commanded me, so that you may obey them in the land you are about to enter and occupy. 6 Obey them completely, and you will display your wisdom and intelligence among the surrounding nations. When they hear all these decrees, they will exclaim, ‘How wise and prudent are the people of this great nation!’ 7 For what great nation has a god as near to them as the Lord our God is near to us whenever we call on him? 8 And what great nation has decrees and regulations as righteous and fair as this body of instructions that I am giving you today?

9 “But watch out! Be careful never to forget what you yourself have seen. Do not let these memories escape from your mind as long as you live! And be sure to pass them on to your children and grandchildren. Deuteronomy 4:5-9(NLT)

Moses not only wanted them to pass on these stories to their children, he commanded them to do it. He believed that telling their children where they came from was actually an important part in raising the future generations.  God had miraculously saved their people from back-breaking labor in Egypt, eminent death at the hands of the Egyptian army at the Red Sea, starvation in the middle of the desert and constant danger from the nomadic tribes that would attack them as they traveled.  But thoughout each one of these miracles, the people of Israel would quickly forget how God saved them. So Moses put it in their law that they had no choice but to reflect on what God had done.

In the New Testament, Jesus similarly commanded his disciples to remember His work with a ritual we call communion.  Most Christian traditions still do that today.

Why?  Because it is important to remember what God has done for us.  Many of the things in our past, we are free to forget. (Especially all of the bad things that we have done) But the things that we should always remember, are the incredible ways that God has loved and guided us throughout our lives. And those are the stories that we need to share with our children… and their children… so that they will never be forgotten.

1) Negan seemed really annoyed with Brandon right when he met him.  But when Brandon threatened to kill the mother and son, why do you think that Negan didn’t kill him?

2) Do you think that savior Negan would have killed Brandon in the bus? Why or why not?

3) When Negan chose to kill Brandon after he murdered two innocent people, do you think that Negan changed?  Why or why not?

4) Do you think that Negan is a threat to the Whisperers or a friend?  Why or why not?

5) Do you have things in your past that you think you need to share with future generations?  Describe them.

6) Are there things in your past that you do not want to share with future generations? Why or why not?

7) Why do you think Moses commanded (not suggested) Israel to remember what God had done for them?

8) Why do you think Jesus commanded us to remember what He did for us on the cross?

9) Is that something you will do with your children? Why or why not?