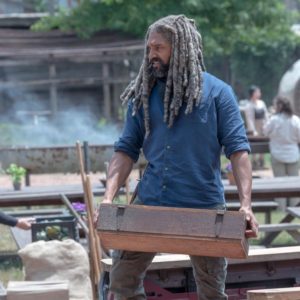 Tonight on the Walkind Dead, we realize that some people in the zombie apocalypse have good memories of the not so distant past.  Most of our characters’ memories are full of pain and loss. But in the case of Ezekiel, this is just not the case.

Ezekiel used to be a zookeeper, but when the dead started walking, he became a king.  He really had everything when we first met him.  He was a respected leader. He was a man who could motivate his people with dynamic speeches (remember “and yet I smile”?). He had loyal subjects like Jerry.  He had Carol as his girlfriend.  He had an adopted son, Henry. And don’t forget that he had a pet tiger named Shiva (who wouldn’t want a pet tiger!). It is hard to imagine a character in the show who had more.

But as usual in this show.  When you have something awesome, you just have more to lose.  And sure enough, Ezekiel eventually lost most of the best things that he had.

He no longer has Shiva or Carol.  His relationships with his subjects just aren’t the same that they used to be. His son Henry was killed by the whisperers. And now, he just seems to be depressed and unable to motivate anyone, including himself.

So when you remind Ezekiel of his past, he is mostly just sad about all of the things that he has lost.

Tonight, Michonne seems to notice this as he is riding his horse in the woods by himself.  She tries to engage him and he just misinterprets this by trying to kiss her.  There was clearly no magic there. So he explains his behavior to her.

Ezekiel: I lost my Kingdom. I had a reign, and what did I do with it? I failed. Benjamin, Shiva, Henry, then the Kingdom, now Hilltop. And Carol. I don’t even know how to talk to her anymore.

Michonne: I didn’t know what I was gonna do when I came out here. I’ve been here before. Not here (points to herself) but here (points to him). A long time ago, when I was on my own, I was in a dark place. And I started to envy walkers. Every time I ran into one, I’d tell myself, “I’m gonna let it bite me. ” Next thing I know, my sword was chopping off its head like it has a d*mn mind of its own. So I put the sword down, kill ’em with my own bare hands. Eventually I just gave up.

Michonne: It feels like a mask until it doesn’t.

Ezekiel: My old mask saved my life. But I could only wear it for so long.

Michonne: Mm. Just like that, you lose it all, all over again.

Michonne: And somehow it’s harder the second time around especially when you get used to having someone there that partner in crime that sounding board that walk. Now it’s all on you just you.

Ezekiel: Yet I smile.

Ezekiel uses his own catchphrase sarcastically, but it also reminds us of all that he has lost.  But when you think about it, most of the characters on the show, including Michonne, have lost a lot too. And like most of these characters, both Ezekiel and Michonne seem to have to live in the moment with not a lot of hope for the future.

And it is in these moments where I feel really sad for these characters.  The show is largely secular, and at times it seems like the only hope for the future for these people is the prospect of being remembered.

Don’t get me wrong, being remembered is important, but there are much better things to look forward to in our futures.

As a follwer of Jesus, I look at the fuutre much differently than most of the characters on the show.  I have a hope that after this life is done, I will spend eternity with God in paradise, and that frames how I look at anything gained or lost in this life.  And this has been the belief of Christians from the beginning.  Just look at Paul’s words in his letter to the church in Philippi.

13 Brothers and sisters, I do not consider myself yet to have taken hold of it. But one thing I do: Forgetting what is behind and straining toward what is ahead, 14 I press on toward the goal to win the prize for which God has called me heavenward in Christ Jesus. Philippians 3:12-13 (NIV)

Paul, tells us that this perspective helps us forget what is behind. If you think about it, he could be talking about the bad things in our past – our mistakes, broken relationships and loss. Or he could even be talking about the great things in our life which bring us joy.  But like with everything in this life, we will eventually lose all of those things. So what Paul is saying, is that given our future, our past really doesn’t mean much.  That is why he tells us to focus on what he calls “the prize.”

As followers of Jesus, we don’t have to be anxious about the inevitable losses we will have in our lives.  We don’t have to worry about these things, because what we have to gain is so much more.

Pauls advice is quite simple. The future of a follower of Jesus is so great, that we don’t have to worry about our past, no matter how bad or good it was. We just need to “press on toward the goal”, which according to Paul, ultimately moves us “heavenword in Christ Jesus.” And no loss can ever change or take away that hope that we have in Jesus Christ.

1) How did you react when Ezekiel kissed Michonne?

2) Do you think that he felt the same way about Michonne that he did about Carol?

3) Why do you think Michonne kissed Ezekiel back even though she doesn’t feel that way about him?  Was this a good choice?

4) Has Ezekiel really lost everything?  If not, what does he still have?

5) Does having a hope for the future change the way we view our past or present? Why or why not?

6) What prize do you think the Paul is talking about in his letter to the church in Philippi?

8) Do you feel like you might need to adjust your perspective to focus on things that are more eternal?  Why or why not?