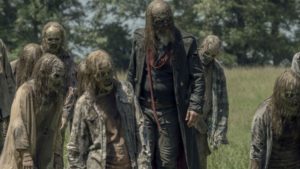 Have you ever discovered that an authority figure in your life doesn’t practice what they preach? Essentially they are saying to you, “do what I say, not what I do.”  Maybe it is a teacher or a pastor.  Or maybe even a close family member.  Any way you look at it, it becomes really hard to respect that type of leader.

This week on The Walking Dead, we find out that Alpha is that type of leader. The episode takes us back seven years to when Alpha first meets Beta and gives us just a little more insight into the motivations for both of these very messed up people.

Alpha ruthlessly runs the Whisperers like a cult.  She is the sovereign leader and everyone has to give up any of their attachments in order to join.  They especially need to give up any of their loyalties to other people and they need to be willing to make the hard decision to kill (or let be killed) anyone – even family. And this is demonstrated perfectly with our new character Gamma, played perfectly by former child actress Thora Birch. She has to make the ultimate sacrifice of her own sister in allegience to Alpha.

But later in the show, we find out that Alpha doesn’t hold the same standard to herself.  Beta catches her in a special hiding place where she has kept her daughters toy rabbit.

Beta: You kept that?

Alpha: This is for Lydia.

Beta: You said she was dead, that you killed her.

You want her back.

Alpha: You shouldn’t have come here.

Beta: Why? Why did you lie to me? She is never coming back, no matter how much you wish for it or how hard you try to replace her with someone else. She is gone, Alpha! [GROWLING.]

Alpha: [VOICE BREAKING.] Lydia is dead. Lydia is dead to me. She was dead the moment she was born ’cause she was not like me.

In this chilling scene, we see how loyal Beta is to Alpha.  But what is so striking is how hypocrytical Alpha is.  Clearly they both know that she would not tolerate this same behavior from any of their followers.  So they agree to keep it quiet… for now.

But what hits me the most is how often we see leaders do this. They demand that people adhere to a standard that they themselves are not able to keep.

Jesus dealt with this plenty in his own ministry, and he is always quick to point out the hypocrisy of the religious leadership of his day.  During the last week of Jesus life, while he is in Jerusalem, He spends some of his last words in public pointing out the hypocrisy of the teachers of the law and the Pharisees.  Matthew records this in his gospel in chapter 23.

27“What sorrow awaits you teachers of religious law and you Pharisees. Hypocrites! For you are like whitewashed tombs—beautiful on the outside but filled on the inside with dead people’s bones and all sorts of impurity. 28 Outwardly you look like righteous people, but inwardly your hearts are filled with hypocrisy and lawlessness. Matthew 23:27-8 (NLT)

Of course this imagery of white washed tombs is actually quite striking (and very appropot to TWD). Jesus is basically saying that the religious leaders of His day were dead inside, just like the bright and shiny tombs outside of Jerusalem.  He is saying that these religious leaders may look great on the outside, but inside they are filled with all of the greed, hypocrisy and sin that they are so quick to point out in others.

If you pay attention to the gospels, you will notice that Jesus does this a lot.  And you will also notice that he holds those who teach to a higher standard than others.  He basically is saying that none of these guys are fooling God.

And if you think about it, they preach that God knows our hearts, but then they act as if God can’t see inside their own hearts.  Basically, they are showing that they don’t actually believe that God sees their own hearts.  I actually think that Jesus is saying that they don’t believe in God. And so Jesus usually says in these types of passages that they have already received their reward (the praise of people) in full.

If there is one message in the gospels that I think is crystal clear, it is don’t try and fool God.  It is stupid and very serious.  Essentially, that is what religious hypocrisy is.

As a pastor and a parent, I have to be careful to never do this.  It is true that I am saved by the grace of God, but I also have a responsibility to actually practice what I preach.  Of course, I am a preacher, so this is expecially related to me.  But I think that we all need to take Jesus’ warning very seriously in our lives.  We need to remember that God does know our every thought and we need to be very honest with ourselves and with God as to the condition of our hearts.

1) At the end of last weeks episode (and this weeks episode) we see Carol and Alpha staring at each other across a canyon.  What do you think each of them are thinking?

2) Do you think that Alpha is disturbed by what Carol may know about her (especially from Lydia)? Why or why not?

3) Why do you think that Beta tells Alpha that he won’t tell anyone about her hypocrisy?

4) When we expect others to act differently than we act, what does that do to our relationships with people?

5) Does hypocrisy always involve deceiving other people? Why or why not?

6) Does hypocricy also involve deceiving ourselves? In what ways?

7) Do you think that Jesus’ warnings were just for teachers of the law and Pharisees, or do you think what he was talking about was more universal? Why or why not?

8) Do you need to examine your heart and ask the very real question as to whether there may be some hypocrisy in your life?