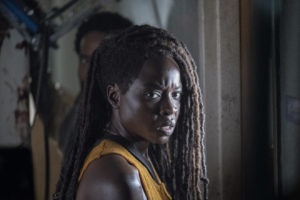 Tonight on The Walking Dead, Michonne gets to ponder these things.  What if she hadn’t saved Andrea (and later went back to her corpse to steal her knife)? What if she had sided with Negan instead of Rick and his group?  What if she had killed and tortured people who she now considers family?

Of course, this all happens because Virgil captures her and drugs her tea.  But, in Michonne’s final episode on the show, she gets a chance to think about the choices she has made over the last eight seasons. And she also gets to choose what she is going to do next, which is to go look for Rick. (Hopefully that means that we haven’t seen the last of Michonne and that she might be in some of those movies that the producers announced that Rick will be in)

When Michonne finally escapes from the room that Virgil locks her in, she and Virgil’s other victims trap him in the woods and contemplate what to do with him. The group clearly wants to kill Virgil and the Michonne of season three may have just gone along with this. But this Michonne – leader, mom and compassionate warrior, thinks differently.

Michonne: Look at him. He owes you more than he can ever make right. Taking his life… you’ll lose more of yourself. It doesn’t settle it. But your mercy gives you something. You get something.

Over the years, Michonne has learned that choices matter. Especially in the world that she lives in, people easily die when they make the wrong choices.  And Michonne also knows too well, that you end up carrying the weight of those choices with you for the rest of your life.  In her case, she realizes that her good choices are what define her. And this is why she advocates mercy for Virgil, someone who she probably would have killed without hesitation when we first met her.

As a Christian, I believe that choices matter.  I also know that there are many choices I have made in my past that I wish I wouldn’t have made. But like Michonne, I am also very happy that I made so many of the important choices that I have made.  I am so glad that I have been with my wife for the last 25 years, without whom, I wouldn’t have my two awesome kids. I am also so glad that I chose to respond to the call of ministry, go to seminary and pastor a congregation for the last ten years.

But all of these big things in our lives were started by making small choices. And these small choices may not seem significant at the time, but as the years pass we see how truly important they are.

This reminds me of a passage of scripture in the book of Jeremiah.

16 This is what the Lord says:
“Stand at the crossroads and look;
ask for the ancient paths,
ask where the good way is, and walk in it,
and you will find rest for your souls.   –Jeremiah 6:16 (NIV)

This passage was written at a time when the nation of Judah was about to go into exile. During Jeremiah’s time, Jerusalem would fall and the temple would be destroyed. So most of the poetic writing (chapter 6 is in that section) is about how the people of God need to stay faithful even when the nation is falling apart.

In this verse, the Lord is saying that people still need to make good choices even though the world seems to be falling apart. The image that the Lord uses for choices is one that is not uncommon in the bible. Here He is using the metaphor of walking different paths in life for the choices that we make.  When you make a choice, it is like choosing a path and walking on it.  Once you have chosen a path, it is hard to go back and choose another.  This is exactly the way that it works when we make choices.

But here God is warning people, that there is a right way to choose and there is a wrong way to choose. He refers to the “ancient paths” as the “good way”. What He means here, is that people need to pay attention to the scriptures no matter what happens in culture.

I can’t think of a more relevant passage to our situation today.  Often we feel like culture is moving further away from the teachings of the scriptures. But that is precisely when we need to remember that our choices do matter.  The things we do now, have a major impact on who we become in the future.

1) Michonne imagined that she let Andrea die. What do you think that Michonne would be like now?

2) Do you think it is far-fetched that Michonne could have joined Negan after Rick and his people killed saviors in cold blood? Why or why not?

3) How do you think that her conversation over the radio with Judith affected Michonnes choice about what she would do next?

5) Michonne has chosen to join a new large group and help others there. She has also decided to look for Rick. Do you think she is making the right choice? Why or why not?

6) Do you think that the choices we make define us? Why or why not?

7) Does the metaphor of talking different paths in the Jeremiah passage seem like a good metaphor?  Why or why not?

8) What kinds of things can you do to make the types of choices that you need to make to become the person God wants you to be?

9) How can we be sure that the choices we are making are leading to “the good way” as the passage says? Do the scriptures play a role in that?