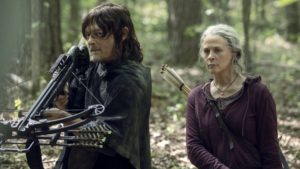 Have you ever felt like your life just no longer has purpose or meaning?

Maybe you have a job that you hate. Or maybe you are having a difficult time in a friendship, relationship or marriage. Perhaps you just have a hard time finding a reason to get out of bed in the morning.

This week on The Walking Dead, it seems like many of the characters are struggling with finding purpose in life (I might even argue that the writers of The Walking Dead might be struggling with finding purpose for the show). Despite the awesome training sequence at the beginning of the show, most of the season ten pilot was about our characters trying to find meaning in the wake of the horrible tragedy at the end of last season.

The whisperers seem to be gone for now. But the fear is always there, and according to the chilling last shot of the episode, Alpha doesn’t seem to be going awaywhere soon. So everyone is on edge and there is a constant struggle for meaning for people in the midst of all of this chaos and uncertainty.

One of the best examples of this was when Carol and Daryl get to finally just sit down together and talk after their awesom bike ride into the woods.

Daryl: Sorry if I didn’t want my best friend to spend her whole life on a boat.

Carol: Should we have matching bracelets now?

Carol: No, I could make some with fisherman’s twine. Decorate ’em. It’ll be really cute with tiny, little seashells.

Daryl: I got an idea. Why don’t we eat and not talk?

Carol: Should we make a matching collar for Dog? (chuckles, then pauses). Daryl?

Carol: You ever wonder if this is all there is? Just run into people, kill each other until whoever’s left says enough?

Daryl: Sometimes I think we’re just survivin’ one fight to the next.

Carol: It was like that for you and me before all this.

Daryl: Yep. There’s got to be people out there like us. Right?

Carol’s connection to Daryl is partly based on the fact that they were both survivors of severe abuse before the dead started walking. But after about a decade of fighting walkers (the producers of the show still don’t give us the exact amount of time passed) , they are still wondering if this is all there is in life. Carol points out that the two of them have been in survival mode long before the outbreak, but they are still really bothered by the seeming pointlessness of this life.

The most interesting part of this discussion between the two of them to me, is that they seem to be admitting that their lives have always seemed purposeless – before and after the zombie apocalypse. And let’s face it, when you are in survival mode these questions always come to the surface faster. It is often when life is best that we don’t bother with these questions.

But in my experience, I believe that you can find purpose, even the most dire of situations. Just three weeks ago, I was with a friend of mine who has been really sick for years. We were at a hospital where his wife and family were all there with him. He was told that he only had a week to live. I can’t imagine what that would feel like to hear something like that from a doctor. But his response wasn’t what you would expect. He wasn’t scared of death, he was just sad that he wasn’t going to get more time with his family.

He told me that he actually felt peace about this because his life had been filled with so much purpose. When I asked him about what he meant by purpose, he quickly told me that when he became a follower of Jesus, the meaning of his entire life changed. He said that he no longer focused on diverting himself, but on loving others. He said that being a follower of Jesus turned everything around for him.

And then he said something to me that I will never forget. He said that this diagnosis “just means that my wonderful life is just about to get better.” And yes, he was referring to his own death as to what was going to make his already amazing life get better.

My friend passed away that week, and I already miss him. His wife and adult children miss him terribly. But I will never forget his words. He felt like he was connected to something so much bigger as a follower of Jesus. He felt like there was so much more to this life than he ever experienced before he knew Jesus.

The last time that I saw him in the hospital, we knew it was probably the last time. But he said to me “the next time I see you we will be in glory!” And there is no question in my mind that he believed it like he just knew it to be true.

It reminds me of the passage that Peter wrote in his epistle.

But you are a chosen people, a royal priesthood, a holy nation, God’s special possession, that you may declare the praises of him who called you out of darkness into his wonderful light. 1 Peter 2:9 (NIV)

I love how Peter describes this tranformation. He talks about moving from darkness to “His wonderful light”. My friend moved from darkness into light in his life, and it became filled with all kinds of purpose and meaning. He felt connected to something bigger and he no longer experienced the existential pain that so many people (myself included) have felt.

When you ask the question, “is this all there is?”, there is an answer to that question. Jesus made it possible when he died for our sins on the cross. By deciding to believe in Jesus and make him Lord of our lives, we are connecting to something profound. We are connecting to the meaning and purpose of everything. And according to my friend, not even death can take away the meaning of a life of following Jesus – it just can just make a wonderful life even better.