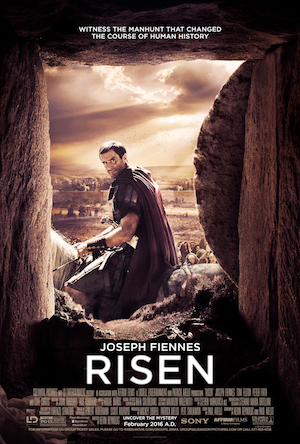 (Sony Pictures, 2016)
Main Point: There are many reasons why people choose to follow Jesus, but all of them begin with the fact that He is a Man of compassion.

The Movie Clip:
Risen follows the journey of Roman tribune Clavius (played by Joseph Fiennes) as he searches out what happened to Jesus of Nazareth following His brutal execution and burial. The Roman soldier – who witnessed Jesus dead on the cross – is tasked with investigating the mystery that has all of Jerusalem (and Rome) up in arms. Eventually, Clavius comes face to face with the risen Jesus…and he must decide if what he’s seeing is true.

Risen was released before Easter of 2016 and garnered fairly strong reviews. The film was rated PG-13 by the MPAA for intermittent scenes of graphic violence, namely the beating and crucifixion scenes. Otherwise, the film (and the clip this resource hinges on) is completely clean.

The movie uses characters, like Clavius, not expressly mentioned in the Bible’s writings, but stays completely true to the Bible’s message. The movie is a great tool for helping unbelievers process what they believe and why.

Introducing the Clip:
I want to show you a clip from the movie Risen which follows the spiritual journey of a Roman soldier named Clavius. The “tribune” oversaw the crucifixion of Jesus, but he’s now come face to face with Jesus alive again. As he investigates what happened that Easter morning, he’s found the disciples and interviewed them. As his faith grows little by little, he decided to tag along with the disciples to keep asking them questions about why they believe Jesus was the Messiah and if they truly thought He was actually alive. In this scene, Clavius asks Bartholomew the following question: Why do you follow Him? Take a look at how the question gets answered.

(The clip is several moments long. The focus of the scene is that Clavius asks Bartholomew, “Why do you follow Him?” Before Bartholomew can answer, a leper appears in the background causing a ruckus. Jesus walks over to the man, offers him some food, and then heals him. Bartholomew, referencing the miracles, says, “That’s why.”)

A man with leprosy came to him and begged him on his knees, “If you are willing, you can make me clean.” 41 Filled with compassion, Jesus reached out his hand and touched the man. “I am willing,” he said. “Be clean!” 42 Immediately the leprosy left him and he was cured. 43 Jesus sent him away at once with a strong warning: 44 “See that you don’t tell this to anyone. But go, show yourself to the priest and offer the sacrifices that Moses commanded for your cleansing, as a testimony to them.” 45 Instead he went out and began to talk freely, spreading the news. As a result, Jesus could no longer enter a town openly but stayed outside in lonely places. Yet the people still came to him from everywhere.

Wrap Up:
During our time together, we watched a clip of Jesus healing a man with leprosy. Then we read the Bible’s account of the same event. What we saw in both was that Jesus had great power…and great compassion.

In fact, Jesus’ compassion was the beginning point of much of His work and ministry. For example, one time the Bible tells us that Jesus took compassion on a crowd because He considered them to be sheep without a shepherd (Matthew 9:36). Just like the man with leprosy, Jesus healed others because of His compassion (Matthew 14:14). Jesus also miraculously fed large crowds of people because, out of His compassion, He knew they were very hungry (Matthew 15:32).

There were other examples, but the bottom line is simple: Jesus was a Man of life-changing compassion. When He looks at us, He knows we need Him. Ultimately, it was His compassion and love and kindness for us that sent Him to the cross. He knew we could never be forgiven, never see the Father, and never have peace apart from Him. So, He willingly – and compassionately – gave His life for ours.

My hope and prayer for you is that you’ll see Jesus as the Man of compassion that the Bible teaches that He is. Once you do, you’ll have your life changed forever. And I don’t just mean skin deep like the leper we studied. I mean all the way to the very core of your heart. You will be made new. You will have hope. You will have life.

All because Jesus was a Man of compassion.

I hope you’ll meet Jesus in the way that the leper did and you’ll be just as excited about Jesus as that man was. We’re going to pray in a moment, and if you’d like to talk more about Jesus’ compassion in your life, talk with me or one of our adult leaders. We want to show you just how compassionate and kind and good Jesus is.