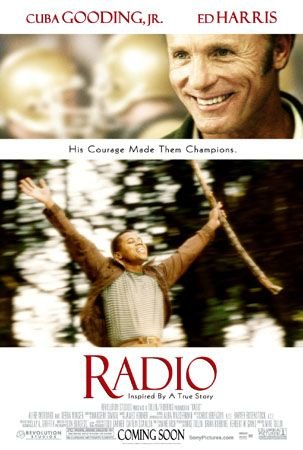 Attention Grabber: Movie – Radio
The story of a high school coach and the developmentally challenged man whom he took under his wing.
Radio contains a few good scenes for discussions on accepting others different from us, compassion, humility vs. pride, taking a stand, and caring when it costs.

Clip: “A mistake to care about Radio?”
For this discussion, we use two scenes to talk about the cost of compassion. The first clip has Coach Jones and his wife discussing whether or not it is worth it to allow Radio, a developmentally challenged student to remain helping with the sports program. The first clip begins at 1:34:40. Be very careful, however, because the very first line has a swear word in it. I suggest you begin right after that line. The scene introduction will help stay away from awkwardness in starting a clip in the middle of a conversation. Have 3×5 cards & pens ready for the wrap up.

The second slip we will show begins at 1:37:24. This is a scene where Coach Jones has realized that it is time for him to step down from coaching so that he can put his time and focus into Radio and his wife and family.

Scene 1 Introduction:
Today's discussion is about compassion. This time, we're actually going to watch a couple scenes from the movie Radio. The movie is about a developmentally challenged boy named Radio, and how a high school football coach, Coach Jones, has changed the entire school and community by showing compassion to Radio. But now, things are getting difficult for the coach because some people are against his allowing Radio to be a part of the sports program. In this scene, we hear Coach questioning if it’s worth it. As we watch this first clip, pay attention to the difference in perspective between the coach and his wife. Right now, Coach has just said to his wife that it would have been better if instead of spending so much time with Radio, it would have been better to go get him some help.

Linda: Help? And what you’ve been giving him has been…?

Coach: Couldn’t have been easy on you and Mary Linda… me spending all this time with Radio the past few months.

Linda: Harold, wait. You can’t believe that’s been a mistake, you being with Radio. You’ve been so great for each other.

Coach: Yeah, well, look where it’s got us.

Linda: Where it got you is a school full of kids that love him. And Mary Linda feels the same way. And anything that Frank can do or say – that’s not gonna change anything. It’s never a mistake to care for someone. That’s always a good thing. Right?STOP here (before church scene) as Coach thinks about what Linda has just said.

Note: Set up for Clip 2 while you continue the discussion.

Matthew 25:34-40 (NLT)
Then the King will say to those on the right, 'Come, you who are blessed by my Father, inherit the Kingdom prepared for you from the foundation of the world. [35] For I was hungry, and you fed me. I was thirsty, and you gave me a drink. I was a stranger, and you invited me into your home. [36] I was naked, and you gave me clothing. I was sick, and you cared for me. I was in prison, and you visited me.'
[37] “Then these righteous ones will reply, 'Lord, when did we ever see you hungry and feed you? Or thirsty and give you something to drink? [38] Or a stranger and show you hospitality? Or naked and give you clothing? [39] When did we ever see you sick or in prison, and visit you?' [40] And the King will tell them, 'I assure you, when you did it to one of the least of these my brothers and sisters, you were doing it to me!'

Scene 2 Introduction
Now we're going to show the second movie clip. This takes place later on in the movie. This scene is a meeting between the Coach and some upset parents who think that Radio should not be part of the school community. Listen carefully to what the Coach says.

Clip 2: Setting that Right
Fast forward to 1:37:24 (Scene 28 on the DVD), a scene beginning in the barber shop. There is a meeting with some of the parents and the principle. One disgruntled parent wants everyone to agree that Radio is “a disruptive force” in the community because of some incidents that happened earlier in the film. Coach Jones enters with his wife and daughter.

Coach Jones: Well, I had a talk with Radio this morning. I told him, in not so many words, that we might be looking at some changes. It didn’t take long to see the more I talked the more he didn’t understand me. We got a lot of that going on around.
When I was playing, I had a coach. He used to tell me to keep my priorities straight. He’d say, “Son, you figure out what’s important. You push everything else aside.” I love football; I love everything about it. I love Friday nights when you’re looking for a win and Saturday mornings when you found it.
But that’s not what’s important right now. We got ourselves a young man we’re not thinking about. The same young man who could hardly talk when we first met him, and now he’s making announcements in the morning over the loudspeaker. Same young man who got himself a football letter last fall, but he never wears it, because he can’t afford a jacket. Now we’re asking him to leave…
…I know some of you don’t know or don’t care about all that Radio’s learned over these past few months. Well, the truth is we’re not the ones who’ve been teaching Radio. Radio’s the one been teaching us. ‘Cause the way he treats us all the time is the way we wish we treated each others even part of the time.
Look, I know something’s gotta happen here. I know some changes gotta be made. And I know I can’t let what happened last season happen again. So I’ve decided to step down as head football coach…(crowd murmurs disappointment)…I’d like to keep teaching, if that’s all right. Keep an eye on Radio, make sure he stays out of trouble. And I’d like to spend a little time with a few other folks I’ve neglected over the years…while I still have a chance to. Much as I love this game, you know, it’s not half as important as setting that right.
STOP when the truck drives off and the auditorium scene fades out of view.


Wrap-up:
What will that look like in your life? How can you shift your priorities so that you’re walking out what Jesus said in Matthew 25?
(We suggest playing a worship CD conducive to prayer and reflection.) We’re just going to take a moment of silence and ask God to help us set and walk out His priorities in our lives. If He lays it on your heart to actually do something – like send a card, buy a soda for someone you wouldn’t normally interact with, or invite them to church, write that down on this 3×5 card I’m passing around. Then, let’s break up into pairs asking each other what we wrote down and praying for each other–-that we’ll obey God’s leading and walk out those priorities.

Optional Wrap-up:
Who or what kind of person in your school or neighborhood do you consider “the least of these”? Maybe you haven’t been as kind to that person who “gets on your nerves” as you could be. We’re just going to take 60 seconds of silence and ask God to help us care about that person. If He lays it on your heart to actually do something – like send a card, buy them a soda, or invite them to church, obey that still, small voice and do it!
By Jonathan McKee 0 Comments
Share