Pirates of the Caribbean-Curse of the Black Pearl 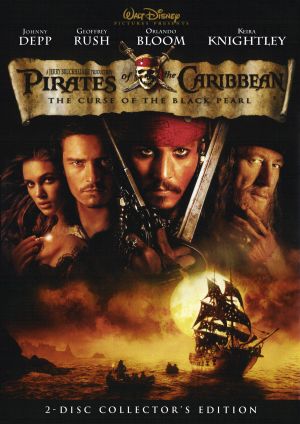 Main Point: We’re all under the curse of sin, and the only sacrifice that will lift it is the blood of Jesus Christ.

The Movie Clip:
Pirates of the Caribbean: The Curse of the Black Pearl set in motion one of the biggest movie franchises in the history of Hollywood. In the swashbuckling tale, Johnny Depp and Orlando Bloom lead a cast of buccaneers, soldiers, and civilians on a quest against a dreaded curse.

The ship of Captain Jack Sparrow (played by Johnny Depp), The Black Pearl, was seized by his mutinous crew under the leadership of his first mate, Hector Barbossa. The crew of misfits then stole cursed gold and consequently were cursed, themselves. The key to lifting the curse lies with the son of one of the former mutineers, William Turner (played by Orlando Bloom). The Victorian era action sucks in everybody from friends to the entire English Navy.

On the whole, the film was a fantastic and family-friendly tale, but was rated PG-13 for scenes of action, adventure, and violence.

Introducing the Clip:
We’ve all probably seen the original Pirates of the Caribbean movie with Johnny Depp and Orlando Bloom, but let me take you back to one of the most important scenes in the movie. Captain Barbossa has just kidnapped Elizabeth Swan and has taken her to the pirates’ secret island where they intend to extract a blood sacrifice from her to lift a curse they are under. There’s only one problem: Elizabeth Swan’s blood isn’t the blood they need. Take a look at what happens when they discover that truth.

NOTE: This film has been available for rent or purchase for a long time now. You’ll need to either buy it or rent a copy and cue it up to the scene below in order to show it to your group.

(This is a long scene, so a synopsis will be given instead of verbatim dialogue.)

The clip opens with the pirates taking Elizabeth to their secret island in order to extract her blood to lift the curse they’re under. They don’t know that Jack and Will have followed them into their lair.

Once inside, we’re told about the curse that the pirates are under. They’ve suffered a long time for stealing the cursed gold, but now they think the curse will be lifted by forcing Elizabeth to make a sacrifice of her blood. Unfortunately for the pirates, Elizabeth isn’t who they think she is, and so the curse isn’t lifted.

In the midst of a disagreement amongst the pirates, Will helps Elizabeth escape with the gold medallion. The pirates begin to chase as the clip closes.
END CLIP AT 1 HOUR 14 MINUTES AND 55 SECONDS.

Transitional Statement:
So, the pirates were under a curse they couldn’t lift. They thought they could unshackle themselves from the curse by sacrificing some of Elizabeth’s blood, but what they discovered was that Elizabeth had the “wrong blood.” She wasn’t the sacrifice the pirates needed. As a consequence, the pirates remained under their curse. Here’s where this impacts us: you and I are also under a curse, the curse of sin and death. Unfortunately for you and me, it’s a curse that we cannot lift through a sacrifice of our own. Someone else has to lift it for us. That Someone is Jesus Christ. He is the only One who has the “right blood” to lift the curse of sin and death from us. Let’s spend a few minutes talking about this important truth in our small groups.

You foolish Galatians! Who has bewitched you? Before your very eyes Jesus Christ was clearly portrayed as crucified. 2 I would like to learn just one thing from you: Did you receive the Spirit by observing the law, or by believing what you heard? 3 Are you so foolish? After beginning with the Spirit, are you now trying to attain your goal by human effort? 4 Have you suffered so much for nothing– if it really was for nothing? 5 Does God give you his Spirit and work miracles among you because you observe the law, or because you believe what you heard? 6 Consider Abraham: “He believed God, and it was credited to him as righteousness.” 7 Understand, then, that those who believe are children of Abraham. 8 The Scripture foresaw that God would justify the Gentiles by faith, and announced the gospel in advance to Abraham: “All nations will be blessed through you.” 9 So those who have faith are blessed along with Abraham, the man of faith. 10 All who rely on observing the law are under a curse, for it is written: “Cursed is everyone who does not continue to do everything written in the Book of the Law.” 11 Clearly no one is justified before God by the law, because, “The righteous will live by faith.” 12 The law is not based on faith; on the contrary, “The man who does these things will live by them.” 13 Christ redeemed us from the curse of the law by becoming a curse for us, for it is written: “Cursed is everyone who is hung on a tree.”


Wrap Up:
We watched some slightly gruesome stuff in the clip from The Pirates of the Caribbean, and then we got into some slightly deeper theology during our small group discussions. But I hope you tracked along with us as we studied the Bible. The point we want you to walk away with tonight is a crucial one: we’re all under the curse of sin, and the only sacrifice that will lift it is the blood of Jesus Christ.

That’s why we read the passage from Galatians. Those folks knew they were under a curse…but they had a very “foolish” way of dealing with their situation. Instead of lifting their curse they only made it worse. I just don’t want you to have to face that same reality. Instead of acting like a fool, I want you to become a follower.

The Apostle Paul made it clear in Galatians 3 that it is ONLY Jesus that can set us free of our curse of sin and death. You and I need to ask Jesus to forgive us of our sins, and commit to following Him. That’s the only way to be set free from the curse.

Do you know how I know this? Take a listen to what the same Paul wrote over in Romans 3:20-27.

No one will be declared righteous in his [God’s] sight by observing the law; rather, through the law we become conscious of sin. 21 But now a righteousness from God, apart from law, has been made known, to which the Law and the Prophets testify. 22 This righteousness from God comes through faith in Jesus Christ to all who believe. There is no difference, 23 for all have sinned and fall short of the glory of God, 24 and are justified freely by his grace through the redemption that came by Christ Jesus. 25 God presented him as a sacrifice of atonement, through faith in his blood. He did this to demonstrate his justice, because in his forbearance he had left the sins committed beforehand unpunished– 26 he did it to demonstrate his justice at the present time, so as to be just and the one who justifies those who have faith in Jesus. 27 Where, then, is boasting? It is excluded. On what principle? On that of observing the law? No, but on that of faith.

In this passage, Paul makes it clear that Jesus is the ONLY ONE with the “right blood” for lifting the curse of sin and death from us. If you don’t know the story of how that happened, let me explain it to you quickly.

The Bible teaches that Jesus, God’s one and only perfect Son, left Heaven to come to Earth to die on the cross for our sins. Now, remember back to the passage from Galatians for a second. Paul said that Jesus became a curse FOR US to remove the curse FROM US. Jesus did that when He died on the cross. His blood was literally shed for us because He loves us. That same blood is the blood that Paul talks about here in Romans 3 that I just read to you now.

So, let me lovingly warn you. All of us were born under a curse; there’s no arguing that fact. If you want evidence of that, just look at your lifestyle. No matter how good you try to be, you still lie, cheat, cross boundaries, hurt others, and so on. That’s sin. That comes from the curse.

But let me continue. You cannot lift the curse you are under. Only Jesus can do that because of His perfect blood. If you try to lift the curse yourselves, you will look just as foolish as those pirates who chose to sacrifice the wrong blood.

So, here’s my question for you: If you haven’t asked Jesus to remove the curse of sin and death from you, why not?

Before you leave tonight, take a look at your life and your heart. If you have any doubts that you remain under the curse of sin and death, hang around for a moment after we pray and speak with one of our adult leaders. It will be the most important conversation of your life.