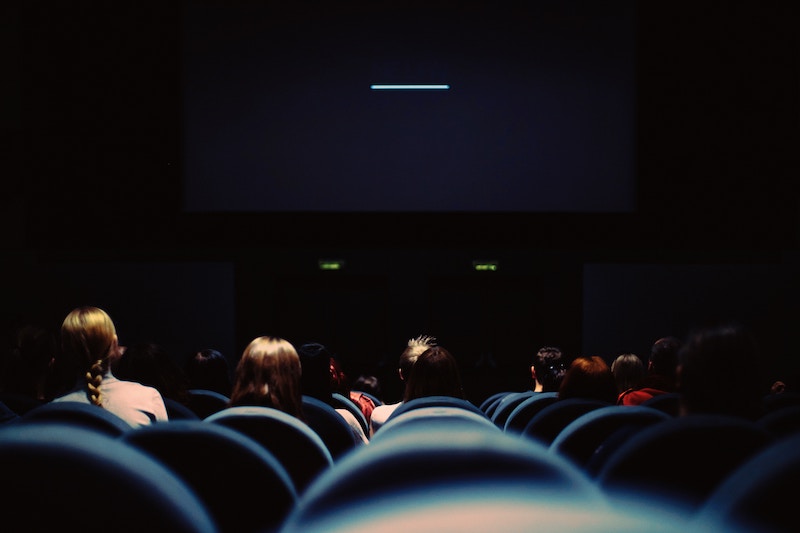 In this first date skit, a movie theater is so packed that there are only two seats left on opposite ends of a row. The guy on the date must “pass it down” when he wants to share popcorn and candy with his date on the other end of the row.

Skit:
All except 2 volunteers sit watching a movie. They have filled all the chairs except for one on each end of the row. Two characters (date guy and date girl) enter dressed in nerdy costumes and acting as if they are out on a date. The guy is carrying popcorn, candy bar, and the pop. They notice that there are only two seats left, one on each end of the row. The date guy sits on one end, while the date girl sits on the other end of the row. They shrug as though they will have to “make do” and then lean forward or behind the others in the row to look at each other and blow kisses and wink.

Date guy takes out the candy bar, takes a bite, and then asks the next person to Òpass it downÓ to his date. The movie go-ers act annoyed but when the candy is passed by them they go ahead and take a bite. Some of them hesitate while others dig in. They continue to pass the candy bar down, but each takes a bite so that it is gone by the time it gets down to his date. All she gets is the wrapper. She licks it and smiles down the row at her date.

He passes the popcorn whispering, “Please pass this down,” and the same thing happens. He leans forward and gestures a question, “You want some soda pop?” and she eagerly nods “yes.” Date guy asks the person next to him to “pass it down.”The pop cup is passed down and each movie-goer sips and slurps (the more exaggerated the action, the better the skit). The two on the date continue to act as though they are enamored with each other (cheesy grins and little waves and winks and blowing kisses).

Continue with each food item being passed and consumed by all the strangers in the row while the two on the date just long for each other. Each time an item is passed the audience hears all in the row whispering or grumbling or saying, “Pass it down.”

The male on the date decides it’s time to make his move. He does the old “yawn and stretch” move to get his arm around his date, only, he is actually embracing the guy sitting next to him as he says, “Pass it down.”

The first guy (sitting next to date guy) tries to put his arm around the person sitting next to him and then asks him/her to “pass it down” which they do. When the arm-around gets to the end of the row, the guy next to date girl puts his arm around her and she kind of likes it, and he leaves his arm there. Date guy sees this from his end and starts to get upset. He tries to get her attention but she is focused on this new attraction.

Date guy decides he needs to get more serious and he taps the shoulder of the man next to him and says, “Pass this down” and then kisses him. The first guy in the row is astounded but says “OK” and turns to the girl next to him. “Pass this down,” he tells her and kisses her. She turns to the guy next to her and does the same until the kiss reaches date girl at the end of the row. Date guy is still watching as the guy sitting next to his date kisses her. The two “kiss passionately” (hand over mouth type).

Date guy goes crazy as the last two walks out together.