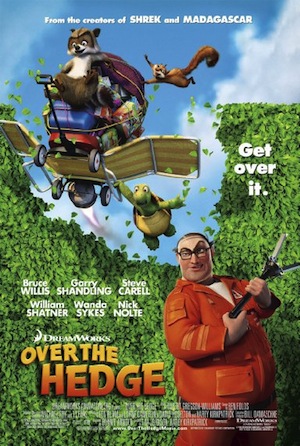 (Dreamworks, 2006)
Main Point of Discussion: It’s easy to get in trouble when we get greedy.

The Movie Clip: “Just take what you need.”

This short animated movie is a great one because it’s completely clean, has terrific humor, and is jam-packed with tons of teaching about truly loving family and friends. It follows the story of RJ, the sneaky and conniving raccoon, and the trouble he gets himself into by stealing ALL the food from a killer bear named Vincent. RJ is caught in the act, but Vincent allows him to live, only so he can replace all the food he stole. RJ “befriends” other animals, only to manipulate them into helping him with his life-and-death task.

The clip we are using is the opening scene of the movie. In it, RJ displays dangerous levels of greed and pays a high price for them. Instead of just taking the small amount of food that he needs, he gets greedy and tries to take it all. This opening scene puts him on a collision course with Vincent.

Introducing the Clip:
I want to show you a clip from the movie Over the Hedge. If you’ve seen this movie, you know it’s a great one because of its awesome humor, star-studded cast, and terrific lessons you learn about HOW TO, and HOW NOT TO, treat the people in your life.

This scene shows the trouble RJ the raccoon gets into at the beginning of the movie because of his tremendous greed. His hunger leads him into the cave of a very scary bear named Vincent. Instead of taking just a little bit of food, and getting out alive, RJ’s greed gets the best of him. Let’s take a look at what happens to RJ and see if there is something we can learn.

(RJ the Raccoon is trying to get a bag of chips from the snack machine. The bag of chips gets lodged on the way down, so RJ delves into his bag of tricks to try and dislodge it. Every attempt he makes, fails. Then he sees the cave that belongs to Vincent the bear.)

(But immediately his stomach growls and he chooses to invade Vincent’s cave, looking for food.

He uses a rod and reel with a hook to grapple himself up to Vincent’s remote cave on the side of a cliff. He carefully, but not so quietly, sneaks into the cave and grabs a few bags of chips that are scattered about.

But then he sees the mother lode! He drops the bags of chips and walks over to the pile of goodies in a trance-like state…until Vincent stirs and yawns and blocks his way. RJ reaches into his bag of tricks again, this time pulling out a paddle and ball, and uses it “Indiana Jones style” to swing over and past the sleeping bear. At last, he is standing in front of the huge pile of food.)

(In spite of trying to convince himself to take ONLY what he needs, we see that RJ greedily loads up Vincent’s red wagon with ALL of the food in the cave. He deploys his final trick from his bag, launching himself back over Vincent, who is still asleep.

He is now standing at the mouth of the cave, home free. But he takes one last look back and sees that Vincent is holding a single can of Spuddies, RJ’s favorite snack. Even though he has the rest of Vincent’s food, he wants the can of chips, as well. RJ bravely walks over to the sleeping bear, and pries the can from his huge paw.

RJ smiles to himself, and in a moment of brief celebration and relief, opens the can of chips…which wakes the sleeping bear!)

Vincent: The moon is not full. You woke me up a week early? (Then noticing all of his stuff bundled up by the cave entrance) Oh no…. Don’t tell me, you’re dumb enough to actually try and steal my stuff? RJ, I’m gonna have to kill ya.END CLIP AT 0:04:17 as RJ begins to beg for his life. (still in Chapter 1)

Transitional Statement:
This scene clearly shows how greedy RJ was. He was not content with taking a few bags of chips. Nor was he content in taking a wagon load of food. He wanted EVERYTHING! We also saw the trouble that RJ got into as a result of his greed. He told himself to, “Just take what you need,” but his greed got in the way…and then he got in serious trouble!

Read Joshua 7:13-21
(Make sure your students understand the story’s context. You can use this intro below:)

During the last few weeks, God’s people, the Israelites, have been following Joshua as he led them into the Promised Land. God had promised the Israelites a place to live, where they could be free and worship God as He desired. Things were going great, initially. They had miraculously crossed the Jordan River, conquered Jericho, and had now set their sights on the small city of Ai (pronounced “I”).

But when they tried to capture the city of Ai, many soldiers were killed, and Israel was defeated and humiliated. The fickle people were quickly losing hope, so Joshua prayed to God asking Him why they were defeated. God tells Joshua that someone from the Israelites has broken His rule concerning “devoted things.”

“Devoted things” were usually statues and idols that the people of Ai used in their own false worship. Often times, these items were valuable because they were made from precious metals like gold and silver. God did not want His people to fall in love with the idols and false gods of these wicked people, so He had instructed the Israelites to destroy everything in the wicked cities, including the “devoted things,” no matter how valuable it was.

Regardless of what God had said, one guy named Achan had a different idea. Check out what God has to say about the situation Achan has gotten the Israelites in.

13 “Go, consecrate the people. Tell them, 'Consecrate yourselves in preparation for tomorrow; for this is what the LORD, the God of Israel, says: That which is devoted is among you, O Israel. You cannot stand against your enemies until you remove it.
14 ” 'In the morning, present yourselves tribe by tribe. The tribe that the LORD takes shall come forward clan by clan; the clan that the LORD takes shall come forward family by family; and the family that the LORD takes shall come forward man by man. 15 He who is caught with the devoted things shall be destroyed by fire, along with all that belongs to him. He has violated the covenant of the LORD and has done a disgraceful thing in Israel!' ”
16 Early the next morning Joshua had Israel come forward by tribes, and Judah was taken. 17 The clans of Judah came forward, and he took the Zerahites. He had the clan of the Zerahites come forward by families, and Zimri was taken. 18 Joshua had his family come forward man by man, and Achan son of Carmi, the son of Zimri, the son of Zerah, of the tribe of Judah, was taken.
19 Then Joshua said to Achan, “My son, give glory to the LORD, [d] the God of Israel, and give him the praise. [e] Tell me what you have done; do not hide it from me.”
20 Achan replied, “It is true! I have sinned against the LORD, the God of Israel. This is what I have done: 21 When I saw in the plunder a beautiful robe from Babylonia, [f] two hundred shekels [g] of silver and a wedge of gold weighing fifty shekels, [h] I coveted them and took them. They are hidden in the ground inside my tent, with the silver underneath.”

NOTE: This story is intentionally shortened to NOT include the ending because it is so violent and may actually distract the students from your point on “greed.” Feel free to use the rest of the story (going through verse 25) but be prepared to answer some questions about “Why was God so mad that He had Achan and his entire family killed?” These are legitimate questions, and should be treated as such, but they are not on the topic of greed. You can simply say that the story continues and we see that Achan is punished for his greed. You make the call.

15Then Jesus said to them, “Watch out! Be on your guard against all kinds of greed; a man's life does not consist in the abundance of his possessions.”

Wrap Up:
If you are honest with yourself for a moment, you will see that there is something in your life that causes you to be greedy. Maybe for some of us, there are multiple things in our lives that cause us to act greedily.

It is clear to see where God stands on the issue of greed. He does not like it. He told the Israelites when they were wandering in the dessert to only pick up the amount of manna (bread that came from Heaven) that they NEEDED. If they got greedy and tried to pick up more, it would only spoil. In the Book of Proverbs, God warns what happens to greedy people over and over and over again. Even Jesus sternly cautions us to not be greedy.

The last question you were asked in your groups was, “What is the best way to prevent greed?” What kind of answer did you give? I would like to suggest an answer to you for that question… but just know… it’s fairly radical!

This is way different from what we want to do. But it is exactly what God wants us to do. So, you have a choice, live generously with others and avoid lots of trouble in your life. Or, live greedily, and risk the troubles we talked about tonight.