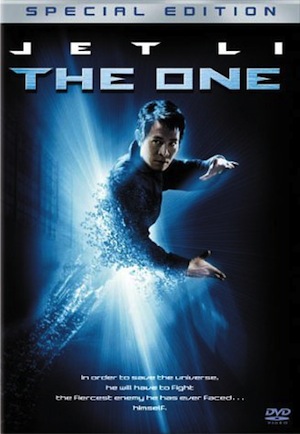 Attention Grabber: Movie – The One
The One is a pretty entertaining movie. To sum it up, it’s basically a typical Jet Li martial arts movie, combined with Matrix-style special effects. The movie takes place in the future, where there are 23 universes, all similar versions of this one. An assassin named Yulaw (Jet Li) has found a way to travel from one universe to another, attempting to kill all of the other versions of himself. So in a nutshell, the movie is about Jet Li fighting against himself. A good excuse for two Jet Li’s in one movie. If you’re not into martial arts or science fiction, chances are you won’t like the movie. On the other hand, if you’re really into martial arts, you’ll be amazed to see Jet Li fighting himself using two completely different styles of fighting. Pretty cool. As far as appropriateness, it’s got a lot of fighting, a couple people dying, not much blood, and there are a few “S-bombs” dispersed throughout the movie (that means a little swearing).

Clip: Taking myself on…
The clip we’re using is during the last battle of the movie. The good version of Jet Li, Gabe, must now confront the evil version, Yulaw, in an all out duel. Yulaw has just defeated an agent of the inter-dimensional police (gosh that sounds cheesy), played by Jason Statham (The Transporter, Italian Job). Now Gabe steps up to challenge Yulaw once and for all. The entire scene is one big fight scene with only three lines of dialogue, but ends with Yulaw defeating Gabe. It is a great illustration of how we fight our own sinful nature, and how sometimes it just seems unbeatable. And trust me, the boys in your group will cheer. The clip begins at approximately 66:06, when Jason Statham is hanging on the railing of a case of stairs, and ends at approximately 68:48, when Jet Li is lying on the ground. Because of the nature of this particular clip, you don’t have to be as precise with the timer as some of the other film clips.

Scene Introduction:
You know, I’m tired of some of the stupid stuff I keep doing in my life. (This would be a great time to share something that you might struggle in. Be sure it’s appropriate to share with students, of course.) It’s almost like there’s a war going on inside me. In fact, I would say that a lot of times I’m fighting with myself. I found this clip from a movie called The One, that gives a really good picture of what is going on inside my heart. Just so you can tell the two apart, the bad guy is the one who takes off his jacket and ties it around his waist. Let’s go ahead and watch the clip and then we’ll get together afterward to talk about this battle we fight with ourselves.

Scene Script:
(Really there isn’t much of a script to write for this scene. But here are the lines:)

GABE: Yulaw! You came here for me. Now I am here for you.

YULAW: After this, there will be only one.

GABE: I won’t be the one. But neither will you.
After this, Gabe and Yulaw fight in a warehouse until Yulaw finally defeats Gabe. He knocks Gabe against some sort of appliance in the warehouse and he falls to the ground. It seems as if he’s beaten.

Transitional Statement:
This clip is exactly what goes on in my heart so much of the time. It feels like I’m at war with myself. It seems like I keep doing the stupid things that I try so hard not to, while I just can’t do what I keep promising God I will do! Have you ever felt that way? You know, the Bible actually talks about this battle that is going on.

Divide into Small Groups:
Let’s break up into our discussion groups and try to figure out just exactly what to do with this battle. Perhaps we can figure out how to finally win some of these fights. Then afterward we’ll come back together for a final word.

You know, the Bible tells us that we actually do have a fight going on inside us. Listen to what Paul, the guy who wrote a huge chunk of your Bible wrote. He’s totally bummed about what he keeps doing.

Read Romans 8:1-2
… Therefore, there is now no condemnation for those who are in Christ Jesus, because through Christ Jesus the law of the Spirit of life set me free from the law of sin and death.

Wrap-Up:
You know, it was amazing when I realized that the part of me that wins the battles is the part that I personally give the most power to. I’m tired of the battle that is being waged in me. And yet, the battle is almost unnecessary! Sin has no power over me! It has no power over you! It only has as much power as we allow it to have. We need to give the Spirit the power in our lives. I really want to challenge all of you with something. You’ve already shared about your struggles and how you want to battle them. But we always must remember that we need God’s help in doing that. So I insist that all of you, for the next seven days, before getting out of bed, ask God to fill you with His Spirit, so that you can have the power to overcome sin. Thank Him for not condemning you for anything you’ve already done, but also ask Him to help you that day. We are going to give you a piece of paper that has Romans 8:1 written on it. I want you to cover your alarm clock with the paper, so that when your alarm clock goes off in the morning, you’ll either see the paper or feel it when you go to hit the snooze button. Before doing anything else, pray for God to give you strength. Remember that the mind controlled by the Spirit is life and peace. Let’s pray.