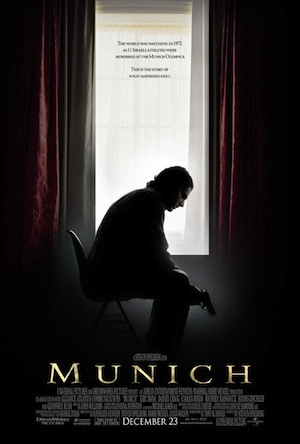 Introduction: Think of a time when someone did something terrible to you—something wrong and unfair, an action that seems to demand retaliation.

Our world’s history is full of wrong doings—wrong and unfair acts that seem to deserve retaliation. Races kill other races. Brothers even kill brothers.

How are we called to respond? I’m not talking about a political debate or a discussion on capital punishment. I’m talking about what we, as individuals should do when someone is cruel to us.

Introduce Movie Clip: In 1972 eleven Israeli athletes were murdered at the Munich Olympics by a Palestinian terrorist group known as Black September. In retaliation, Israel put together a special team of Mossad agents to track down and assassinate every one of those responsible for the murder.

In 2005 Steven Spielberg released the highly debatable film, Munich, which told a fictional story, based on these true events. The film earns its R-rating quickly and is hard to watch in parts. (CLICK HERE for Jonathan's review of this film) I want to show you a one minute clip—the clip is completely clean.

This scene is two hours into the movie. The Israeli team has been assassinating Black September members one by one. Some of the Israeli team members are starting to feel guilt and regret for their actions. They are beginning to question their methodology—after all, they are Jews. They were raised to be righteous.

In this scene the four remaining Jews on the Israeli assassination team are boarding a train to go kill a lady that just assassinated one of their own team. Robert hesitates as he approaches the team. Avner, the team leader, stops to talk with him.

Start the clip at 2 minutes and 19 seconds into the movie or this clip is available to download and purchase from WingClips (as seen in the embedded video clip above).

(The scene begins as you see four men walking upstairs toward a train. Robert stops. Avner stops to talk with him.)

Robert: So, you’re really going to kill her? All this blood comes back to us.

Avner: Eventually it will work. Even if it takes years, we’ll beat them.

Robert: We’re Jews, Avner. Jews don’t do wrong because our enemies do wrong.

Avner: We can’t afford to be that decent anymore.

Robert: I don’t know that we ever were that decent. Suffering thousands of years of hatred doesn’t make you decent. But we’re supposed to be righteous. That’s a beautiful thing. That’s Jewish. That’s what I knew. That’s what I was taught. And now I’m losing it. And I lose that… that’s everything. That’s my soul!
End the clip at 2 minutes and 01:24 with the shot of Avner’s face as he takes in what Robert just said. End the clip before Avner’s next line. (Definitely don’t go any further with the clip. The next scene is brutal—you will NOT want to show it!)

Transition Statement:
As you can see, Robert was beginning to feel guilty now that he had begun carrying out his revenge.

Read the Following Passage of Scripture:

“You have heard that it was said, 'Eye for eye, and tooth for tooth.' [39] But I tell you, do not resist an evil person. If someone strikes you on the right cheek, turn to him the other also. [40] And if someone wants to sue you and take your tunic, let him have your cloak as well. [41] If someone forces you to go one mile, go with him two miles. [42] Give to the one who asks you, and do not turn away from the one who wants to borrow from you.
[43] “You have heard that it was said, 'Love your neighbor and hate your enemy.' [44] But I tell you: Love your enemies and pray for those who persecute you.

If Robert is right… if this revenge is compromising his beliefs and changing who he is… is it worth it? Is it worth losing his soul?

Then Peter came to him and asked, “Lord, how often should I forgive someone who sins against me? Seven times?”
[22] “No!” Jesus replied, “seventy times seven!
[23] “For this reason, the Kingdom of Heaven can be compared to a king who decided to bring his accounts up to date with servants who had borrowed money from him. [24] In the process, one of his debtors was brought in who owed him millions of dollars. [25] He couldn't pay, so the king ordered that he, his wife, his children, and everything he had be sold to pay the debt. [26] But the man fell down before the king and begged him, 'Oh, sir, be patient with me, and I will pay it all.' [27] Then the king was filled with pity for him, and he released him and forgave his debt.
[28] “But when the man left the king, he went to a fellow servant who owed him a few thousand dollars. He grabbed him by the throat and demanded instant payment. [29] His fellow servant fell down before him and begged for a little more time. 'Be patient and I will pay it,' he pleaded. [30] But his creditor wouldn't wait. He had the man arrested and jailed until the debt could be paid in full.
[31] “When some of the other servants saw this, they were very upset. They went to the king and told him what had happened. [32] Then the king called in the man he had forgiven and said, 'You evil servant! I forgave you that tremendous debt because you pleaded with me. [33] Shouldn't you have mercy on your fellow servant, just as I had mercy on you?' [34] Then the angry king sent the man to prison until he had paid every penny.
[35] “That's what my heavenly Father will do to you if you refuse to forgive your brothers and sisters in your heart.”

ASK ONE OR TWO: In this passage, Peter asked Jesus how often we should forgive a person who does wrong against us. (Peter even took the common Rabbinic teaching of forgiving three times, doubled it and added one for good measure) Jesus responds with an answer that basically means “there is no limit to forgiveness.” Then he illustrates it with a story. In the story, what did the king do to the servant when the servant couldn’t pay his debt?


Wrap Up:
God wants to give us forgiveness… but we can’t accept that gift if our hands are full!

God has shown us mercy by forgiving us for everything we’ve ever done. We CAN accept this free gift of forgiveness if we are simply willing to let go of everything and trust in him to forgive us. Letting go of “everything” means, “letting go of our hate.” If we can’t let go of that… then our hands aren’t empty to receive God’s free gift.

Closing Exercise:
Close your eyes for a moment and think of yourself and not those around you. Are you holding a grudge against someone? Is there someone that you feel unwilling to forgive? God wants to free you from that torture chamber of bitterness. He wants you to be free tonight.

With your eyes closed and your heads bowed, I want you to do something. Everyone stick your right hand out in front of you like you’re holding something in front of you. With your eyes still closed, make a fist really tight. Now picture yourself holding on to that bitterness or hate that you might have inside you. Maybe for some of you it’s not hate… maybe it’s just a dislike of someone. Maybe it’s just someone that drives you nuts. Make a fist and squeeze that dislike, that frustration, that bitterness.

While you’re squeezing… picture something, picture God wanting to give you mercy and forgiveness. He’s asks you to do one thing: let go of that other thing. Right now he asks you to open your hand and let go of that hatred, that dislike, that frustration, that bitterness… whatever it is. Do that right now. Open your hand.

If you can do that… God has a free gift to give you.