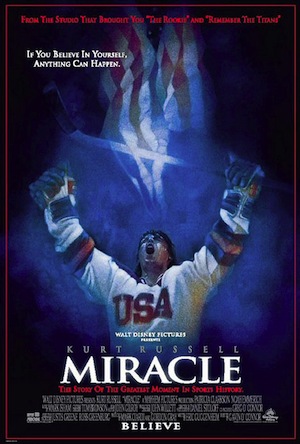 Main Point of Discussion: God is looking for those with the right hearts, not necessarily the right skills or talents.

The Movie Clip: Are you the right player?

Disney's Miracle tells the true story of Herb Brooks (Kurt Russell), the coach who led the 1980 U.S. Olympic hockey team to victory over the seemingly invincible Russian squad. Miracle is a powerful underdog story, empowering and captivating, and very clean in its language and themes.

This clip takes place about 14 minutes into the movie when the assistant coach looks at the final roster Brooks put together on just the first day of what is supposed to be weeklong tryouts and says, “You’re kiddin’ me, right?….You’re missing the best players.” Brooks, who obviously knows what he wants in a team, replies, “I’m not looking for the best players; I’m lookin’ for the right players.”

1 Samuel 16:5-13 (NLT)
“Yes,” Samuel replied. “I have come to sacrifice to the Lord. Purify yourselves and come with me to the sacrifice.” Then Samuel performed the purification rite for Jesse and his sons and invited them, too.
[6] When they arrived, Samuel took one look at Eliab and thought, “Surely this is the Lord's anointed!” [7] But the Lord said to Samuel, “Don't judge by his appearance or height, for I have rejected him. The Lord doesn't make decisions the way you do! People judge by outward appearance, but the Lord looks at a person's thoughts and intentions.”
[8] Then Jesse told his son Abinadab to step forward and walk in front of Samuel. But Samuel said, “This is not the one the Lord has chosen.” [9] Next Jesse summoned Shammah, but Samuel said, “Neither is this the one the Lord has chosen.” [10] In the same way all seven of Jesse's sons were presented to Samuel. But Samuel said to Jesse, “The Lord has not chosen any of these.” [11] Then Samuel asked, “Are these all the sons you have?”
“There is still the youngest,” Jesse replied. “But he's out in the fields watching the sheep.”
“Send for him at once,” Samuel said. “We will not sit down to eat until he arrives.”
[12] So Jesse sent for him. He was ruddy and handsome, with pleasant eyes. And the Lord said, “This is the one; anoint him.”
[13] So as David stood there among his brothers, Samuel took the olive oil he had brought and poured it on David's head. And the Spirit of the Lord came mightily upon him from that day on. Then Samuel returned to Ramah.

: Before we get started, let's go around the circle and share your name and your favorite sport or activity.

Galatians 5:22-25 (NIV)
But the fruit of the Spirit is love, joy, peace, patience, kindness, goodness, faithfulness, 23 gentleness, and self-control. Against such things there is no law. 24 Those who belong to Christ Jesus have crucified the sinful nature with its passions and desires. 25 Since we live by the Spirit, let us keep in step with the Spirit.

Wrap Up:
It's been said that D.L. Moody, a great 19th century preacher, heard words during a visit to Britain that made him hungrier for a deeper Christian experience and marked a new era in his life. The words were spoken to him by Henry Varley, a well-known evangelist at the time, as they sat in a public park. The words were: “The world has yet to see what God will do with and for and through and in and by the man who is fully consecrated to Him.” “He said 'a man,'” thought Moody, “He did not say, a great man, nor a learned man, nor a smart man, but simply 'a man.' I am a man, and it lies with the man himself whether he will or will not make that entire and full consecration. I will try my utmost to be that man.” The words kept ringing in his mind, and burning their way into his soul until finally he was led into the deeper, richer, fuller experience for which his soul yearned.

Will you be that kind of man or woman?