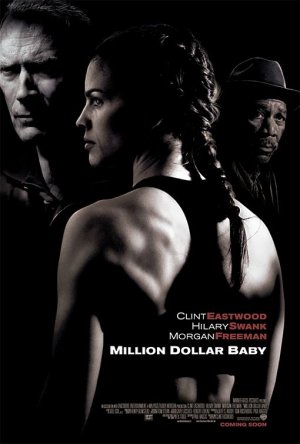 Main Point: We must let nothing move us, since the victory is ours.

This movie is about a female boxer (Hilary Swank), and her determination to make it big with the help of a coach (Clint Eastwood), who has made a vow to never train female boxers. The movie itself isn’t one that I would watch with my junior highers or even high schoolers, mostly because of the tragic ending, the issues it brings up, and the frequent swearing of Clint Eastwood. But the movie has a great character in Hilary Swank, as she refuses to ever be beaten. Her determination as a boxer is much to be desired.

Clip: So what are you going to do about it?
This particular clip is in the middle of Chapter 19 on the DVD. The timer is right around 67:23 (right before you hear Morgan Freeman’s voice) and ends after the fight is over, which is around 69:40. The clip is pretty short and has a great boxing scene in it. It begins with Hilary Swank getting beaten by her opponent. The round ends and she goes to her corner. She asks Clint Eastwood why she can’t get any punches in, and Clint Eastwood answers straight up: “She’s a better fighter than you.” In the next round, Swank mops the floor with her opponent. It’s beautiful. (Note: one problem many might have with the scene is that it does have a shot of a provocatively dressed girl holding the Round 2 sign. Be sure you watch the scene and are comfortable showing this scene to your audience.) The scene itself is a beautiful display of what it is to have courage and to be energized by what seems like an impossible situation.

(narrating) She wasn’t the main attraction. She was only on the card of a middleweight title fight. But ask someone who was there. They couldn’t tell you who else fought that night.

(The ladies box the first round. After the bell, they return to their corners.)

DUNN: You know why that is?

DUNN: She’s a better fighter than you are, that’s why. She’s younger, she’s stronger, and she’s more experienced. Now, what are you gonna do about?

(Bell rings and the boxing begins again. Maggie knocks the girl down and the ref gives her a ten-count. Maggie has won and the crowd erupts.)Transitional Statement:
It would be so wonderful if life were this easy. Perhaps the problem is that too many people give up too easily. Would life be different if we all could allow ourselves to be energized by impossible situations, instead of letting them bring us discouragement? Maggie hears that her opponent is a better fighter than she is. And this is exactly what she needs to hear. Her determination makes her realize that the victory is already hers, no matter how unbeatable her foe seems to be. Perhaps we need to look around us and realize who the victory actually does belong to. What do we do when our walk with Christ seems too difficult, or there seem to be unbeatable obstacles in our way?

1 Corinthians 15:56-58
The sting of death is sin, and the power of sin is the law. But thanks be to God! He gives us the victory through our Lord Jesus Christ. Therefore, my dear brothers, stand firm. Let nothing move you. Always give yourselves fully to the work of the Lord, because you know that your labor in the Lord is not in vain.

Wrap-Up:
Every Christian has times in their life when it seems their efforts just aren’t good enough. Whether it’s a sin issue, or there is a person we just can’t seem to get through to in ministry, there is always something trying to tell us that we are the weaker fighter. But perhaps this is exactly what we need to hear. Perhaps these impossible situations are exactly what we need. We must remember that victory only comes from Christ. Paul says that Christ has already brought us victory, and that nothing we do in the Lord is in vain. Nothing. Every little punch we throw, every little step we take in the Lord is victory in itself. We must stand firm. We must not be moved. Christ has given us victory. So when we go out into our walk, and we meet challenges in our lives that seem like they may be too great, instead of allowing ourselves to be discouraged, let’s buckle up, take a breath, and let’s do something about it.