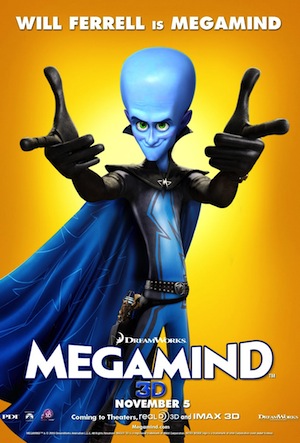 (Dreamworks, 2010)
Main Point: No matter how terrible our circumstances are – or how terrible we’ve been treated – we never get God’s permission to do evil.

The Movie Clip:
Megamind was one of my favorite movies of 2010. It had a star-packed cast of Will Ferrell (Megamind), Brad Pitt (Metroman), Tina Fey (Roxanne Ritchie) and Jonah Hill (Hal/Titan), and provided plenty of laughs for me and my 5 year old son.

The movie centered on the rivalry between the evil Megamind and the beloved Metroman, both of whom were sent to Earth by their respective planets. Megamind was definitely given a poor start in life, while Metroman seemed to have it all. Finally, Megamind caved and just decided to be a bad guy in life; it seemed like it was his destiny after all.

The movie then follows their ensuing battles as one champions good, while the other embodies evil. In the end, the good guy wins, but it’s not who you think.

Introducing the Clip:
I want to show you a hilarious scene from Megamind – in fact, it’s the opening scene of the movie. For those of you who’ve watched the movie, you know this film is funny. But as you watch it, I want you to key in on all the differences between Megamind and Metroman: their upbringing, their experiences, their thoughts, their abilities, their decisions. Because, in the end, these two characters come to radically different conclusions about their destiny on Earth.

This is a rather long clip – over 6 minutes in length. Instead of supplying the transcript of the opening monologue (all by Megamind), I’ll just share the highpoints of the movie’s set up:


Megamind begins on a foreign planet that is doomed to destruction, even though Megamind calls his childhood “fairly standard.” The “broken home” that he alludes to is his home planet’s self-implosion. He was only 8 days old when he was separated from his parents, whose last words of encouragement were not clear. (His father said, “You are destined for….”)

As his survival pod rocketed across space, he literally bumped into another baby (who would turn out to be his rival, Metroman). Both babies land on earth; Metroman in the lap of luxury, and Megamind in a prison. Megamind simply says, “Even fate picks its favorites.”

In prison, Megamind was taught lies by the crooks behind bars. Even when he was finally able to go to school – or shewel as he called it – he never really fit in with the others. He was always picked last…and sometimes picked on.

He constantly compared himself to Metroman and discovered that “being bad is the one thing I’m good at.” He finally comes to the conclusion that “If I was the bad boy, I was going to be the baddest boy of them all.” We then see how he terrorizes the school kids and teacher.

In the end, we hear Megamind say, “The die had been cast.”

He concludes the scene by introducing himself as, “Megamind, incredibly handsome criminal genius and master of all villainy.”
END CLIP at 0 hours 6 minutes and 18 seconds.

Transitional Statement:
Wow, there were a lot of differences between the childhood of Megamind and Metroman. It seemed as though Metroman was given the best of everything while Megamind was sabotaged from the start. In fact, Megamind said, “Even fate picks its favorites,” and later, “The die had been cast.” In short, Megamind believed he was created to be a villain and would spend the rest of his life living up – or down – to that belief. But let’s take a look at Megamind’s belief to see if it truly holds weight in our own lives.

Psalm 57 (NIV)
Have mercy on me, O God, have mercy on me, for in you my soul takes refuge. I will take refuge in the shadow of your wings until the disaster has passed. I cry out to God Most High, to God, who fulfills his purpose for me. He sends from heaven and saves me, rebuking those who hotly pursue me. Selah.

God sends his love and his faithfulness. I am in the midst of lions; I lie among ravenous beasts— men whose teeth are spears and arrows, whose tongues are sharp swords.

Be exalted, O God, above the heavens; let your glory be over all the earth. They spread a net for my feet— I was bowed down in distress. They dug a pit in my path— but they have fallen into it themselves. Selah’

My heart is steadfast, O God, my heart is steadfast; I will sing and make music. Awake, my soul! Awake, harp and lyre! I will awaken the dawn. I will praise you, O Lord, among the nations; I will sing of you among the peoples. For great is your love, reaching to the heavens;
your faithfulness reaches to the skies. Be exalted, O God, above the heavens; let your glory be over all the earth.

NOTE TO LEADER: At this juncture, you may want to point out that this psalm was written by David during an incredibly trying and defining time in his life. History tells us that this psalm was written by David when he had been chased into a cave by King Saul, the man who was trying to kill David for no good reason. In fact, on several occasions, Saul had tried to kill David with his own hands.

1 Samuel 24 tells the whole story, but the basic plot is this: King Saul was hunting down David who was on the run with a few men. David was hiding in a cave when Saul’s army rolled up, unbeknownst that the wanted fugitive was just a stone’s throw away. To add further stress, King Saul walked into the dark cave to use the bathroom, not knowing that David lurked in the darkness. David’s men tell him to strike the king dead, but David refuses to do evil…in spite of the evil done to him. In other words, just because David’s circumstances had been bad, he knew he did not have God’s permission to do evil.

Wrap Up:
In our time together, we took a look at a funny clip that caused us to do a lot of thinking. In that scene, we watched a guy react to his bad circumstances, ultimately becoming a bad guy. Recognizing that everything about his entire existence had been bad, he just decided to be bad, himself.

Truth be told, some of us feel that way. We think that since we’ve been treated poorly, we have the right to treat others poorly in response. In short, we repay evil with evil.

But then we read a psalm from the life of David before he became king. In that song, we discover David saying, “My life is terrible! I’ve been treated so horribly! People are literally trying to kill me!” But in spite of those circumstances, he continues by saying, “I will choose to honor God with my life.”

That’s not easy. It’s not easy, at all! But we should follow David’s lead in this area of our lives. We cannot repay evil with evil. If we do that, we hurt others, and dishonor God.

Regardless of our situation, God wants us to know it’s never gonna be cool with Him to choose evil.

I know that’s difficult, so I want to spend some time in prayer as we close up our time together. Let’s get in groups of 3 or 4 and just pray about the situations we’ll face this week. Let’s ask God to grant us strength to respond in a godly and loving way.