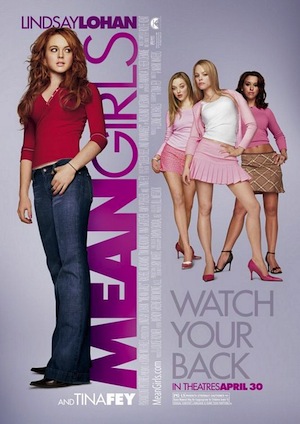 (Paramount, 2004)
Main Point of Discussion: If we only look for beauty on the outside, we will be disappointed.

The Movie Clip: Apparently there’s a lot that can be wrong with your body. The movie Mean Girls was about just that: girls who felt they had to play others down so they could be elevated in social standings. Even though there were some funny parts, the movie also made some great points about how most of us truly feel when going through the pressures of high school and adolescence.

Cady Keron (Lindsay Lohan) grew up in Africa and was home-schooled because of her parents’ work. But when the family moves back to America, Cady has to attend public school. There she meets “The Plastics,” a trio of girls who are more concerned with what others think of them than anything else in the world. The PG-13 movie shows what Cady goes through as she tries to infiltrate this social clique.

Introducing the Clip:
In the movie, Mean Girls, Cady Heron (played by Lindsay Lohan) grew up in Africa, but had to move back to America during her high school years. She’s met a group of girls called “The Plastics” who are superficial in almost every way imaginable, and are only concerned with the way they look and what other people think of them. In this scene I want to show you from the film, notice the difference between the girls’ thoughts concerning self-image.

(The girls pull up to the mansion in the silver Lexus and all get out. As they walk inside, they are greeted by Regina’s mom. They chit chat for a moment, and then the girls enter Regina’s room.)

Cady: This is your room?

Regina: It was my parents’ room, but I made them trade me. Hey put on 98.8. Cady, do you even know who sings this?

Karen: God! My hips are huge!

Regina: At least you guys can wear halters. I’ve got man shoulders.

(Cady thinks to herself, “I used to think there was just fat and skinny. Apparently, there are a lot of things that can be wrong on your body.”)

Gretchen: My hairline is so weird.

Regina: My pores are huge.

(The Plastics all turn to Cady, expecting her to join in with their distaste of themselves.)

Cady: I have really bad breath in the morning.

1 Peter 3:3-6 (NIV)
3Your beauty should not come from outward adornment, such as braided hair and the wearing of gold jewelry and fine clothes. 4Instead, it should be that of your inner self, the unfading beauty of a gentle and quiet spirit, which is of great worth in God's sight. 5For this is the way the holy women of the past who put their hope in God used to make themselves beautiful. They were submissive to their own husbands, 6like Sarah, who obeyed Abraham and called him her master. You are her daughters if you do what is right and do not give way to fear.

Wrap Up:
We’ve spent the last hour talking about the importance of focusing on our inner selves instead of our outward appearances. This isn’t easy, especially in the culture that we live in here in America. But, there are tons of good reasons to do this. First, we won’t be devastatingly disappointed if we discover some minor, superficial flaw in our “exterior.” Secondly, we won’t be distracted from focusing on what God wants us to focus on, which is what’s inside us. Finally, we will please God because what’s inside us is what He values.

When I say this isn’t easy to do, I really mean it. Lots of people make mistakes by focusing on the outer appearances of themselves and others. A really holy man from the Bible named Samuel did this one time. Basically, God asked him to find the next king for Israel and instead of looking for a person who had a strong, godly inner-self, he focused on the tallest and best looking person for the job. God had to remind Samuel what’s really important. Check out what the Bible says in 1 Samuel 16:6-7:

“When they arrived, Samuel took one look at Eliab and thought, ‘Surely this is the Lord’s anointed!’ But the Lord said to Samuel, ‘Don't judge by his appearance or height, for I have rejected him. The Lord doesn't make decisions the way you do! People judge by outward appearance, but the Lord looks at a person’s thoughts and intentions.’”
Guys, there’s nothing wrong with taking care of our bodies; in fact, the Bible talks about taking care of our bodies because they are the dwelling place of God. But, if we are not really careful, we will become vain, and focus on our bodies when we should be focused on our inner selves.