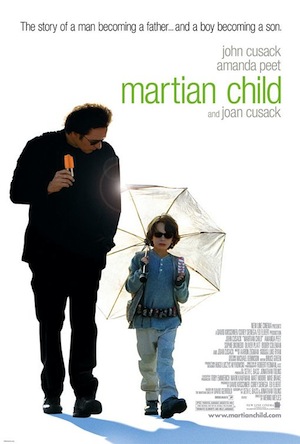 The Movie Clip: “Nothing will change the way I feel about you.”

Martian Child is a 2007 comedy-drama film about a writer who adopts a strange young boy who believes he is from Mars. Martian Child was released on November 2, 2007. The film stars John Cusack, Joan Cusack, and Bobby Coleman. The MPAA rating system rated the film with a PG for thematic elements and mild language.

David Gordon (John Cusack) has just lost his wife Mary and is looking to adopt a young boy named Dennis (Bobby Coleman) who believes he is from Mars. After adopting the boy from Sophie (Sophie Okonedo), he manages to bring Dennis out of the Amazon box in which he stays to hide from the sun. He teaches the boy how to be an “earthling” and earns Dennis' love in the process with the help of his sister Liz (Cusack's real life sister Joan).

Introducing the Clip:
Many times Christians struggle with their view of God as our heavenly father because their relationship with their human father. Tonight we’re going to take a look at a scene from the film Martian Child that is a great example of what unconditional love from a dad looks like.

(The scene opens with David sitting at his laptop typing while Dennis comes up behind him with a camera. Dennis snaps a pic which startles David. As David whirls around in his chair, he knocks the camera out of Dennis' hands and it shatters on the floor.)

Dennis: Was I bad?

David: No! You weren't bad! And you gotta stop saying that, alright? I don't want you to cut your feet and daddy's… I'm in here working. We gotta put this camera away for a little while, OK?

Dennis: But I haven't finished my mission.

David: Well you have for today.

Dennis: But I haven't finished my mission! Gimme my camera back! I need it!

David: Hey. You gotta calm down, and I gotta go to work. Or you can go to your room.

Dennis: Are you gonna send me away, arent' you?

David: Dennis, why would I send you away?

Dennis: Because you're mad at me. Because I broke your stuff.

David: Dennis, I don't care about any of that stuff. It's just stuff. There's nothing that you can do that would change the way I feel. Do you understand? I'm not gonna ever send you away. (Grabbing a lampshade and breaking it on the floor…) Look, it's just stuff.

(Dennis quietly meanders over to David's desk where he picks up a figurine and tosses it onto the floor.)

END CLIP AT 56 minutes and 35 seconds when there's a knock on the window.

Transitional Statement:
This clip is a great picture of what is really at the heart of God’s unconditional love for His children- which is a desire for a solid and permanent relationship that has no strings attached. Just like the clip demonstrates, even when we make mistakes, God loves us the same.

So the father divided the property between them. It wasn't long before the younger son packed his bags and left for a distant country. There, undisciplined and dissipated, he wasted everything he had. After he had gone through all his money, there was a bad famine all through that country and he began to hurt. He signed on with a citizen there who assigned him to his fields to slop the pigs. He was so hungry he would have eaten the corncobs in the pig slop, but no one would give him any.

That brought him to his senses. He said, “All those farmhands working for my father sit down to three meals a day, and here I am starving to death. I'm going back to my father. I'll say to him, 'Father, I've sinned against God, I've sinned before you; I don't deserve to be called your son. Take me on as a hired hand.'” He got right up and went home to his father.

When he was still a long way off, his father saw him. His heart pounding, he ran out, embraced him, and kissed him. The son started his speech:

But the father wasn't listening. He was calling to the servants, “Quick. Bring a clean set of clothes and dress him. Put the family ring on his finger and sandals on his feet. Then get a grain-fed heifer and roast it. We're going to feast! We're going to have a wonderful time! My son is here–given up for dead and now alive! Given up for lost and now found!” And they began to have a wonderful time.

All this time his older son was out in the field. When the day's work was done he came in. As he approached the house, he heard the music and dancing. Calling over one of the houseboys, he asked what was going on. He told him, “Your brother came home. Your father has ordered a feast–barbecued beef!-because he has him home safe and sound.”

The older brother stalked off in an angry sulk and refused to join in. His father came out and tried to talk to him, but he wouldn't listen. The son said, “Look how many years I've stayed here serving you, never giving you one moment of grief, but have you ever thrown a party for me and my friends? Then this son of yours who has thrown away your money on whores shows up and you go all out with a feast!”

His father said, “Son, you don't understand. You're with me all the time, and everything that is mine is yours– but this is a wonderful time, and we had to celebrate. This brother of yours was dead, and he's alive! He was lost, and he's found!'” (Luke 15:11-32 The Message)

Give each student a piece of lined paper. Say something like – “Maybe lately you have been a little like one of the two sons in the story. Either you have wandered away from home, or you have been unhappy with God or judgmental towards your brother and/or sisters in Christ. Take some time to evaluate yourself to see if you need to have a heart to heart talk with your Daddy. Write a thank you letter to your Father, thanking Him for adopting you into the greatest family in the universe and loving you unconditionally.”

Close in Prayer – (give invitation)