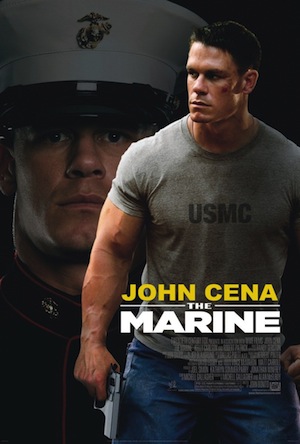 Main Point of Discussion: If we don’t manage our anger, it can lead to a life of regret.

The Movie Clip: “We Kindly Ask You to Leave”

The Marine stars WWE wrestling superstar John Cena as John Triton, a former marine who was kicked out of the military for disobeying orders after single-handedly rescuing his fellow marines from an imminent beheading (he was ordered to stand down). John struggles with life direction and ends up locked in a new battle with diamond thieves who kidnap his wife.

Violence and sexual innuendo make it inappropriate to show the whole movie to a youth group, but John Cena’s popularity in the wrestling world make this clip especially appealing to students.

Introducing the Clip:
Have you ever been in a position where your patience was tested? A situation where you could feel your temper ready to explode? I can pretty much guarantee that most of us have indeed found ourselves in that situation at some time in our lives.

Tonight we'll look at a clip from the movie The Marine with wrestling superstar John Cena. John was recently kicked out of the marines and now, on the first day of his new job, has been pushed and tested to the breaking point by a spoiled guy with two bodyguards and an incredibly bad attitude! As John escorts him out of the building, we get to see the result when anger gets the best of us.

BEGIN CLIP AT 16 minutes and 32 seconds (Chapter 4). Be sure to get the timing set just right, as only seconds before a foul word is used in reference to the security guards.

John Triton: We kindly ask you to leave the premises sir. Thanks.

Drake: Seriously, just spit-balling here, now tell me if I’m close. Right out of high school, straight into the military, realized you’d never be all you thought you could be and that’s how you ended up a rent-a-cop. (Laughs and looks around at bodyguards)

(John grabs Drake’s arm again to force him out of the building when one of Drake’s bodyguards takes a swing at him.)

Other Security Guard: (Steps in between John. and the bodyguard) Whoa, whoa, whoa…hey…Wait a minute! Wait a minute!

John Triton: The genie (referring to the bodyguard) just tried to hit me man!

Bodyguard: (Pokes OSG in the chest with his finger) Yeah, well you better tell your boyfriend to back off!

Other Security Guard: Unfortunately for the genie this is not one of those times!

(A fight ensues with both of Drake’s bodyguards knocked out and Drake thrown through the front window of the building.)

Drake: (Dusts himself off as he rises from a pile of broken glass.) It’s on now! See you really messed up! Somewhere, somehow, somebody just got all that on video. By the time you go to sleep tonight I’m going to own this building! And tomorrow, don’t be late! ‘Cause when you clock in…YOU’RE FIRED!!!

(End clip as Drake finishes his rant.)END CLIP AT 18 minutes and 19 seconds.

Transitional Statement:
Clearly John was pretty angry. Sure those guys incited what happened and we get a laugh out of the result, but what would God want from us in a situation like that? John reacted and it cost him his job, the second time he had been fired in a week.

Most movies tell us that this is how we should respond when we’re angry. Are the movies correct?

Some of us here tonight might call ourselves “believers” in Christ. What would God want from us in a similar situation? Would God want us to react the way John did? What does God even say about anger and our management of it?

Let’s look at an example of what can happen to a life when anger is left unchecked and unmanaged.

Genesis 4:2-8 (NIV)
[2b] Now Abel kept flocks, and Cain worked the soil. [3] In the course of time Cain brought some of the fruits of the soil as an offering to the LORD. [4] But Abel brought fat portions from some of the firstborn of his flock. The LORD looked with favor on Abel and his offering, [5] but on Cain and his offering he did not look with favor. So Cain was very angry, and his face was downcast.

[6] Then the LORD said to Cain, “Why are you angry? Why is your face downcast? [7] If you do what is right, will you not be accepted? But if you do not do what is right, sin is crouching at your door; it desires to have you, but you must master it.”[8] Now Cain said to his brother Abel, “Let's go out to the field.” And while they were in the field, Cain attacked his brother Abel and killed him.

Finish the story with what happened to Cain as a result of killing his brother.

Read the rest of following passage:

[13] Cain said to the LORD, “My punishment is more than I can bear. [14] Today you are driving me from the land, and I will be hidden from your presence; I will be a restless wanderer on the earth, and whoever finds me will kill me.”

Break into groups of two (three if there are not enough guys or girls to make even groups) and share with them about something that may be making you angry now, or about a time in the past when you lost your cool and are still struggling with the regret that usually follows those moments. Pray for each other that God would give you the strength to “master” your anger by using the ideas we discussed earlier.
Wrap Up:
A life of anger is often a life of regret. In Cain’s anger he committed an act that he would regret and would follow him around for the rest of his life. Yet, God shows us his story so that we might learn from it and see that managing our anger is a vital part of leading healthy lives.

No one is perfect, we all make mistakes that we regret and, thankfully, Jesus forgives us for those times. As we manage our anger, however, we find less regret in our lives and discover we can live more and more like Jesus.

CLICK HERE for a complete sermon on the topic of anger.