Lord of the Rings-Fellowship (Spiritual Gifts) 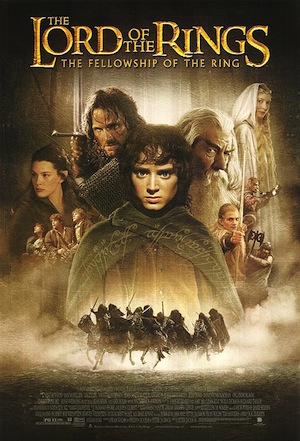 (New Line Home Cinema, 2001)
Main Point: As Christians, we are each given spiritual gifts by the Holy Spirit to accomplish the will of God.

Lord of the Rings: Fellowship of the Ring was the first movie in a major motion picture trilogy based on the writings of J.R.R. Tolkien. It brought to the silver screen the story we all loved as kids. Frodo Baggins inherits a very special ring from his uncle and then discovers its world-changing power. He learns that his life, and the life of all of Middle Earth, hinges on him destroying the ring.

Helping Frodo in his quest to destroy the One Ring is three of his fellow hobbits, a wizard, a ranger, a fighter, an elf, and a dwarf. Together they set out for the shadow lands of evil Mordor bent on destroying the ring before it destroys all of them.

The film is rated PG-13 for epic battle sequences and some scary images… like Orcs!

IMPORTANT NOTE: For this clip, you MUST have the special extended edition of the DVD! This scene is not on the VHS copy.

Introducing the Video Clip:
One of my favorite movies is The Lord of the Rings: The Fellowship of the Ring. I like it because it pits the quintessential little guy, Frodo, against the most evil, vile, and powerful force known to Middle Earth, Sauron. We’ve all seen the film, but let me draw your attention to a special scene where Frodo and his companions are leaving the Woods of Lorien. As they depart, the Lady of the Wood, Galadriel, and the other elves give each of the heroes a special gift to help them on their journey. Check out the gifts they receive, and how they respond.

Elf: Never before have we clad strangers in the garb of our own people. May these cloaks help shield you from unfriendly eyes.

Legolas: (looking in his knapsack as they pack the boats for the journey) Lembas. Elvish waybread. One small bite is enough to fill the stomach of a grown man.

Merry: How many did you eat?

Pippin: Four. (he then burps)

Elf: Every league you travel south, the danger will increase. Mordor Orcs now hold the eastern shore of the Anduin. Nor will you find safety on the western bank. Strange creatures bearing the mark of the White Hand have been seen on our borders. Seldom do Orcs journey in the open under the sun, yet these have done so. (He then gives Aragorn a dagger.) You are being tracked. By river you have the chance of outrunning the enemy to the Falls of Rauros.

(The scene then shifts to the fellowship departing Lorien. Viewers are shown what each of the brave members received as gifts to help them in their journey.)

Galadriel: My gift to you, Legolas, is a bow of the Galadhrim. Worthy of the skill of our woodland kin. (Two hobbits, Merry and Pippin, each receive a dagger.) These are the daggers of the Noldorin. They have already seen service in war. Do not fear, young Peregrin Took. You will find your courage. And for you Samwise Gamgee, Elven rope made of hithlain.

Sam: Thank you, my lady. (Looking around at what his buddies got…) Have you run out of those nice, shinny daggers?

Galadriel: And what gift would a dwarf ask of the Elves?

Gimli: Nothing. Except to look upon the lady of the Galadhrim one last time for she is more fair than all the jewels beneath the earth. Actually, there was one thing. No, no, I couldn’t. It’s quite impossible. Stupid to ask.

Galadriel: (To Aragorn) I have nothing greater to give than the gift you already bear. (To Frodo) Farewell Frodo Baggins. I give you the light of Earändil, our most beloved star. May it be a light for you in dark places when all other lights go out.

Gimli: I have taken my worst wound at this parting having looked my last upon that which is fairest. Henceforth I will call nothing fair unless it be her gift to me.

Legolas: What was her gift?

Gimli: I asked her for one hair from her golden head. She gave me three. END CLIP AT 1 hour 7 minutes and 17 seconds.

Transitional Statement:
Did you notice the gifts that each of the companions received? Most of them received a cloak, several of them received a special dagger, they all received food, and a couple of them received exotic gifts like light or a lock of hair. This scene paints a similar picture of how the Holy Spirit gives us gifts to accomplish the will of God. Like some of the heroes in this clip, some of us receive the same kind of gift; or like the other heroes, we may receive very different kinds of gifts. Our task is to use whatever gift we are given by the Holy Spirit to accomplish God’s will.

Say:
You may not know it, but the Holy Spirit gives each Christian spiritual gifts to accomplish the will of God in their lives. Unfortunately, these “spiritual gifts” have been the source of great confusion and argument over the years. Let’s take a look at an important passage on the subject so we will not be confused on the subject.

12The body is a unit, though it is made up of many parts; and though all its parts are many, they form one body. So it is with Christ. 13For we were all baptized by one Spirit into one body—whether Jews or Greeks, slave or free—and we were all given the one Spirit to drink.


Wrap Up:
Tonight we got a chance to watch a cool scene from a great movie. In it, our heroes received very special gifts from the Elves that would help them save Middle Earth.

OK. None of us are trying to save Middle Earth… cause it doesn’t exist… but in one very real sense, we are trying to save the world. We are part of the church – the body, as Paul put it in 1 Corinthians 12. Our job, our mission from God, is to help save people from sin and death and hell. Last time I checked… that was a HUGE job!!

Guys, we are all important. Every single believer in Jesus Christ has been given at least one gift. Most of us have several gifts that have been given to us, and every one of them should be used by us to accomplish God’s will. If we don’t use our gifts that the Holy Spirit has given to us, God’s will may not be accomplished the way He desires. That means hurting people will be left out. That may mean that hungry people will be left empty. That could mean that lost people never hear about the love of Jesus that can save them.