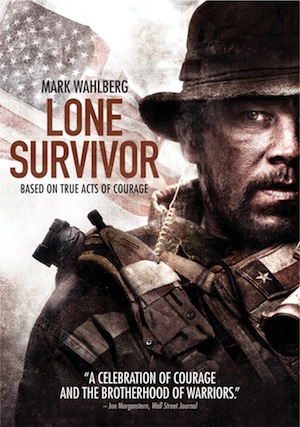 (Universal Pictures)
Main Point: Never Out of the Fight
Our lives, like soldiers caught in war, are full of trials and attacks, but during our time on earth we are never out of the fight and must encourage each other, hold each other up and persevere until Christ returns or our mortal life on earth ends and we meet Christ in heaven.

The Movie Clip:
The movie, Lone Survivor, is the story of Marcus Luttrell, a Navy Seal, and his team who set out on a mission to capture or kill notorious Taliban leader Ahmad Shah, in late June 2005. After running into mountain herders and capturing them, they were left with no choice but to follow their rules of engagement or be imprisoned. Marcus and his team were left to fight for their lives in one of the most valiant efforts of modern warfare.

In this scene, Marcus, the lone survivor, is rescued and rushed to a hospital for care. We hear his narration about his experience and camaraderie with his military brothers who didn’t survive and his outlook of non-stop perseverance.

Introducing the Clip:
I want to show you a clip from the movie, Lone Survivor, the story of Marcus Luttrell, a Navy Seal, and his team that were sent out on a mission to capture or kill a notorious Taliban leader in late June 2005. After running into mountain herders and capturing them, they were left with no choice but to follow their rules of engagement or be imprisoned. Marcus and his team were left to fight for their lives in one of the most valiant efforts of modern warfare.

In this clip Marcus is the only survivor left and we are shown his rescue and get to hear his thoughts on all that has happened and his incredible attitude on never giving up.

The Video Clip:
The clip for this resource can be found online (for a fee) on WingClips.com at the following link: http://www.wingclips.com/movie-clips/lone-survivor/never-out-of-the-fight

Transitional Statement:
Based on the clip we just watched you could see that Marcus Luttrell survived some pretty tough trials and deeply mourns his fallen, brave military brothers. He has lost much but through it all he has endured and continues to have an attitude that “the fight never ends” – he will keep persevering always.

In our lives, we have to keep the same attitude of perseverance and toughness. This world is gonna throw us everything it’s got and try to bring us down. Jesus told us to remember that if they persecuted him, they would persecute us also. (John 15:20) But if we persevere in our faith until the end, Christ will give us eternal life. Until that day comes, “we are never out of the fight.”

32Remember those earlier days after you had received the light, when you endured in a great conflict full of suffering.
33Sometimes you were publicly exposed to insult and persecution; at other times you stood side by side with those who were so treated.
34You suffered along with those in prison and joyfully accepted the confiscation of your property, because you knew that you yourselves had better and lasting possessions.
35So do not throw away your confidence; it will be richly rewarded.?36You need to persevere so that when you have done the will of God, you will receive what he has promised. 37For, “In just a little while, he who is coming will come and will not delay.” 38And, “But my righteous one will live by faith. And I take no pleasure in the one who shrinks back.” 39But we do not belong to those who shrink back and are destroyed, but to those who have faith and are saved.

Wrap Up:
Marcus Luttrell the Navy SEAL and his incredible story of perseverance is pretty inspirational. We as Christians are compared to soldiers in the Bible in multiple places (examples: Eph. 6:11-17 the armor of God; 2Tim. 2:3,4) and by the persecutions and trials we face or will face it makes a lot of sense why.

A soldier is taught to stand strong and to persevere because they must if they are to survive; that same attitude it essential for us too. There is much to focus on it keeping up that fight: standing together and upholding each other; remembering past experiences and successes; and keeping our eyes on God’s promises and eternal things. If we believe in Christ and have trust in Him alone we can know that our salvation is sure and we can have great confidence in this. He is beyond trustworthy. But during our time here until we are with Him, we must be a good soldier and persevere. Because our Commander has ordered it and the reward is great. Until that time when we are brought home, we must keep strong, because until that time… “you’re never out of the fight.”